The team collected so many high-resolution pictures that the duration of each flight was determined not by how much fuel the aircraft had left but instead by how much data storage remained for the imagery.

The team undertook the project in 2019, capturing over 60,000 overlapping aerial photographs of the new road and a large stretch of the adjoining Dempster Highway with a remotely piloted SeaHunter aircraft in one of the largest non-military remote sensing project of its kind.

The new two-lane, all-weather gravel highway snakes its way north for 86 miles, past the edge of the boreal forest and into the boundless tundra beyond, crossing numerous streams along the way that support fish populations integral to Indigenous communities in the region. These fish fall under the purview of Fisheries and Oceans Canada, which wanted to find a way to safely and effectively monitor potential changes to freshwater habitats.

“With the support of the local Fisheries Joint Management Committee and Government of Northwest Territories, Fisheries and Oceans Canada was excited to utilize the SeaHunter as an opportunity to test remotely piloted systems in Canada’s north, where access can be limited,” said Carolyn Bakelaar, a regional GIS coordinator for the department who helped oversee the project.

ACUASI is one of several Geophysical Institute facilities at the University of Alaska Fairbanks and is the largest UAS operator in the Arctic. ACAUSI had previously collaborated with Transport Canada to help with endangered whale monitoring in Canada’s busiest shipping lanes in the Gulf of St. Lawrence.

But the task was no small undertaking. To map the highway, the team first had to install an array of equipment onto the 300-pound SeaHunter aircraft and design a flight plan that would allow them to map the entirety of the Inuvik–Tuktoyaktuk Highway and a large portion of the Dempster.

ACUASI member Matthew Westhoff conducts a maintenance check on the aircraft prior to a flight as other local traffic operates on the airfield. (Photo: Eyal Saiet)

Once on site, the team worked with staff at the airport in Inuvik and Nav Canada to coordinate their surveys without disrupting the flight of anyone else in the area, which was more difficult than might be expected, given the size of the town.

“The Mike Zubko Airport in Inuvik is a logistics hub for the entire region, with routinely scheduled commuter, cargo and science missions departing and arriving almost constantly,” said Andrew Wentworth, the chief pilot and deputy program manager for the mission. 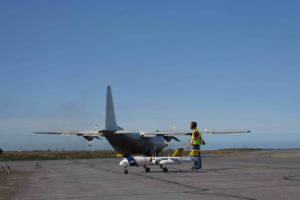 The SeaHunter was the first long-range, remotely piloted aircraft to fly out of the regional airport, queueing up between leviathan-like C-130 cargo planes and 737 passenger jets before taking off and landing during surveys.

Coordinated efforts between aviation officials and remotely piloted aircraft operators has been a primary focus of ACUASI staff and researchers for the past several years. The immense task was made more manageable by the groundwork put in place by a pre-arrival survey team of Transport Canada, ACUASI and Canadian aviation officials, along with a detailed logistics plan that was two years in the making.

Once in flight, the SeaHunter traversed thousands of miles, photographing every square inch of the roads in overlapping increments. Eyal Saiet, an ACUASI remote sensing specialist, stitched these photos together using a process called photogrammetry to create a detailed mosaic. The team collected so many high-resolution pictures that the duration of each flight was determined not by how much fuel the aircraft had left but instead by how much data storage remained for the imagery.

“The camera took photographs about once every second for nearly the entirety of the flight, which could sometimes last up to eight hours,” said Saiet.

The SeaHunter unmanned aerial aircraft took several thousand high-resolution photographs of the new Inuvik–Tuktoyaktuk Highway in the Northwest Territories, Canada, such as this photo of the ITH crossing Zed Creek. (Photo: Fisheries and Oceans Canada)

During the long flights, the team communicated with the aircraft and equipment onboard via a network of polar orbiting satellites, allowing them to estimate how many photographs had been taken and how much memory storage was still available.

Despite the workload, inclement Arctic weather and busy runway, the crew completed the surveys with just over a week’s worth of flights. But collecting the data was less than half the story. Back in Fairbanks, the painstaking process of analyzing some 60,000 photographs remained.

“Eyal had the dubious distinction of having to sort through sometimes terabytes of images,” said Wentworth.

In northern Canada, detailed mapping projects are sporadically carried out by manned aircraft and mapped with LiDAR, or by short-range drones at specific sites of interest. But unmanned aircraft, such as SeaHunter, are seen as a safer and more fuel-efficient means of generating high resolution imagery and elevation models over large areas.

“With a resolution of 6 cm, the Inuvik-Tuktoyaktuk Highway imagery can therefore show more detail than what is otherwise available.”

Both Wentworth and Saiet were recently given Immediate Awards by Fisheries and Oceans Canada in recognition of the meticulous and exacting work of mapping the highways.

With this project behind them, the team is looking forward to further collaboration with U.S. and Canadian agencies in the future. Their contract with Transport Canada to monitor North Atlantic right whales was recently renewed, meaning the crew and the SeaHunter expect to head back to the Atlantic this summer to resume their efforts at preventing whale-cargo vessel collisions.