The CM2000 extends the existing Galaxy family of lidar sensors and was purposely designed for lower altitude flight, with a maximum range (AGL) of 2000 m AGL. The sensor has a measuring rate of up to 2 million points per second, which means that every second the sensor is able to output 2 million points that are directed towards to the ground to enhance resolution of targets such as electric wires, distribution power poles and railway signs without any loss. Additionally, it has the ability to detect fine changes in the ground over time for pipeline monitoring.

A second noticeable product feature is the adjustable field of view (FOV), which means that depending on the application, the FOV can be opened up or made narrower by leveraging an oscillating scanner in the sensor. For example, different kinds of corridors (whether roads, highways or rail) come with different widths and would require a sensor that provides this flexibility.

A third feature of the sensor is that it has the smallest laser footprint on the market with a beam divergence of .16 milliradians, which means that the small laser footprint has a fairly high concentration of energy and is able to detect small targets, such as wires, electric towers and small poles. 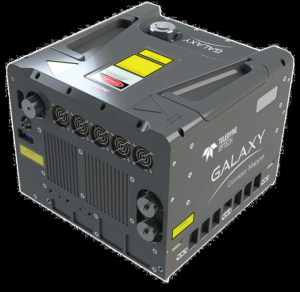 Just like other Galaxy sensors, the CM2000 comes with PulseTRAK and SwathTRAK technology included. PulseTRAK refers to the ability to plan and operate irrespective of flight zones while maintaining complete density on the ground, so that the user can fly regardless of how the terrain changes and make sure no ground coverage is missed due to blind zones. SwathTRAK is a technology that allows the FOV to react instantaneously in real-time to changes in terrain. Third, built-in roll compensation compensates for tilting in roll, while maintaining a fixed swath width on the ground. Fourth, a built-in position compensation that points the FOV towards the planned location, ensures that whatever is planned will be collected even though there may be rapid changes in the horizontal or vertical position of the aircraft.

In a recent webinar, Teledyne Optech shared some more details on the new product release. For example, the Galaxy CM2000 has a maximum range of 2000 meters AGL and a maximum scan angle of 60 degrees (± 30 degrees FOV). Compared with the Galaxy T2000 sensor, the CM2000 has various differences that are all related to its focus on corridor mapping: a scan FOV of 20-60 degrees, a lower maximum altitude AGL (2000 m versus 6500 m) and a looser eye-safety rating of Class 3B (versus 4 for the T2000). Finally, there are no export restrictions for the Galaxy CM2000, that ships with an ITAR-free IMU-57 and embedded Applanix AP60 OEM board set, while lidar data and camera image processing and georeferencing are provided by the Optech Lidar Mapping Suite.