During the Year in Infrastructure 2014 conference, Siemens and Bentley announced a new step in their collaboration—the introduction of Bentley’s Vortex point-cloud technology into Siemens PLM’s Tecnomatix software. According to a release from the two companies, “This will enable users of Siemens’ product lifecycle management (PLM) software solutions to work from enhanced 3D digital models of existing factories in their “as-operated” conditions – by leveraging the models created from point clouds captured through scanning.”

I caught up with Siemens’ Al Hufstetler, Vice President, Product Management, Manufacturing Engineering Software, who had this to say about the benefits of this development: “In the digital engineering and digital manufacturing space, our customers are constantly going through updating and optimizing their existing plants. So this whole notion of being able to scan the as-built and as-produced plant, and using that as my model to make changes to the plant is really the big cost saver.”

Imagine that you are a manufacturer and you build a plant, he says. Then, two years later you want to build a new product and need to validate the changes to be made to the plant. Do you start modeling the whole plant from scratch? No, Hufstetler tells me, you scan what’s changed and then pull that scan data in to the existing model as an update. This way, you get an accurate representation of the plant as it is currently operating without the long, tedious process of converting point clouds to CAD data or, worse, modeling manually.

When I talked to Torsten Beste, Director Strategic Solutions with Siemens PLM Software, he told me that using point clouds offers great benefits to the design process. With point clouds, you can “bring the as-built factory into [Siemens’] planning environment, where we have the configuration controls and we know how to configure all the different variants. With the as-built in there, you can validate the different variants in the context of the as-is factory.” Such a process of validation helps to avoid most if not all construction or production line interferences, which can be extremely costly and time consuming.

Using point clouds within Siemens’ Tecnomatix software makes it simpler, faster, and less expensive to try out different variations for a plant and arrive at the right one. 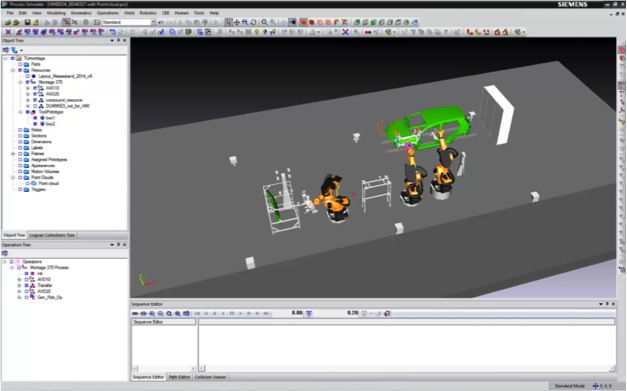 Hufstetler told me that this process saves weeks worth of man-hours, which in turn greatly reduces the time to market for new products. “There’s no value in me spending weeks and months and years changing over things. I want to digitally validate it so that when I start making my hard investments, I know they’re going to work.”

Throughout the conference, this integration was touted as a leading example of how builders, owners, and operators can benefit from what Bentley has called “reality modeling.” This term refers to the continuous capture of as-is conditions for the purposes of design and other decision-making. As Bentley fellow Faraz Ravi put it, “At Bentley we are gratified to be seeing what we call reality modeling yielding such benefits for product and production lifecycles. In industrial plants, occasional surveying can now become almost continuous immersive scanning. Project and asset performance are both improved through the information mobility of point clouds.”

There was no big reality modeling story at Bentley YII2017, and that’s a good thing