The Technology Committee, chaired by Josh DeStefano, and co-chaired by Kelly Cone have released the report which includes over 30 pages of reporting on data distribution in the Building Documentation industry.

This week, the U.S. Institute of Building Documentation (USIBD) has announced the release of their thirteenth Cornerstone Report, focused on Data Distribution.

USIBD is the first U.S. organization to focus solely on supporting the Building Documentation Industry within the United States, and is a co-located partner for Geo Week.

This year’s survey grew out of the last USIBD Symposium (hosted at SPAR 3D Conference + Expo in 2019), where many members asked how other AEC professionals are storing and distributing their reality-capture data.

With 149 respondents, this is one of USIBD's largest surveys yet. It’s also their first report on this topic. The responses were collected prior to the impact of the COVID-19 pandemic, so USIBD advises to keep this in mind when reviewing the report - as this worldwide event clearly caused dramatic impacts on the building and construction industry.

The Technology Committee, chaired by Josh DeStefano, and co-chaired by Kelly Cone have released the report which includes over 30 pages of reporting on data distribution in the Building Documentation industry. Inside, is an array of demographic data, as well as in-depth sections on AEC data retention and sharing strategies, cloud computing adoption, the real-world costs of different storage solutions, the biggest challenges of managing point-cloud data, and more.

Cost is no longer the biggest barrier

While there is not any historical data to draw from as this is USIBD's first survey on this topic, the data on the barriers to the adoption of laser scanning and reality capture show some interesting trends.

While cost is still a concern, this survey data seems to reveal a split between those who think cost is still a major concern vs. a minor problem to overcome. This could be due to the broadening of price ranges for various sensors, and the overall democratization of scanning that is coming from camera-based sensors or even lidar sensors on mobile devices.

But when it comes to the ease-of-use, the trend is a lot clearer. It is not nearly as complex of an undertaking to perform laser scans these days, and that'd reflected here. With most respondents calling the complexity and time required "insignificant" or "minor" problems - it is evident that reality capture manufacturers have been working hard to bring down that learning curve. 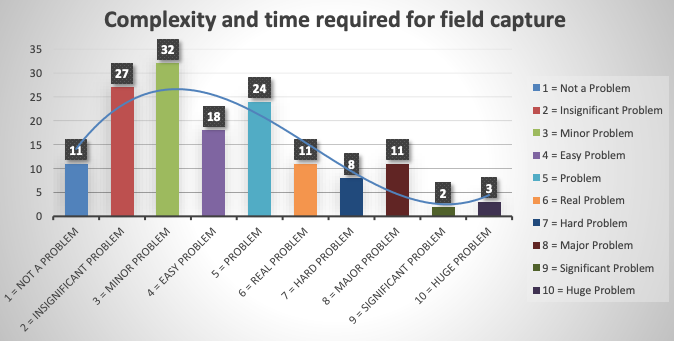 The strongest barrier, however, seems to be the complexity and time for generating deliverables from reality capture data. Scans are getting easier, but processing and distribution may be lagging behind. 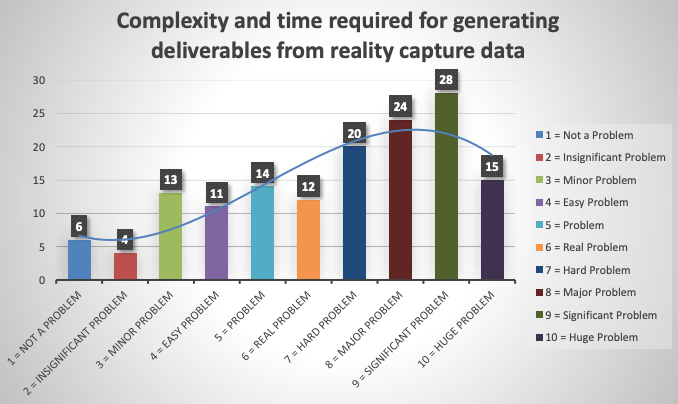 This disconnect between when the data is captured and how it can be used has not gone un-noticed, with companies like Kaarta focusing on how to get to actionable information more quickly, and Autodesk trying to make its products more focused on owners and other stakeholders.

The report authors mention that these responses are in line with what their members have been telling them anecdotally as well.

"Steady decreases in the cost of equipment over the last 10 years means equipment cost isn’t as big of a barrier as it used to be. Meanwhile, the technology development curve of each of the other barriers corresponds well with how long those technologies have been under constant development and improvement."

The report also goes into depth about the long-term storage of reality capture data, how easy (or not) it is to share and store, and other data-related considerations. You can read the full report on USIBD's website below:

USIBD Looks to the Future at Geo Week

USIBD Looks to the Future at Geo Week