3D design software maker Dassault Systèmes SA on Monday warned investors that 2013 sales growth will be significantly below expectations due to order delays, especially in Asia, and a customer shift towards rental licensing.

Based in Paris, France, Dassault reported preliminary third quarter revenue of €496 million (US$673 million), up 4 percent compared to the same period last year, but missing expectations by €24 million ($32.4 million).

Third quarter earnings per share are down 1 percent to €0.88 ($1.19), the company said. Operating margin for the quarter was 31.6 percent, slightly better than expected.

Dassault’s stock (OTC: DASTY) fell 10.5 percent in trading Monday, its largest intraday plunge since January 2009. The stock was down nearly another 5 percent on Tuesday to $112 per share. The company has a market value of €11.4 billion. Full third-quarter results will be announced Oct. 24.

“Despite a quarter that was on track until the very last days of the period, our preliminary financial results are below our revenue and earnings objectives and I want to apologize for that,” said Thibault de Tersant, Dassault CFO, in a conference call Monday. 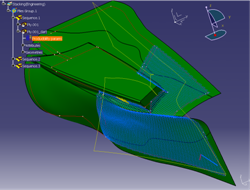 Dassault also said software revenue was up 8 percent in the quarter with strong renewal rates. However, it lost out on an estimated €8 million ($10.8 million) in new license revenue as more companies decided “late in the quarter” to choose rental licensing instead of upfront licenses.

Revenue from services was also lower than anticipated by €4 million ($5.4 million), the company said. Geographically, third quarter revenue rose 7 percent in Europe but just 2 percent in Asia and 1 percent in the Americas.

Tersant said Dassault is in the “midst of significant, important developments in research and development to deliver what we believe will be a sea-change with our 3DEXPERIENCE platform.”