The new BLK360, announced at HxGN LIVE, is far more than an incremental update, says Juergen Mayer, president of the Reality Capture Division

It is hard to argue that there was anything more disruptive to the reality capture and surveying industry than the original introduction of the original Leica BLK360. With their unusual form factor, almost unbelievable lightness and portability, and their ability to go places that were previously unthinkable, the launch in 2016 was one to be remembered. This week, at HxGN Live Global 2022, hosted in Las Vegas, Hexagon made another big announcement: The next-generation BLK360 is here - faster, smaller, more accurate and more capable than ever before.

The next generation BLK360 aims to ‘dramatically advance’ reality capture once again, like its predecessor (now referred to as the BLK360 G1). The new BLK360 has a 4-camera system captures high dynamic range (HDR) spherical images and provides a greater dynamic range for immersive photospheres and colorized point clouds. Four 13-megapixel cameras capture the scene in high quality, and 5-bracket HDR imaging captures the details in challenging lighting conditions and environments.

The new BLK360 is about four times faster than the BLK360 G1, though it can be anywhere between three and six times faster, depending on scan settings. Taking a complete spherical image and 3D point cloud with the BLK360 G1 takes a little over a minute, while the new BLK360 takes just 20 seconds.

Comparing the two sensors, both BLK360s have the same measurement accuracy at 20 meters – down to 8 mm – but the new BLK360 has 4 mm accuracy at a distance of 10 m, compared to 6 mm accuracy at the same distance for the BLK360 G1.

Perhaps even more groundbreaking than the speed is the integration of Leica Geosystems’ Visual Inertial System (VIS) to the BLK360. This ‘Visual SLAM’ uses features from imagery to help track the position of the sensor, so manual alignment isn’t needed, according to a Leica post. With its integration into the BLK360, this effectively means that each scan you capture is combined with your previous scan in the field, reducing time spent aligning data and freeing up more time to create valuable deliverables. 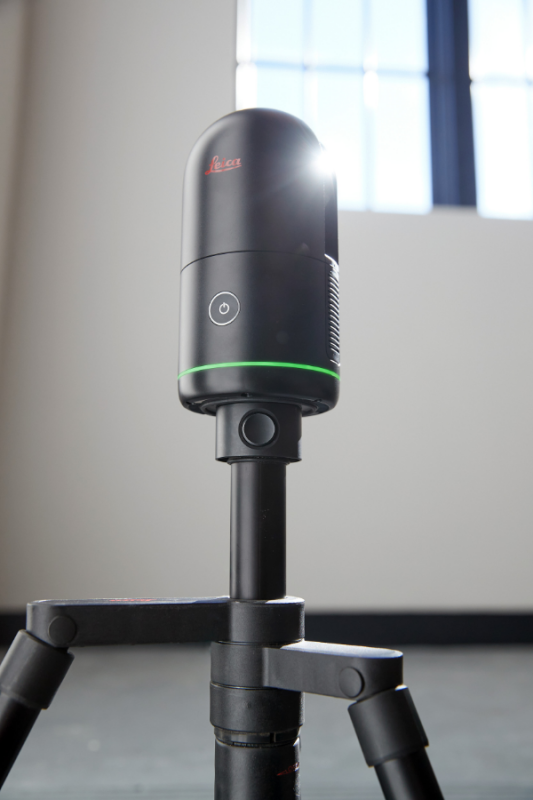 Another workflow improvement is the availability of both streaming the data over wifi and a USB-C connection, to drastically improve transfer speeds if and where they might be needed. In the original BLK360, the data was kept on the device for data storage, and the data could be accessed via apps. But now, the full data is actually transferred, so you can have your full dataset on your smartphone, for example. And additions/edits are synchronized automatically between devices.

The BLK360, like the BLK2GO, BLK2FLY, and BLK ARC, connects directly to HxDR, Hexagon’s cloud-based storage, visualization, and collaboration platform for reality capture and geospatial data.

Upload scans to HxDR for simple cloud storage, including any E57 file or directly from compatible Leica BLK scanners.

The new device is also noticeably (20%) smaller than the original, being not much larger in the hand than a large coffee cup. Weighing in at .75 kg (1.65 lbs), roughly the weight of a basketball, it is almost hard to fathom the amount of technology fit into such a tiny package.

For Juergen Mayer, president of the Reality Capture Division at Leica Geosystems, part of Hexagon, it means that the BLK360 journey has now come full circle - and the latest release gets to take advantage of today’s technology.

“It all goes back to the origins of the BLK story. It was really about creating something disruptive. And I believe that goal was widely achieved - by both a technological sense to come up with something that no one expected, and that people didn’t even think this was possible, but also in terms of the impact it had on the industry.”

From the outset, the company wanted to help to bring reality capture and 3D to broader audiences, aiming to lower the barriers to use. For Mayer, the next generation BLK360 is the next step towards this vision.

“When we introduced the original BLK360, we called it an imaging laser scanner to highlight the importance of the imaging aspect. And the new generation now is coming closer to the ambition of making it as simple to use as a camera. Everyone knows how a camera works, and what it does, and how easily we can take data off and use it elsewhere. It is getting close to this vision of making [reality capture] accessible to people who are used to cameras but maybe were hesitant to get into the world of 3D.”

The BLK360 is not the only piece of disruptive tech that has come over the years, with the BLK2GO being released in 2019 and last year’s release of the BLKARC and BLK2FLY, continuing their push towards autonomy and simplification of workflows, says Mayer. 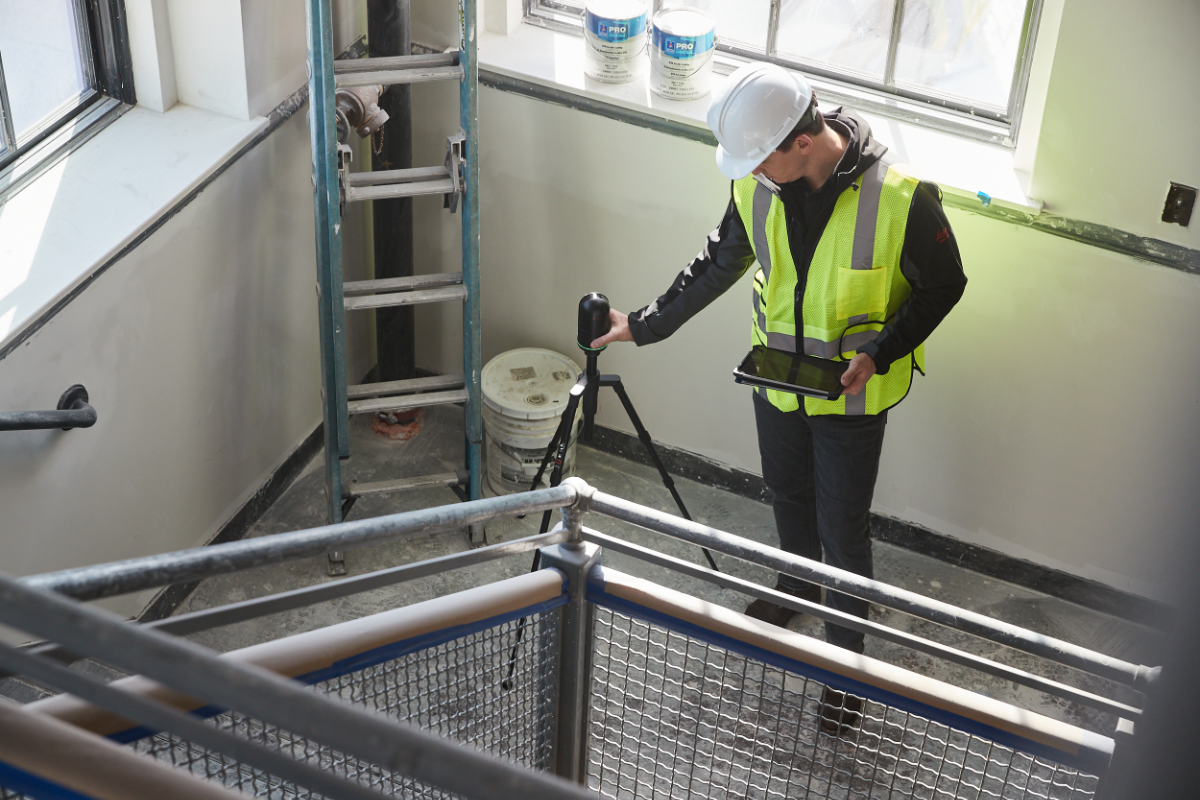 “And now in 2022, the BLK story essentially comes full circle, going back to our origins. What we really wanted to achieve here is not to come up with a “second generation” or incremental improvement. The idea was really to do the same thing again - to keep the original DNA of the BLK360. But, from a technological point of view, to be as disruptive as the first time.”

While it may be easy to wonder what trade-offs were needed to get to be able to perform a capture at such quick speeds (is the data quality decreased or the accuracy lower?) in the new BLK360 they’ve managed to improve the speed and accuracy and performance, together.

“At the same time [as we improved speeds], we also worked a lot on the data quality, achieving a 30% increase in 3D point accuracy - down to a 4mm 3D point accuracy. The completeness and cleanliness of the data - everything has been improved. Users will see more data on difficult surfaces for example.”

“We really challenged ourselves - we said, let’s see how much we can push the boundaries and come up with something completely new again,” says Mayer.

The BLK360 is now available for demonstration and purchase through BLK360.com. The BLK350 G1 is still available for sale and fully supported by Leica, so users can decide whether they should upgrade.