Obviously, not everyone could make it to Anaheim for SPAR3D. We get it. So, we thought we’d give you a little taste of what attendees heard from keynoter MiMi Aung on May 22, to open the conference. Do you think you could design a Mars helicopter to fly missions of exploration? Because that’s what Aung and her team at the Jet Propulsion Laboratory have done, using a lot of trial and error and 3D modeling and experimentation.

How hard was it? Well, Aung told a rapt audience, all they had to do was build a vessel less than 2kg, which can fly in atmosphere that’s almost entirely carbon dioxide and roughly 1 percent as dense as earth’s, and survive temperatures roughly 90 degrees below zero (celsius). No problem, right?

Unfortunately, it’s not that impressive looking. They only get two inches in the air for about a minute. My 12-year-old tells me he could do that with some legos. But just think about the conditions they had to create:

“The Martian atmosphere is only about one percent the density of Earth’s,” said Aung. “Our test flights could have similar atmospheric density here on Earth – if you put your airfield 100,000 feet (30,480 meters) up. So you can’t go somewhere and find that. You have to make it.”

Aung and her Mars Helicopter team did just that in JPL’s Space Simulator, a 25-foot-wide (7.62-meter-wide) vacuum chamber. First, the team created a vacuum that sucks out all the nitrogen, oxygen and other gases from the air inside the mammoth cylinder. In their place the team injected carbon dioxide, the chief ingredient of Mars’ atmosphere.

“Getting our helicopter into an extremely thin atmosphere is only part of the challenge,” said Teddy Tzanetos, test conductor for the Mars Helicopter at JPL. “To truly simulate flying on Mars we have to take away two-thirds of Earth’s gravity, because Mars’ gravity is that much weaker.”

The team accomplished this with a gravity offload system – a motorized lanyard attached to the top of the helicopter to provide an uninterrupted tug equivalent to two-thirds of Earth’s gravity.

In all, Aung said, they used 1,500 parts to create the helicopter, which somehow ended up weighing in at 1.8kg. Heck, there’s weight to spare! Throw a few cool stickers on that thing! 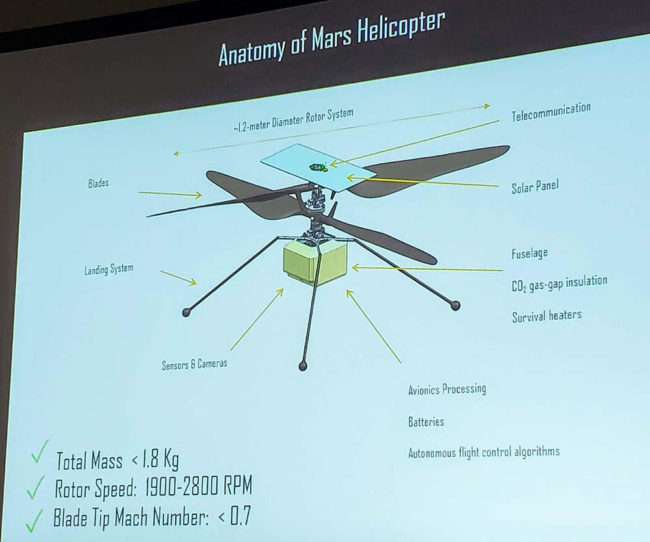 Once it gets to Mars in 2021 in the belly of the Mars Rover, Aung said it will drop to the ground and then begin flying on the red planet – hopefully. The Mars tests seem so elementary, and speak to the difficulty of the mission:

A month or two after the rover lands on the Red Planet, the chopper will drop down and hit the dirt itself. The little vehicle will then make a series of short flights, each of which will last about 90 seconds and reach a maximum altitude of 16.5 feet (5 meters) or so, Grip said.

These sorties will be made between 330 feet and 3,300 feet (100 to 1,000 m) away from the rover — far enough away to pose no collision danger, but close enough to be in communications range. (The helicopter will talk to its handlers on Earth via the rover.)

The blades spin at 2,400 revolutions per minute. Most drones here on earth do about 8,000-12,000 RPMs, but the blades wouldn’t move enough of the thin atmosphere to get it off the ground. Helicopters are more like 250 RPM, and it’s easy to see that this Mars helicopter is much more like a helicopter in terms of its blade-to-body ratio.

For now, the only payload will be a camera, which they’ll use as a proof of concept, detailing the way such a helicopter could be used to scout terrain ahead of time. How long until there’s a lidar unit on the bottom? I’m guessing not long. No doubt that would be incredibly helpful for modeling terrain and creating incredibly accurate visualizations of the planet. The lasers could probably also be used for some analysis of the composition of the rock.

Aung noted there’s little room for error on Mars, so the scouting portion of the helicopter’s mission is both incredibly important and kept relatively straightforward: 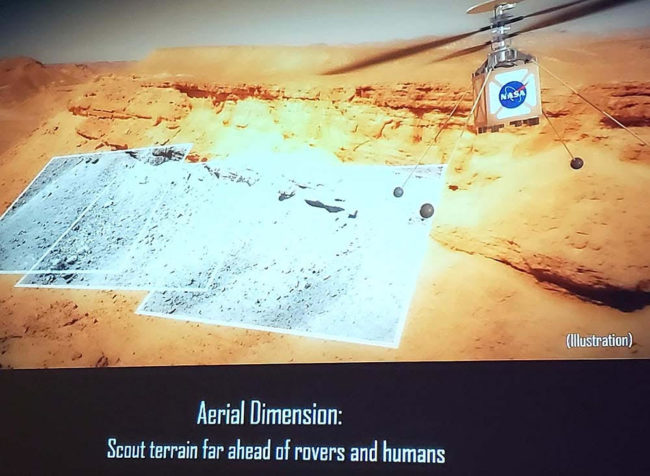 Clearly, a lot of testing and modeling went into this project. Luckily, there’s a great document for exploring all the details if you’re so inclined. Perhaps most relevant to SPAR folks is the “Helicopter Control Analysis Tool (HeliCAT). It was developed specifically for this purpose, using the Darts/Dshell multibody simulation framework developed at JPL. … [which provided for]detailed modeling of actuators and sensors, ground contact dynamics, ground support equipment, flight software integration and 3D visualization. The simulations were used to generate and verify key mechanical design requirements such as rotor stiffness, perform system identification of vehicle dynamics to develop control algorithms, test embedded flight-software, and rehearse all test efforts.”

How fun would that be to play with? Just imagine the processing power needed for all of that. In the end, you get a simulation of a Mars helicopter hovering inside the Victoria crater, which never gets closer than about 34 million miles away: 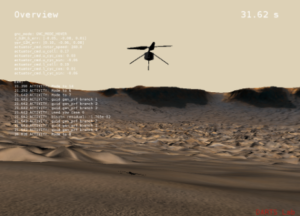 I can only imagine the thrill Aung and her team will feel when that model becomes reality in 2021. Having it work in a test facility in California is one thing. Getting that first confirmation of flight on Mars? That’s going to be something special.