Geospatial hardware and software provider GeoCue recently announced True View, a new line of drone sensors. The first sensor of this product line will be the True View 410, a mapping camera configuration for commercial drone platforms that enables surveyors to produce 3D colorized point clouds, oblique imagery and orthophotos with a single flight. It is also the industry’s first integrated lidar/camera fusion platform in a payload package that weighs less than 2 kg.

This new line of drone sensors is a logical extension of GeoCue’s UAS division that was established in 2014 and includes products and services for geospatial data extraction using low-cost drones. The launch of the True View 410 follows the integration of the new DJI Phantom 4 Pro RTK into GeoCue’s AirGon Sensor Processing Suite from last December. GeoCue presented the True View 410 last June during an invitation only industry event in Nashville, Tennessee, together with a beta program starting that same month.

The system is more than just a lidar and dual oblique mapping configuration: the full system also includes processing software as well as licensing model that includes a subscription service.

The True View 410 system consists of the following components: 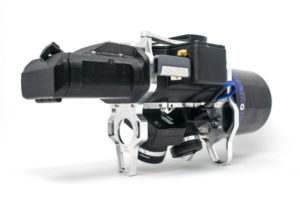 While more technology providers are starting to offer drone-based lidar solutions, GeoCue is the first to offer a lidar/imagery fusion sensor. First of all, the data product of the True View 410 is a 3D colorized point cloud, instead of lidar data with a rough grey scale intensity. GeoCue expects that with this release 3D colorized point clouds will become a standard product demanded by customers of high accuracy mapping, as it provides both the richness of true color imagery and the high accuracy of lidar data. As such, True View adds a new level of intelligence in lidar point clouds, resulting in 3D color mapping and vegetation penetration.

Typically, the combination of lidar and aerial imagery data results in a contextual orphophoto mosaic. GeoCue’s True View 410 system takes a different approach by creating a lidar point cloud where each point is colorized directly from the camera, producing geometrical and colored features. This point colorization process used in the Evo software happens through a technique called ray tracing, a rendering technique that can produce incredibly realistic lighting effects. It is used extensively for developing computer graphics imagery for films and TV shows and plays a role in improving sensor fusion for remote sensing specialists.