Time-of-Flight (ToF) cameras have burst into the smartphone market as manufacturers see the potential for consumer and business applications of 3D scanning.

What is a Time-of-Flight (ToF) camera and how does it work?

A Time-of-Flight (ToF) camera is a depth sensor that uses infrared rays to estimate the distance to objects in its field of new. This is comparable to the process used to create 3D images with laser scanners, but the measurements are taken with infrared wavelengths. The name “time-of-flight” refers to the time an infrared ray takes to be sent and returned to the sensor after hitting an object. Because the speed of light is constant, the device can make a calculation of how far away one object is based on that timing of the return beam. While the technology behind ToF cameras in itself is not new, smartphone manufacturers have started adding it to their products only recently, capitalizing on its potential add significant functionality with minimal cost or processing power.

What are ToF cameras used for on a smartphone?

ToF cameras and sensors can be used for various applications. The first ToF cameras were found in the back of the LG G8 smartphone, (the part where the screen is located). This positioning enabled the sensor to be used for facial recognition to unlock the screen. This required only one camera, as opposed to the iPhone X that uses multiple cameras for its FaceID face recognition technology.

A front-facing ToF camera can enable more control over how the subject of a picture is displayed. With ToF sensors, it is now possible to separate a subject from its surroundings using the depth measurements to separate them. With accompanying software, this means that the background or foreground can be selectively blurred or focused, and an artistic “bokeh” effect can be applied where the background is blurred entirely. The captured images can also be transformed into 3D photographs that are displayed so that the background moves more slowly behind the foreground, creating a parallax effect. 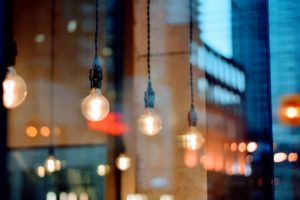 An example of the bokeh effect that can be applied using 3D ToF cameras.

Apart from photography, ToF cameras can be used for multiple (business) applications. Samsung for example enables you to combine the ToF camera from its Galaxy S10 5G smartphone with their Quick Measure app to accurately measure dimensions of indoor spaces. Samsung also sees great use for ToF cameras for augmented reality (AR), in combination with 5G and the cloud. One example is hospitality, where a digital overlay can enhance the customer’s experience, or by providing additional information when entering a showroom or gallery. Other applications are manufacturing (to diagnose issues and make repairs) and building 3D models (volumetric videos).

What smartphones include a ToF camera?

Multiple smartphone manufacturers have already released devices with one or multiple ToF cameras. Others are planning to do so in the near future, especially with the promise of connections to AR and VR applications.

While Google released a 3D scanning smartphone as part of Project Tango as early as 2015, it never really made it to mainstream, and did not seem to be carried through the rest of Google’s smartphone projects. Today there are several Android smartphones that come with a ToF camera, such as the LG G8 ThinQ, Honor View 20 and Oppo RX17 Pro.

As mentioned above, the Samsung Galaxy S10 5G comes with ToF cameras in the front and the back of the smartphone. They released the S10 5G last June in the US and the UK. Samsung also recently revealed its new Galaxy Note 10+ line, that will also include a ToF camera. In a demonstration during the launch event, Samsung demonstrated a 3D scanning application that allows for quick capture of 3D objects (within a certain size range) using the ToF camera that could then be sent to 3D printers, animated or imported into other VR/AR applications.

Surprisingly, Apple has not released a smartphone with a similar ToF camera yet. Although a brand new iPhone will be released in a few weeks’ time, insiders claim it won’t have a 3D camera. The first iPhone with a 3D camera is expected in 2020. However, it is possible that Apple will include a 3D camera in its next iPad Pro tablet, scheduled for March next year. At this point, nothing is certain about these releases, but the ToF sensors have become part of the buzz about which phones have it and which do not.