Test Driving the SurphSLAM (with Video)

In a totally unexpected partnership, Surphaser and GeoSLAM combined their tech to create a new, simple mobile mapping system utilizing the GeoSLAM/CSIRO algorithms and the new Surphaser 10. The cart-mounted package is simply called SurphSLAM.

Let’s start with the new Surphaser scanner—a new terrestrial scanner that was developed with the GeoSLAM algorithm in mind.  It boasts the superior scan quality that is common to Surphaser but in a much smaller package with the HQ version topping out at 50 meters and the HS version at 110 meters.  It also has a mems IMU contained in its base and two 5MP color cameras mounted adjacent to the laser optics for an integrated color capture solution.

My favorite enhancement is the smaller size and lighter weight making transporting the unit less of a burden. I can’t remember the last time a terrestrial scanner was miniaturized, but it is an important factor that is too often overlooked. 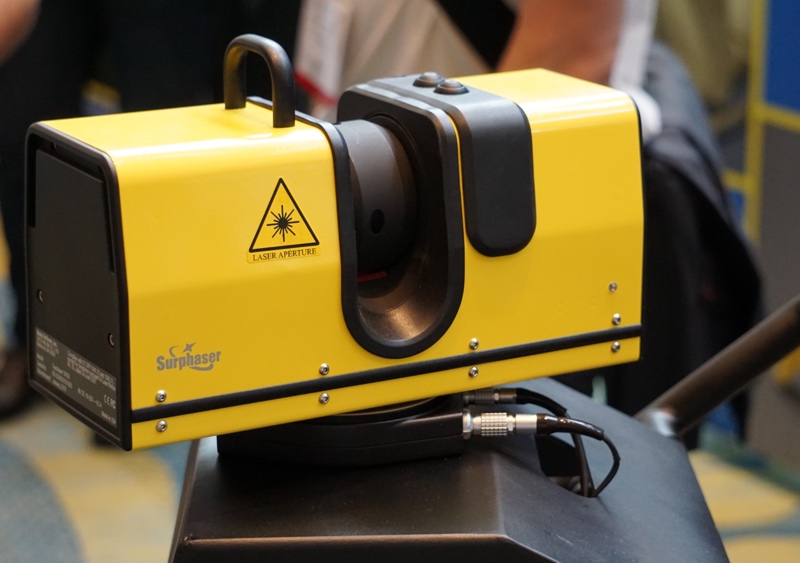 So how does GeoSLAM fit into this equation?

When attending the IAFSM conference last year, I had the pleasure of meeting a couple of the GeoSLAM reps and trying out the new GeoSLAM ZEB-REVO for myself.  I will not go into detail about that unit here, but to say that I was impressed is an understatement.  Having used “hand-scanners” in the past, I was astonished by the robustness and ease of use during the scan.  They have now taken that simplicity and reliability and transferred it to the collaborative effort with Surphaser to create this small scale mobile mapping unit.

The SurphSLAM is beautifully straightforward.  It is comprised of the Surphaser 10, a three-wheeled collapsible cart, a small computer mounted in the base of the cart with batteries, and a tablet for display, and control at the top of the cart.  I did take it for a test run myself, but I asked one of the gents working the booth to demonstrate first.

He slowly progressed at first, and I soon realized he was only moving slowly to capture more density and not because the system required it to function.  He practically ran through the door to the exhibition hall without skipping a beat in the continuity of the scan!  I was so shocked I stopped him to ask if he had messed up, but he just grinned and said “no problem.”

One of the unique differences in this mobile mapping unit is the fact that both the mirror and the head of the unit spin while progressing forward.  This is uncommon when using a scanner designed primarily for terrestrial spherical scans.  This allows the unit to capture more of a moving spherical scan rather than a helical scan which appears to produce a more homogenous dataset with fewer of the vertical aberrations I have seen from helical scans. The Surphaser 10 is mounted at a forward angle during normal mapping mode, but it has the ability to tilt the scanner up and capture a static spherical scan for key areas.  One of the most impressive components of the system is how you can see a preview of the point cloud being created live with the ability to zoom in and rotate on the tablet, but the final data quality is very close to what we are accustomed to with normal terrestrial scans. 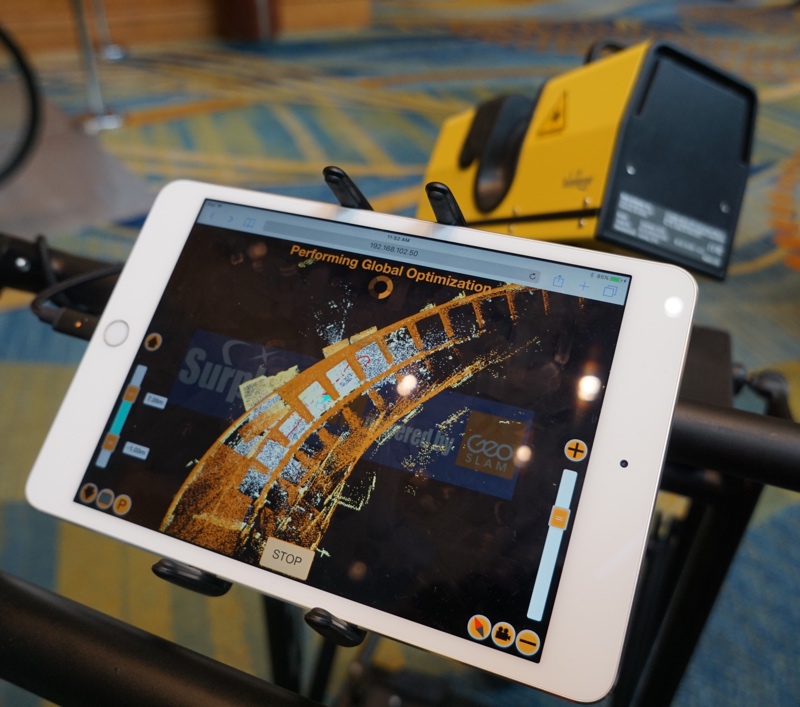 I have been looking forward to the emergence of more small scale mobile mapping systems that reduces the hardware/software complexity lessening the difficulty for entry.  This unit certainly satisfies that desire.  This product is a great example of the positive results that can be produced from a collaborative approach.