Takeaways from RIEGL LiDAR 2015 in China

With users, RIEGL staff, and press arriving in Guangzhou, RIEGL began the second portion of its international user conference. This portion of LiDAR 2015 was well attended and the keynotes were packed. Here are a few quick takeaways and some more in-depth thoughts on RIEGL’s Chinese debut.

RIEGL is sold on data analytics

The company is generally known for the high quality of their hardware, and the precision of the data that their hardware gathers. But the conference showed that they’re interested in some pretty innovative ways for squeezing more value out of that data, too. Take SKUR’s solution, which RIEGL supported as a development partner and helped to debut at the conference. It uses machine learning to analyze data and track change at construction sites–essentially it crunches huge amounts of LiDAR data and tells you only the actionable information you need to know.

You can probably see a pattern emerging.

As evidenced by their new hardware solutions, RIEGL is focusing on making scanners that fill very specific project needs within the industries they cover. Sometimes it seemed that they had a specific scanner for any purpose–including capturing caves or snow-covered mountaintops. In speaking with Dr. Riegl, I learned that they have even manufactured custom hardware for a user that needed to scan at temperatures above 1600 degrees.

Judging by the user conference, this strategy has made RIEGL quite popular with not only individual users, but quite a few universities and other large institutions. These are good friends to have.

Many of the presentations on the first morning were identical to those given in Hong Kong, but others showed one notable difference: they are part of RIEGL’s introduction to the Chinese business community.

Nikolaus Studnicka, the managing director of RIEGL China, described the history of the company in China. RIEGL’s presence in this fast-growing market began with the introduction of the VZ-400 through distribution partners Five Star Electronics and Red China Geosystems. Other firsts included a scan of Tianmen square and the People’s Hero Mounument in Beijing. Since achieving a business license in the country, RIEGL opened a Beijing office in 2014 with plans for further expansion in the future.

Many of the following presentations stressed the importance of China to RIEGL. Dr. Yanjing Liu of Five Star explained RIEGL’s expertise in the 3D arena and explored the company’s values. He said that RIEGL’s customers and peers are seen as their friends, and that RIEGL holds a great deal of respect for their competitors.

He also presented a fascinating history of LiDAR in China, a country that didn’t have a name for the technology until 2001. The technology wasn’t widely used then, but has seen dizzying growth in the past decade or so. It’s very impressive–despite a difficult start, numerous companies within China are already producing end products “up to U.S. standards.” 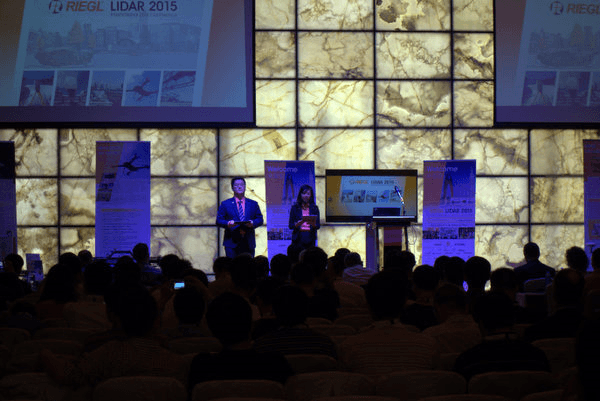 As befits a company founded by an academic, much of the morning’s presentations were given by professors and PhDs. This was a great help in establishing RIEGL’s credentials in China.

The last presentation of the morning was given by Dr. Jun Li, who explored the ins and outs of his academic experience using RIEGL’s mobile mapping system. The point cloud, he told the audience, has allowed for great improvement of their mobile mapping work for cataloging roads, signs, and other transportation infrastructure. He also explored a few case studies and offered details on his business processes to an audience perhaps unfamiliar with mobile mapping.

Given the density of China’s urban populations, as well as the immense size of its infrastructure, it’s easy to see why RIEGL would highlight this presentation as a keynote rather than relegate it to a conference session.

Much of the morning had the flavor of a coming out party for RIEGL in a 3D-measurement market that is maturing quite quickly. As many presenters stressed, China is clearly important to RIEGL, who expended quite a bit of logistical effort to hold a conference in mainland China. They obviously see that the market is ready to explode, and it’s safe to bet they’re not alone in the 3D imaging and geospatial industries. A language barrier won’t be enough to keep us away.