A few weeks ago a team from TestFit.io attended the co-located SPAR 3D/AEC Next conference, where they became aware of a huge problem: scanning teams can’t determine the optimal placement of capture devices when gathering 360° photospheres or point clouds.

As luck would have it, TestFit.io was about to participate in an AEC hackathon where they would develop a solution. Called Scan Point, this quick and dirty solution “spatially optimize[s]the setup location of 3D laser scanners across a floor plan to achieve level point density, and minimize photosphere locations.” 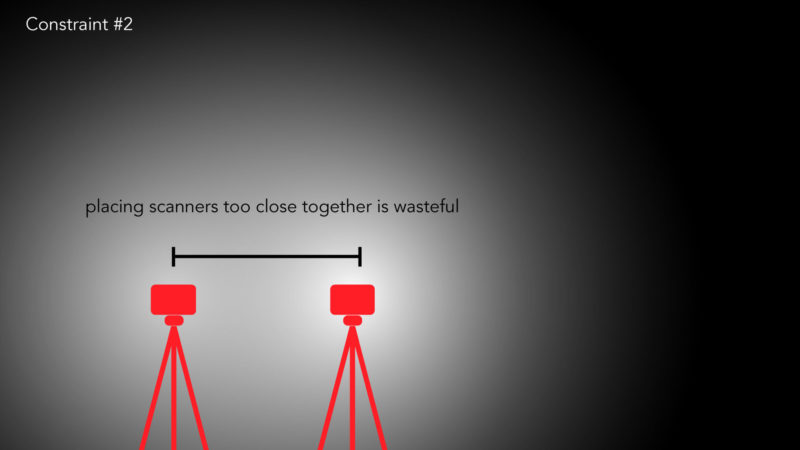 When I caught up with TestFit.io CEO Clifton Harness, he explained that they think the capture placement problem is “pretty bad for a number of reasons.”

First, when you’re scanning a site continually for months and even years, the amount of duplicate data can become huge—and a huge strain on project resources.

“Secondly,” he says, “if the site is an existing secure or mission-critical facility, surveyors might only have an hour to collect all of the data that they can. Another interesting point that one of our teammates, Chris Cambero of Whiting-Turner, noted was that jobsite interruptions are a real problem. In order to do a scan, they need to clear the entire area being scanned, or just accept the fact that a worker or other digital relics could exist in the point cloud.”

Harness reminded me that the program is a hackathon project with “about 36 hours of real development time put into it so far,” so I shouldn’t expect a full-featured solution just yet. After that, he explained Scan Point solves the problem with a minimum amount of compute resources by keeping humans in the loop. It allows you to see overlapping fields of point clouds, and do a “small amount of simulation” in the pursuit of improving your placement.

The workflow is simple. “Users can load up a PDF and draw where the walls are. Users can specify how dense their point-cloud needs to be (points per mm) and what the effective spread for their scanner is at 30 meters. They then turn on the simulation mode and place spheres. Scan Point will tell users what their coverage is, and will keep track of the best result. Users can then export their result back to PDF.”

Can you test it?

Harness says that, “if there is a sincere interest in actually building this into a product, we will do it, we will automate it, and help everyone save time. If this was just a fun one-off hackathon project, we are fine with that as well.”

If you’re interested in trying it out, or making sure that Harness and his team build this out into a fully automated solution, hit up TestFit.io through the Scan Point landing page here

A collaborative solution for shutdown and turnaround projects

A collaborative solution for shutdown and turnaround projects