Is Construction (Finally) Ready to Move into the Digital Age?

In 2016, the construction industry was rocked by a now-infamous McKinsey report that indicated, among other things, that large projects typically take 20 percent longer to finish than originally scheduled, while also finishing up to 80 percent over budget. Clearly that lack of efficiency is untenable, and the industry has been searching for answers ever since. The point of the report, titled Imagining Construction’s Digital Future, is centered around technological development, something that has seemingly been slow to develop in this industry despite the very clear issues that need fixing.

In a recent webinar - Is Construction (Finally) Ready to Move into the Digital Age? - we gathered a panel of industry experts to discuss this very issue.

In a discussion led by Carla Lauter, four industry visionaries came together to share their perspectives: 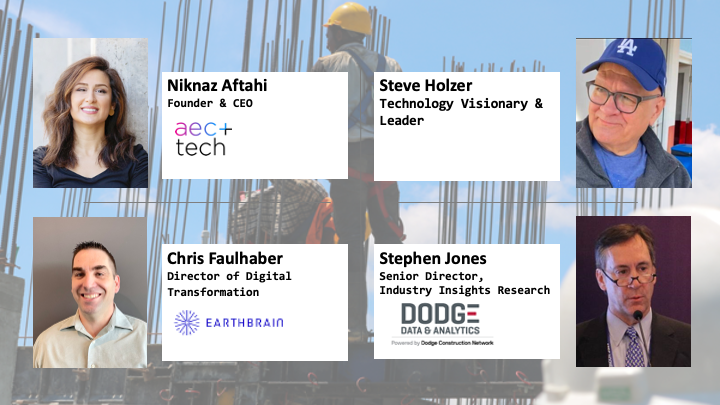 In the informative discussion on the state of digital adoption in the construction industry, there was no shortage of insightful observations and important tips for those ready to make the leap. Below are a few highlights from the conversation.

AEC is still too siloed

One of the big takeaways in trying to identify the problem leading to this lack of digital adoption in the industry is that the industry is simply too siloed and too hesitant to share ideas and successes across disciplines. This may stem from self-preservation and competition; a company that has found something that works to increase efficiency is too often not willing to share that with others.

The reality is there are enough projects to go around – the industry was worth over $1.3 trillion at the end of 2020 in the US alone – and sharing these ideas only serves to help everyone create more effective workflows. On this topic, Aftahi notes that at aec+tech, their main challenge has been inviting AEC firms who are using these latest technologies to share with us what tools have been working, or haven’t been. She points out the competition and secrecy that is inherent to the industry as the major barrier to getting this type of information.

It’s not just the secrecy that is keeping things siloed, though. Perhaps an even bigger issue is that, since we are still in the early stages of this tech adoption, there are simply too many options out there serving very specific needs. As Jones put it early in the conversation, it’s “very easy to build mediocre technology, and there’s a ton of it out there, and it tends to be point solutions because we’re highly fragmented.”

The companies developing AEC software are targeting very specific needs for the customer they’re attempting to serve, resulting in what can be seen as one-off solutions.  When these bespoke solutions become part of a workflow, firms can become hesitant to adopt something new, even if it is broader and more useful to their work.

Digitalization is coming, but the speed at which it gets here is going to come down to, in large part, the ability for this industry to become more cohesive and less of a fragmented, siloed sector.

On the subject of fragmentation and siloes, the panel identified a lot of problems that are leading to this relatively slow adoption of new digital workflows, but of course we are more interested in solutions than simply identifying issues. Among the biggest takeaways from this discussion was how key the idea of visualization is, especially without having to actually be on-site, for companies to buy into this technology. Jones mentions in this discussion that there is a thread from the early days of BIM around visualization, noting that “humans are a visual species.”

Faulhaber also spoke about this concept of visualization, and specifically for remote workers. He notes, specifically talking about utilizing drone data, that he sees companies starting to buy in once they have that visualized data incorporated into their workflow. He says that once companies have the ability to collaborate without having to spend the entire day on a job site, and with a visual aid produced by this drone data, that customers say, “I don’t really know how I did this without it.”

There has to be some sort of hook in getting a lot of these companies to adopt this technology, and the visual aides seem to be the best way to get people on board. It’s hard to argue with the idea that you don’t have to spend 14 hours at a job site in extreme heat, and things like BIM and digital twins allow people to avoid that. Jones’ point here that humans are inherently visual beings is an important one, and something that those trying to implement this technology in the AEC industry would be wise to remember.

The digital future is inevitable

We are in a fascinating place in the AEC industry with the implementation of this technology being a bit fragmented, but one of the overarching conclusions of this discussion was that eventually this is going to be commonplace, and as Jones notes future generations will be amazed by the way we are doing things now. There was some disparity about how close we are to that future – most seemed optimistic it could be here within the next decade, though Jones believes we’re on more of a 30-year track to really be in a place where this digital future is ubiquitous.

The panelists were also careful to make clear that this technology is not going to replace workers. Rather, as Aftahi notes, “that our role as an architect, a contractor, an engineer, is changing, and we have to be open to it because it is happening anyways.”

While we are still in a place where the fragmentation and concerns about trade secrets are slowing widescale digital adoption, it’s hard not to be optimistic about the future after listening to this full discussion.

Fill out the form below to watch the webinar recording!

Thank you for registering for the on-demand webinar: Is Construction (Finally) Ready to Move into the Digital Age?

A confirmation email will be sent shortly with access to the on-demand materials.