How the payload-agnostic systems can be used for data collection by professionals in the surveying, construction, and infrastructure industries.

This article is sponsored by WISPR Systems.

It’s safe to say that in industries like surveying and mapping, construction, and infrastructure inspection, the use of drone technology is well on its way to being mainstream, if it’s not already there. In fact, the surveying and mapping industry was among the first to really embrace these tools. For most companies and professionals who have tried implementing these drones into their workflows, the value is almost immediately apparent. That said, there are still some barriers that companies and professionals encounter, which is to be expected with any relatively new tool. Here, one of the things that can be difficult to find is a solution that encompasses all end-to-end needs with an intuitive workflow. That’s where WISPR Systems comes in.

WISPR Systems was first established by Conor Ferguson and Austin Ratcliffe in 2017 after the two finished their time at Mississippi State’s Bagley College of Engineering. There, one of Ferguson’s professors was working on a doctorate and was doing a dissertation around capturing data via drones, but didn’t have the budget to purchase everything needed to complete the project. Ferguson offered to help by building some, and quickly others around campus started asking for his help as well. Ultimately, that turned into the development of WISPR Systems.

One of the ways in which WISPR separates themselves from the competition among drone providers, and particularly those working in the industries mentioned at the top, is through the fact that they provide that end-to-end solution, developing not only the hardware but also the software to plan missions. After the mission is completed, the company offers support and services on third-party platforms throughout the data processing stage, ensuring things continue to run smoothly through the point of producing the end deliverable.

As far as that hardware piece of it goes, the flagship product offered by the Mississippi-based company is their Ranger Pro 1100 drone, a rugged UAV built to work in the kind of conditions often seen on worksites and remote surveying locations. With built-in obstacle avoidance, low vibration, the ability to be compacted for easy transport, and the ability to to manage up to six pounds in payload in high-wind conditions, the Ranger Pro is designed specifically with many of these hard, industrial fields in mind.

One of those fields, as mentioned above, is surveying, for whom there are plenty of specific benefits provided by the WISPR team. Some of that has already been mentioned above, including the versatility to support any type of camera (under six pounds) for photogrammetry as well as any lidar sensor (again, under six pounds.) On top of that, WISPR has made strides around its battery management which can benefit longer jobs in particular. Specifically, the WISPR drones are built with battery hot-swap capabilities, meaning that batteries can be swapped in and out without having to power down the drone. This is a considerable time saver, particularly for longer projects that cannot be completed within one lifecycle for a battery.

The in-house software also provides the simplest mission planning solution on the market, with the ability to plan a fully automated mission within only four minutes. The software also includes terrain follow, which allows surveyors to comfortably fly in some harder-to-reach locations without worrying about collisions with mountains or hills, as well as simple sensor calibration functions. Rather than the typical process of needing to manually map or fly a figure eight to calibrate either a lidar sensor or high-resolution camera, WISPR’s software includes a single-click option to automatically set up that calibration before automatically starting the mission once that calibration is complete. And finally, back to the batteries, the software also includes a battery monitoring system which tracks voltage, current, and capacity to provide an accurate flight time estimate as well as the ability to detect any potential issues with a battery as early as possible.

All of these features make WISPR a viable option for nearly any surveying project, whether it be in a remote location with harsh weather conditions or rugged terrain, or a particularly large space that will require multiple battery changes. WISPR can also work with marine surveys, having recently added bathymetry hardware into their arsenal. Working with SPH Engineering, WISPR offers the dual-frequency EchoSounder and its accompanying software. For surveys that include things like retention ponds or streams or rivers along a landscape, WISPR offers the solutions for the entire project.

It’s not just surveyors who reap the benefits of the company’s offerings, though. Construction companies are another group who have, more recently than surveyors, adopted drones for a variety of use cases throughout a job site. WISPR’s solutions offer plenty of benefits for these professionals as well, for many of the same reasons. The ruggedness of the Ranger Pro Series, and its ability to work through dusty and high-wind environments make it a perfect solution for a construction site. Additionally, the drones are built to equip multiple sensors – whether it be a thermal sensor, a high-resolution camera, a lidar sensor – with easy ability to manage them via a hand controller or whatever else one may want to utilize. This allows for simple monitoring of projects, stockpile volumes, and even inventory over a large space.

That brings us to one more crucial feature of the WISPR drones, its airplane-grade shielding to protect hardware from electromagnetic interference. This is particularly useful for surveyors or other professionals tasked with inspecting and monitoring infrastructure, especially powerlines. With this shielding in place, the Ranger Pro Series drones can fly closer to some pieces of infrastructure than other drones on the market, providing better and more valuable data from those inspections than would otherwise be possible. 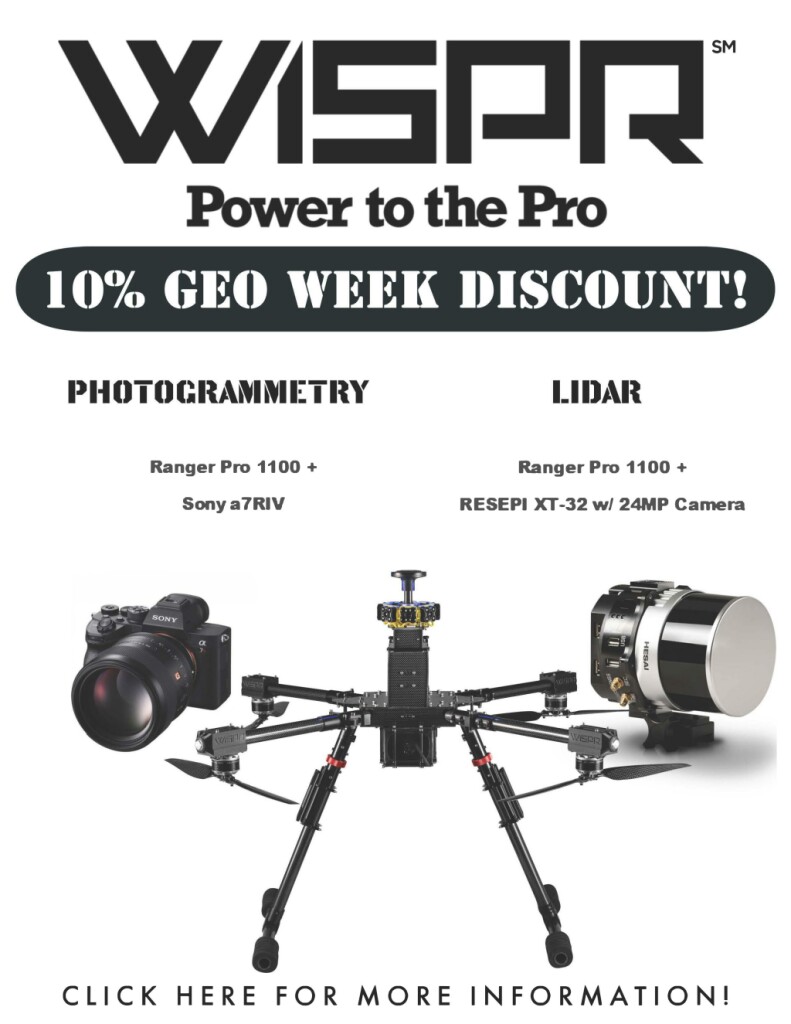