RIEGL has long been known for the quality of its lidar technology. One thing that often goes unnoticed, however, is the company’s unusual dedication to offering a wide range of systems—some that offer a great deal of flexibility across applications, some that meet the requirements of very specific applications, and a number of systems that fall somewhere in the middle.

Keeping to that strategy, the company has released an impressive number of scanners over the past handful of years, many of which will be on display in the RIEGL booth at the International LiDAR Mapping Forum in Denver this week. The company’s display will feature its latest generation of aerial lidar solutions alongside an array of other hardware and software, all with the latest technological developments for survey-grade 3D capture.

Here’s a quick overview of what you can expect to see at RIEGL’s booth.

The VQ-880-G II is an update of RIEGL’s system for laser scanning underwater features. It features a narrow, visible green laser emitted from a powerful pulsed source that enables high-accuracy measurement several meters through the water column, depending on clarity.

The VQ-880-G II also features a design that makes it simple for users to install the system—alongside a RIEGL data recorder—on a variety of platforms. That also means a new form factor, enabling more flexibility in configuration: It comes with a factory integrated high-end GNSS/IMU system, and users can deploy up to two cameras as needs dictate.

This system is a two-channel, waveform-processing lidar scanner for airborne capture. Notably, it offers the option to capture data at a variety of point densities. Depending on the application, users can capture from 2 points per square meter up to 60 points per square meter—making it ideal for use in ultra-wide areas and dense urban centers alike.

Adding to the appeal, RIEGL says the VQ-1560i offers improved suppression of atmospheric clutter, multiple-target detection, and proprietary Multiple-Time-Around processing that can handle up to 20 pulses in the air simultaneously. Users can exploit online waveform processing as well as full waveform recording and smart waveform recording enabling flexibility for feature assessment and attribute analysis.

The VQ-480 II is designed to be RIEGL’s primary offering for airborne surveying projects, and an update to the VQ-480 scanner with a high data rate of 2MHz. This latest generation still boasts RIEGL’s tested Waveform-lidar technology, but in a new user-friendly design. The VQ-480 II offers flexible storage options, an-all in one integrated housing, and a reduced weight of just over 10kg. That means you can easily mount the scanner on both manned and unmanned aircraft without having to worry about complicated wiring.

VUX-240: for corridor scanning with a UAV

This scanner is lighter yet, weighing in at only 3.8kg without INS, and it is specifically tuned for UAV corridor capture. It boasts a FoV of 75°, a fast data acquisition rate of up to 1.8MHz, and the company’s Waveform-lidar technology, which enables it to perform echo digitization as well as online waveform processing. The scanner also includes internal storage of 1TB and boasts a lightweight design, meaning that the VUX-240 is well suited for BVLOS operation.

miniVUX-1DL: for lightweight corridor scanning with a UAV

The miniVUX-1DL, as the name would indicate, is among RIEGL’s most diminutive laser-scanning solutions. Though it is even smaller and more lightweight than the VUX-240, it still offers users access to RIEGL’s Waveform-lidar technology.

Like its bigger sibling, this device has been specified to meet the needs of corridor mapping: It looks down, features a 46° FoV, and scans in a circular pattern that offers high point density as well as coverage in front of and behind the UAV. These features make it well suited for corridor mapping tasks like power- and pipeline surveillance, and highway or rail monitoring.

The miniVUX-1UAV is a miniaturized version of the VUX-1UAV. It offers a lightweight option for a variety of applications, and its laser wavelength is well suited for mapping icy and snowy corridors with a UAV.

Integration Kit 600: for adding flexibility to your UAV platform 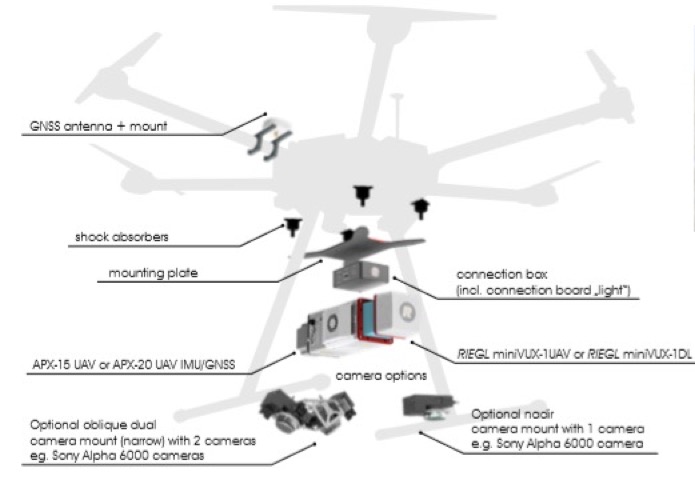 This kit is designed specifically for the miniVUX-SYS, which greatly increases their flexibility. The kit comes with a shock-absorbing mounting kit, a power-supply module, and cabling for easy integration into any multi-rotor lidar capable of carrying the miniVUX-SYS payload.

The miniVUX-SYS system configuration offers users the opportunity to choose different INS units and RGB cameras to include alongside the miniVUX lidar sensor.

Back on the ground, RIEGL’s VMX-2HA is built for mobile survey applications, and it boasts scan rates high enough to capture dense, accurate data at highway speeds. It is also a turnkey solution with two lidar sensors, an IMU/GNSS unit, and support for up to nine cameras to gather geo-referenced images as a complement to your lidar data.

This terrestrial system offers simultaneous capture of 3D data and imagery. It includes two processors, which gives users the ability to register data before scanning is complete. It includes a simple touchscreen-based user interface and a single-touch scan operation for improved ease of use.

The system is specified to be very flexible. It allows users scan in a number of different orientations and in a wide variety of environments. It also offers multi-target capability for high penetration of foliage and other obstacles, as well as filters for cleaning data captured in “less than ideal” conditions.

RIEGL also has a number of next-gen systems that will not be on display at ILMF.

This scanner offers a sophisticated new design that reduces weight and enables easier integration into stabilized platforms like gyro mounts and small hatches. RIEGL notes that its form factor makes the scanner a good match for use in manned aircraft like helicopters, small fixed-wing aircraft, or ultra-light planes. The company also says the system uses a laser wavelength that makes it ideal for use in icy and snowy conditions.

The VQ-840-G is a more compact topo-bathymetric system. It comes with an integrated and factory-calibrated GNSS/IMU system, and users can add an optional camera or infrared rangefinder as needed.

It is designed to be lightweight and compact enough for users to mount it on a UAV and a variety of other platforms. Depending on water clarity, the system’s green laser can penetrate water to enable measurement of submerged targets.

Keeping with RIEGL’s dedication to designing systems for specific applications, the VMX-RAIL is a fully integrated scanning system specified for the needs of rail capture. It features three lidar scanners for extremely efficient capture of dense, accurate, and feature-rich data. It can be deployed at speeds of up to 130 km/h (or nearly 81 mph), making it possible to use the system during regular rail schedules and without disruption. These features make it ideal for use in challenging environments for reliable capture of railway infrastructure, topology, and vegetation.

To learn more about any of RIEGL’s systems, stop by ILMF booth 311.

Ready to discover the latest advances and applications of topobathymetric lidar?

Ready to discover the latest advances and applications of topobathymetric lidar?