In December 2019, the municipal government of Kalmar, Sweden, embarked on an EU-funded StreamSam initiative to digitize its community development process. The StreamSam project is creating a 3D digital model of historic Kalmar municipality and the surrounding environment from point cloud data of buildings and terrain. Having access to this resource is expected to improve the development planning and public engagement processes. In Kalmar, the StreamSam project commenced with the digitization of the region’s best-known landmark: Kalmar Castle. 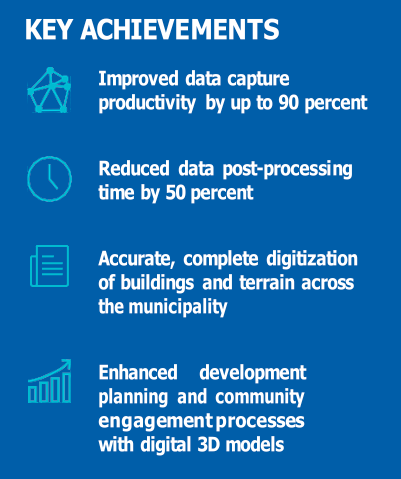 One of Sweden’s grandest and most well-preserved medieval fortresses, Kalmar Castle, sprawls across 2.5 hectares (6.3 acres) and includes turrets, a moat, and a drawbridge. Its size and complex structure made it a challenging project, especially in capturing exposed areas, such as roofs.

Initially, the Kalmar municipal engineering team intended to capture data of the castle with a terrestrial laser scanner, but they found the process slow and the results incomplete. Obtaining data of the castle roof was not possible using traditional tools and methods.

In April 2020, the Kalmar StreamSam team contacted geodata and remote sensing specialist AMKVO to demonstrate Hovermap. AMKVO subsequently conducted a trial to evaluate Hovermap’s performance against that of a traditional terrestrial scanner. The comparison assessed capture coverage, time spent on capture, and accuracy.

“The versatility of being able to switch from ground to aerial scanning is a big win for our survey team. Having this technology will allow us to accelerate the progress of the StreamSam project.”
-Simon Vestlund, project manager, StreamSam

AMKVO used a drone-mounted Hovermap to carry out four 15-minute flights to scan the roof and courtyard of the castle and each of its four sides. AMKVO then completed two 15-minute walking scans to capture the interior of the historic site.

Scanning two sides of the castle using a Trimble SX-10 total station took 10 hours. AMKVO estimated that completing a scan of the entire castle site via this method would take more than two days. 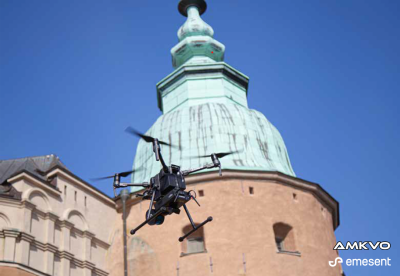 Hovermap was able to completely scan the Kalmar Castle and provide a consistent level of accuracy across the project site, whereas the Trimble SX-10 was unable to capture the complex interior areas and the roof.

Ground control was established with 21 Ground Control Points (GPSs) set up across the site. Hovermap returned an absolute accuracy of 40 mm, which is sufficient for Kalmar’s digital twin and GIS applications.

Point cloud data of the castle captured by Hovermap took three hours to process and merge using Emesent software. Files in .laz format were uploaded to CloudCompare for visualization and analysis.

Using Hovermap enabled the Kalmar SteamSam team to collect and process comprehensive and detailed data of the castle within hours rather than days.

The dataset was imported into CAD software to create a 3D digital model of the entire castle complex.

Point cloud data captured by Hovermap can be imported directly into Kalmar’s software platforms, including Trimble Business Center and Esri ArcGIS. From these, it can be used to create 3D building models and digital terrain and elevation models. Data can also be used to inform flood maps, earthworks calculations, solar radiation, and shadow analysis.

Kalmar has purchased a Hovermap scanner for the StreamSam team to use on the project. Using Hovermap instead of terrestrial equipment has reduced time spent on site by between 50 and 90 percent.

“With the simultaneous localization and mapping (SLAM) technology, we don’t need to worry about GPS. We can scan indoors and outdoors, with and without the drone. The scan accuracy is very good for our 3D modeling and the solution is affordable.”

About Emesent: Emesent is a world-leader in drone autonomy, LiDAR mapping, and data analytics. Founded in 2018, Emesent has since built a reputation for delivering high-quality data capture in the mining, infrastructure, survey and mapping industries. Our flagship product, Hovermap, is a smart mobile scanning unit that combines advanced collision avoidance and autonomous flight technologies to map hazardous and GPS-denied environments. Hovermap is uniquely versatile, it can be mounted to a drone, cage, backpack or vehicle to map challenging, inaccessible areas. With a wide range of applications, Hovermap is being used by customers around the world.