In 2012, GeoSlam introduced the ZEB1, one of the first handheld indoor-mapping systems. The form factor had obvious benefits in terms of mobility: It’s designed to be carried by its operator, so it is relatively simple to use in multi-level environments with obstacles like stairs, or in difficult environments like mines and crime scenes. Unlike a trolley-based system, it can go anywhere its operator can.

It was also designed to be very fast. The device’s simultaneous location and mapping (SLAM) algorithm (which GeoSLAM prides themselves on) works to register a full scan without GPS or control. Lastly, the ZEB1 is simple, turning on with one or two button presses. The idea is that you start it up, walk it around the site you’re mapping, and then you’re ready to process.

But there were still improvements to make. Recently, GeoSLAM has making the rounds with the ZEB-REVO, an evolution of their handheld mapping product and a solution that could make it even easier to map multi-level and difficult environments. In fact, GeoSLAM hopes it will make the process so easy that it will “blur the lines between the role of the surveyor and the technology-savvy end user.”

The most obvious update is that the ZEB-REVO doesn’t require you to “nod” the sensor back and forth like the ZEB-1. Instead, it rotates the scanning head automatically.

As GeoSLAM COO Mark Reid explained to SPAR, this is more important than you might think. When the user is required to nod the device, he says, “what that means is that the user can nod it too fast, and affect the quality of the data. The data that you see, and the structure of the point cloud depends upon where and how the user is nodding the device. With the ZEB-REVO, because it automatically rotates on the motor at a standard speed, there’s much less room for user error.”

In turn, this makes the scanner more versatile in implementation. Since the head turns on its own, it can be mounted on a UAV, a cart, a backpack—even a stick or a zip line. Reid tells me that you can start a scan by hand, strap the device to a backpack part of the way through, then move it to a stick, and so on, without ever interrupting the scan process. “There are a huge number of new applications.” 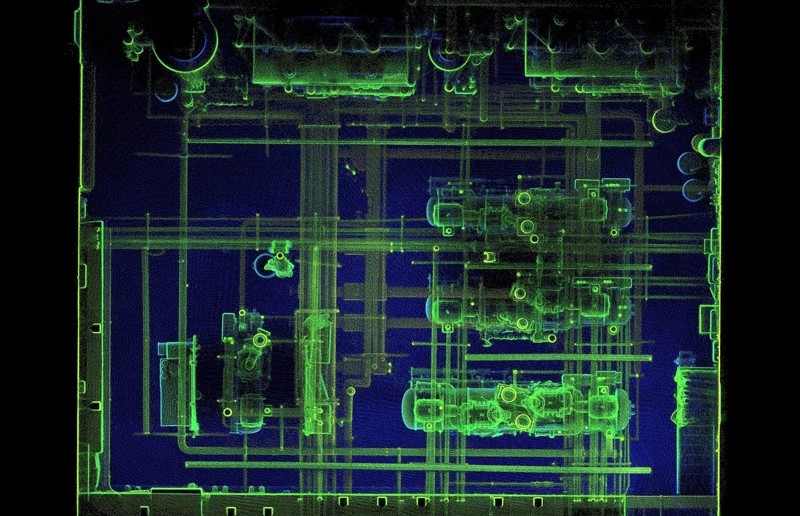 GeoSLAM has also updated the software, augmenting their pay-per-use cloud platform by adding a desktop client. This means customers can process data on site to ensure coverage, with or without an internet connection. It also means that customers can capture and process scans of sensitive sites without ever letting the data leave the premises.

Perhaps more importantly, though, the ZEB-REVO also scans at a higher resolution. “The move to 100hz [from the ZEB1’s 40hz]is probably what’s giving the most value in the ZEB-REVO,” Reid says. “When people used to look at the ZEB1 data, it was quite sparse and they had troubles with that, whereas with 100hz, it’s getting up toward a level that people expect to see with typical terrestrial scanning. They can accept the data much more easily than they did with the ZEB1.”

Reid says that the increased resolution, when coupled with the automatic rotation of the scan head, allows the ZEB-REVO to produce “a much cleaner, less noisy, higher-resolution, and better structured point cloud.”

This means clearer features, which are easier to work with for tasks like automatic feature recognition or manual modeling. Another benefit of this cleaner point cloud is that SLAM algorithms operate with better accuracy because there are more features for it to work with when matching scans. 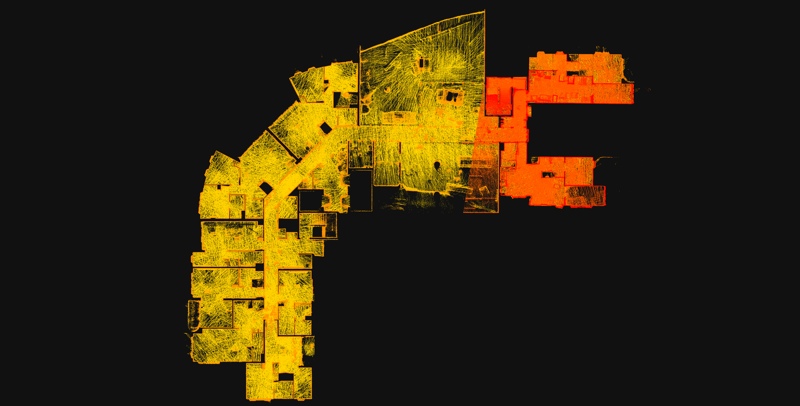 Blurring the Line between Surveyors and End-Users

Since the ZEB-REVO has improved on the ZEB1’s resolution (and saved users from the weird experience of nodding a wobbly stick around) Reid says that surveyors are starting to buy in. The new device still doesn’t give users millimeter accuracy—but it is good enough for many projects and very fast to work with. It can also be used to cover difficult areas, since the results can also be tied into static scans where necessary.

Reid, however, is more excited about a different trend. “We’re seeing the actual end-user say, ‘Well this is so simple to do, that we can do it ourselves, and we don’t need to use the survey company.’ We’re seeing a big trend of end-users starting to look at the technology—whether it be construction, real-estate valuations, or what have you—and using it directly when traditionally they would have to go to a survey company.”

When I asked Reid how the ZEB-REVO compares to the mapping backpacks that have become popular lately, he answered that the main difference is end-user potential. “Backpacks,” he said, “still have relatively high complexity and cost, so they appeal mainly to the mainstream survey industry.” In other words, their focus is on producing the highest-accuracy results rather than being easy or affordable enough to appeal to end-users.

Since mobile mapping will never “achieve the exact same kind of accuracies that you get with a terrestrial scanner,” Reid told me, GeoSLAM has focused on offering these efficiencies in a package that will appeal to the general public. They have focused on getting the same speed as the backpack, but with a mix of “balanced performance, ease of use, versatility, and cost-effectiveness” that appeals to the greatest possible group of people.

You might call the ZEB-REVO an entry-level scanner for the end-user.

With a $30K pricetag, the ZEB Go aims to put SLAM in everyone's hands