The Pro3, which includes a lidar sensor, can scan large-scale construction spaces 4x faster than the Pro2 and with a range of up to 100 meters.

The demand to generate digital twins of buildings both under construction and already built is growing rapidly. Forrester Research reports 55% of global software technology decision makers are already adopting digital twins. Within that growth, Matterport saw 52% growth in total subscribers in the second quarter compared to the year ago period, and currently serves 23% of the Fortune 1000 with its digital twin platform. This week, they have announced a new camera and associated platform aimed to bridge the gap between creating image-based captures of structures to constructing the foundations of a digital twin.

The new Matterport Pro3 camera is Matterport’s most advanced 3D capture device in its lineup, with image and lidar sensors working together to optimize output for both indoor and outdoor scans. It has a 20 megapixel sensor and a 12-element lens, covering an ultra wide angle, which can scan a scene in under twenty seconds.

Matterport has always approached digital twins and scanning from a little bit of a different tact than some of its SLAM scanning competitors, focusing on creating photo-based workflows that were simple and could be done by non-professionals with relative ease. Some have argued, however, that the lack of high-resolution lidar made the device’s use cases somewhat limited. While there was depth sensing and measurement capabilities, the accuracy wasn’t at a level that AEC contractors were necessarily ready to embrace. The Matterport Pro3 camera, along with some back-end improvements to the cloud platform and AI capabilities, however, seems to tackle that criticism head-on.

“The Pro3 camera reflects years of advanced R&D and listening closely to our customers. The result is a breakthrough in 3D capture technology,” said Lou Marzano, Vice President of R&D and Manufacturing.

“The demands of the digital-first industry push our product standards to new levels, making precision, range, and mobility critical to our customers’ success. We put all of this together into a portable device that achieves a new threshold for price-to-performance of commercial LiDAR capture. Some of our largest enterprise customers have already put Pro3 to the test – capturing large outdoor venues from stadiums to campuses with speed and accuracy never before seen. Like the Pro1 and Pro2 that came before it, the Pro3 camera is in a class by itself and I am so proud of the team behind yet another industry first.” 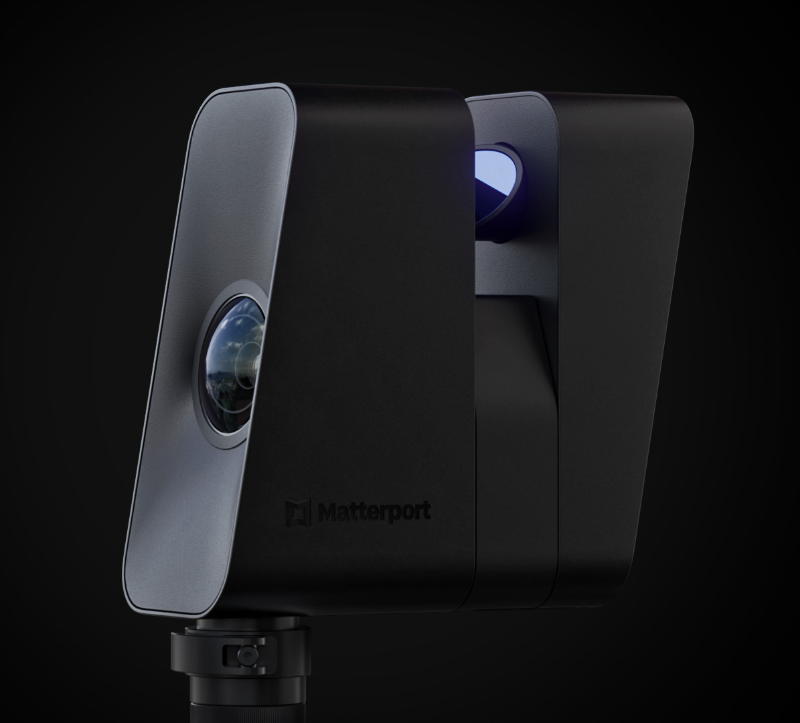 Citing “breakthroughs” in the high-precision lidar sensor, the Matterport Pro3 camera is able to achieve an accuracy of +/- 20mm at a 10 meter range, and is capable of capturing 100,000 points per second at depts between 0.5-100 meters. The Matterport 2 accuracy was between 40-137mm at 7 meters - so this is a significant improvement. While still not as accurate as other SLAM devices - for example, the Leica BLK has a 6mm accuracy - the price point may make the difference, with the Matterport Pro3 priced just under $6000 USD, compared to the $20K+ for most handheld SLAM scanners.

On the software processing side, Matterport’s Cortex AI engine has been upgraded to capture five times the range in each image, which can be helpful when overcoming challenging lighting or complex scenes that include foliage or reflective surfaces.

Matterport has also reimagined the cloud software platform that creates, publishes, and manages digital twins of buildings and spaces, indoors or outdoors. New in this platform is Matterport Views, a collaboration tool that creates separate, permissions-based workflows to manage different tasks with different teams.

According to Matterport, their customers across sectors – factories, retailers, hotels and airlines – report digital twins have “reduced project times by 30% and cut travel expenses by up to 50% through greater remote collaboration.” One commercial real estate customer reported closing sales up to 85% faster. Hospitality customers find bookings and occupancy rates increase 14% for properties with a digital twin. The benefits aren’t just for large enterprises – real estate agents using digital twins win up to 74% more listings and 71% of residential buyers say they would buy a home sight unseen if it had a 3D digital tour.