When developing lidar sensors – size (and cost) have always been an obstacle. Even the most advanced compact lidars, flash lidars and solid state sensors are not that compact. Sure, they are better than the massive, mechanical lidars – but what if you want to apply lidar to something smaller than a car?

Voyant Photonics, a New York-based startup thinks that they have a solution that might revolutionize lidar applications: a chip-based lidar that is as tiny as it is versatile. Approximately the size of a fingernail, the chip promises to have comparable performance to mechanical and micro-electro-mechanical system (MEMS) systems.

Rather than scaling down internal components of a solid state lidar, Voyant Photonics has been pushing forward silicon photonics technology to create a lidar “chip.” A laser beam is directed across the scene without the need for any moving parts, so it can be significantly smaller than other existing lidars.

Silicon photonics is an evolving technology in which data is transferred among computer chips by optical rays. Optical rays can carry far more data in less time than electrical conductors. Traditonally used for communications applications, Voyant Photonics’ approach is reportedly the first to apply silicon photonics to lidar. 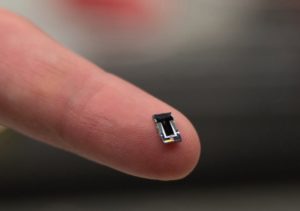 The new chip developed by Voyant Photonics is small enough to fit on a fingertip.

Breakthroughs in lidar technology – especially at such a small scale – might allow lidar to be applied in ways we’re not yet capable of imagining. Voyant Photonics claims that this low-cost lidar on a chip can contribute to making many devices smarter and safer. With the potential to add them not just to cars, but to drones, robots, factory machinery, homes, or even mobile phones, the chip could go places that lidar enthusiasts never even imagined.

Chris Phare, co-founder and CEO of Voyant Photonics likened this breakthrough to the invention of the internet and personal computers – with the technology being developed before it was even capable to imagine what it could do.

With $4.3 million now in hand from its first round of founding, Voyant Photonics will work to get this new technology out of the lab and into the hands of engineers and developers across a variety of fields.

Beyond the automated vehicle and robotics markets, Phare encourages interested companies to reach out if they have ideas for the tiny chip that they haven’t thought of.

“We would love to talk to people who have a burning need for this or a crazy idea that this would enable them to do.”

Microscopic Mirrors Could be the Key to Cheap Automotive LiDAR