A LiDAR for All Applications?

Australian company Ocular Robotics are known for their RobotEye products, sensor platforms designed to meet the sensing needs of a wide variety of industries. This line includes two LiDAR scanners, the RobotEye RE05 and RE08, which Ocular Robotics touts as “the world’s smartest 3D laser scanners” enabling “on-the-fly adjustment of scan region and scan resolution.”

According to the company, the scanners can be used for a whole raft of applications including robotics, automation, mining, agriculture, surveillance, aerospace and defense, and rapid 3D mapping. Are they scanners for all applications?

See the video below for a visual illustration of these modes.

Next, all modes allow you to define scan and laser parameters: the azimuth scan rate, the number of scan lines captured per degree of elevation, the total sample rate, and sample averaging.

The RobotEye sensor platform’s real claim to fame is its ability to change between scanning modes on the fly. Using RobotEye’s C++ library, you can create single commands to change the behavior of the scanner. In the middle of a scan, you can swap scan mode, scan parameters, and laser parameters. In other words, it allows you to tweak your scan as you go, building a full capture by cobbling together different scan modes and resolutions for different regions of the scan.

The RobotEye LiDAR systems do not seem to be designed for absolute beginners. But if you’re a power user with a good understanding of your task, you can set the scanner to capture only what you need, and only at the resolution you need it. Ocular Robotics says the RobotEye LiDAR systems can help you to find the right balance of resolution and acquisition time to complete your projects faster.

For Mapping and Capture
Similar abilities are present in other existing LiDAR devices, but the RobotEye offers a subtle tweak. It does not require you to perform a full low-resolution 360 degree scan, pull up a preview, and then define a window to scan at high resolution. Furthermore, the RobotEye’s sensor platform allows drive components and sensors to remain stationary during capture. As seen in the above video, this means that the mirror does not have to rotate a full 360 degrees if you are capturing a single region—and this saves extra time.

Focused and programmable scanning could be useful for scanning key elements in a higher resolution than the rest of the scan, like points of particular interest. In the petrochemical industry, for instance, this could be existing flanges that are going to be reused, equipment mounts, and so on. Of course, if you are going to scan a specific region and leave out others, it will require thought to be sure that you have captured all the data you need.

Though there is certainly a wide range of possible uses for this scanner, questions of speed and complexity mean the product may or may not be right for your application. 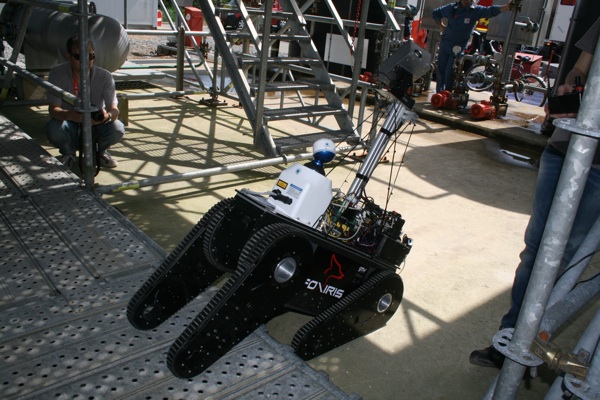 For Robotics and Autonomous Device Applications
In speaking with Ocular Robotics commercial director, Dr. Ramin Rafiei, I learned that the RobotEye LiDAR scanners are especially well suited for use in the field of robotics. Indeed, the scanners are already seeing wide use and recognition in that field—Rafiei had just returned to Australia from San Jose where Ocular Robotics took home a Next Generation Game Changer Award from the 2015 RoboBusiness Conference.

As Rafiei explained the RobotEye RE05 and RE08 LiDAR systems, the scanners “empower a robot or autonomous system to dynamically interact with its environment.” An autonomous platform using a single RobotEye LiDAR scanner, for instance, can “collect all the information it requires for obstacle avoidance, navigation, localization, dense 3D mapping, and object manipulation.” Generally, these tasks would require separate scanners, since each task requires a specific type of behavior from its scanner.

“To navigate between locations,” Rafiei said, “all that may be required is a few sparse lines centered on the horizon that can be updated quickly for obstacle avoidance. For sufficiently dense point data to identify an object on the floor perhaps 20 or 30 lines between -15 and -35 degrees in elevation might be appropriate. To manipulate an object, 60 lines across a 6 degree by 18 degree rectangular region might be needed. Ocular Robotics 3D LiDAR sensors are capable of fulfilling all of these functions with a single device, the behavior of these scanners can be updated moment by moment to be always delivering 3D data from the region and at the resolution needed.” 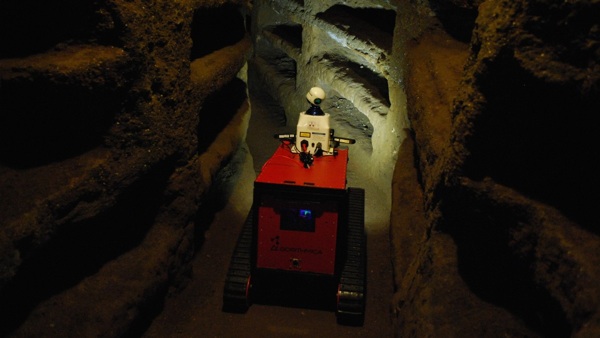 The RobotEye RE05 mounted on the ROVINA autonomous robot

Notably, this flexibility has helped land the RobotEye scanners on a number of high-profile robots, including the ROVINA robots (which SPAR featured here), which are autonomous devices built as part of a European consortium to navigate, map, and capture archaeological sites that are difficult or impossible for humans to enter. “Our RE05 3D LiDAR scanners are mounted on each of the ROVINA robots and are used for all navigation tasks as well as to acquire the high-resolution 3D maps used to build the digital models.”

When mounted on a robot, the RobotEye scanners sound perfect for capturing many environments that are dangerous for humans, for instance certain parts of mines, or disaster sites.

In closing, Rafiei offered one more enticing application for the RobotEye products. “Just imagine how drastically Boeing could increase the dynamic performance of their recently released drone laser cannon if it was built on a RobotEye core.”

It doesn’t get much more futuristic than that.