With the prices of lidar dropping, you probably scan your construction site a lot more than you used to, and ClearEdge 3D has a new solution to help you make the most of it. Verity is a quality control tool that compares point clouds of your as-built against your design model, and helps you verify that work went according to the plan. Simply put, this information helps you catch mistakes before they require rework—and big expenses.

To find out how Verity stands out among similar solutions on the market, SPAR caught up with ClearEdge 3D’s VP of product management, Kelly Cone, for more details.

Where many solutions compare the point cloud data directly to the design model to provide variance information, Verity takes a different approach. It uses algorithms similar to those in EdgeWise (ClearEdge’s software for extracting features and objects from point cloud data) to map the geometry to the point cloud.

“We’re not generating geometry from scratch,” Cone says. “We’re working with the original model data provided and actually fitting that to the point cloud.” This process creates something like an as-built model, which Verity then compares to the design model to generate variance information.

Benefits of this Approach

Cone argues that this method offers fundamental advantages. “For example,” he says, “we’re able to look for rotational variance and translational variance. Basically, we know where a point should be on the geometry based on where it was designed, and we know where it is on the as-built geometry. This allows us to do a geometric comparison rather than just a point cloud deviation analysis.”

Verity’s deviation analysis on a beam obscured by a wall.

Here’s one way that approach plays out: Imagine that you’ve scanned a beam up to the point where it intersects a wall, and this beam was installed at an angle to the wall instead of perfectly perpendicular as intended. Verity will fit the geometry of the beam to that set of points, and that geometry will show the positioning of the whole beam—even the part that hasn’t been scanned.

“We know,” says Cone, “that 12 feet away the angle is compounded. The actual deviation of that beam may be three or four inches, whereas the data from where it was scanned might show a deviation—at worst—of one or two inches.”

ClearEdge’s approach also offers very accurate heat-mapping. Cone offers an example of a pipe that is installed close enough to the right place that the points scanned near the top of the pipe are very near the intended location of the bottom of the pipe. Approaches that compare the point cloud back to the model sometimes mark a portion of the points for that beam as green when they happen to be close to the intended geometry.

Verity’s deviation analysis of a pipe

Verity maps the points to the as-built geometry first, then compares that to the as-designed geometry to determine the deviation. This means that the software measures any point back to the part of the surface it belongs to–not just the closest surface. In the Verity screenshot above, the points on the pipe that differ from the magenta (as-designed) geometry are marked red, no matter how close they are to being correct.

“Fundamentally, Verity helps people understand better how the particular piece of geometry is out of place,” Cone says. “From there, they can figure out if it’s going to be a problem.”

As you might have guessed, Verity won’t tell you if a variance is going to be a problem. However, its integration with Navisworks makes it easy for you to determine that for yourself.

As Cone explains, “once you run the analysis, Verity allows you to update those pieces of geometry in Navisworks to their as-built location. This lets you run a clash detection, and that tells you whether it’s a problem. On top of that, you can compare the data back to the specifications, or send the data off to engineers to get their sign-off on the variance being acceptable.”

When the variance is acceptable, Verity offers an easy way to update the final as-built model. Simply export the points corresponding to the geometry that needs to be updated, and bring that information into your authoring application to update your as-built model.

“You can say, here are five things that are out of tolerance in this piping model that need to be updated in the as-built,” Cone says. “We think it will dramatically simplify the process of updating as-builts by giving people only the information they need to do the job.” 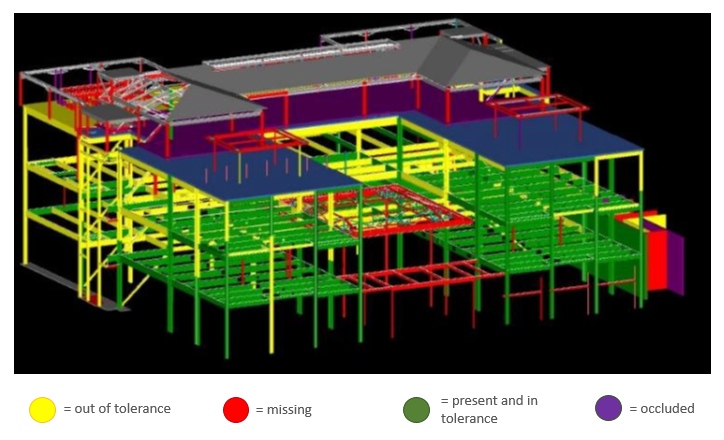 Viewing the whole project in Navisworks

Verity has already found a lot of success with general contractors, who are using the software to manage work in the field and make sure it gets installed in the right place.

When it isn’t installed in the right place, Cone says Verity offers an easy way to identify these problems fast and act proactively. This means “more work doesn’t get fabricated assuming everything was all right, and then gets modified in the field just to work.” It also means you don’t have to go so far as to tear something down and start over.

“There are a lot of reasons why a GC wants to make sure that subcontractors are building work that matches the model. It helps mitigating scheduling and budget risks in terms of schedule overruns, change orders and more. It helps make sure that work gets done on time and under budget.”

On today’s construction sites, many problems don’t get caught ahead of time. Cone says this is because it’s common for general contractors to perform spot checks on critical parts of the project and hope for the best elsewhere.

“That’s all they’re paid to do, that’s all the industry expects, and there’s nothing wrong with that,” Cone says. “But a tool like Verity gives them the ability to check 100% of the scope of work in the same amount of time as it takes them to spot check 5% right now. That’s a pretty powerful thing.”

Put more succinctly, “there are a lot of benefits that come from knowing what’s really there and where it was really placed.”