Weighing only 925g and featuring a small form-factor, the Puck 32MR was built to provide precise real-time localization and object detection for low speed autonomous markets. Additionally, Velodyne designed it to extend vehicle operating time within broad temperature and environmental ranges without the need for active cooling, as well as for scalability and price. Mike Jellen, President & Chief Commercial Officer envisions a broad range of uses for the 32MR. 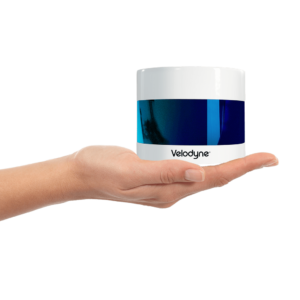 The Puck 32MR™ is the latest addition to Velodyne’s broad array of lidar products.

“The Velodyne Puck 32MR is the perfect sensor to autonomous shuttles and robots, as well as 3D computer vision applications for security and inspection,” said Jellen. “It is perfect for systems seeking higher resolution sensing for mid-range applications.”

Sitting between Velodyne’s Puck Hi-Res and the Ultra Puck sensors specification-wise, Velodyne’s new lidar sensor detects objects within a 120 meters range with an accuracy of up to around 3 cm, features a 40-degree vertical and 360-degree horizontal field-of-view, and scans up to 1,200,000 points per second at a 5 to 20 Hz refresh rate. The sensor also uses 905 nanometer (nm), Class 1 eye-safe technology.

According to Velodyne, by combining high-resolution 3D perception with a broad vertical field of view, the Puck 32MR can accurately detect crosswalks, curbs and obstacles in challenging environments like warehouse aisles. It is designed to provide safe and efficient navigation in roadway, commercial and industrial settings.

Anand Gopalan, Chief Technology Officer of Velodyne Lidar stressed that the development of the 32MR was in response to customer feedback. While Velodyne has not disclosed its pricing, the company says the Puck 32MR is aimed to be a cost-effective and affordable sensor.

“This product fills a need for an affordable mid-range sensor, which our customers expressed, and we took to heart. We strive to meet our customers’ needs, and the Puck 32MR is another example of our versatility within an evolving industry.”

For a few years now, the Silicon Valley-based lidar technology company has been active in providing sensors to the automotive industry. In 2016, the company received a $150 Million investment from Ford and Baidu, and later on opened a mega factory in San Jose, California, for high-volume production. The company wants to continue to bring the power of real-time 3D computer vision to a seemingly ever-expanding array of applications. For the future, Jellen said Velodyne has “a rich roadmap of intelligent sensors and computer perception software.”