The new functionality was used to create a campus-sized digital twin of the Illinois Institute of Technology campus.

One of the first apps to take advantage of the lidar introduced onto certain iPad in 2020 (followed by the iPhone), SiteScape has engaged its user community to find out how to improve and streamline its processes to provide better scans. Since the launch of the first beta, there has been a common thread to that feedback: users want to be able to scan bigger areas, without losing accuracy.

From a technical challenge, this is not simply a matter of storage, or letting its users scan larger spaces at one time, but one of combating the drift that is created by the scanning process. The longer a scan takes, the more likely the results are to drift from parallel, decreasing accuracy. The short-term solution to this is to create a limit on scan size, so that the scans will not have the opportunity to fall out of alignment as readily - essentially, trading size for accuracy.

However, after a year of development, SiteScape have announced that they’ve found a creative solution to this problem, and it comes in the form of the new Multi-Scan feature. When using this feature, users can capture areas up to 5,00 square feet, parsed into up to 10 neighboring scans at once. Through an intuitive alignment process that uses an ‘onion skin’ style overlay (where semi-transparent layers are projected on top of one another), users can quickly adjust separate rooms or scans to align through simple visual cues.

The result can be synched and saved as a single point cloud, which can then provide a complete floorplan or building layout - all captured on mobile devices.

Founder Andy Putch says that their goal is to open up 3D scanning to anyone with a lidar device, and that the simplicity of this process is important.

Early in the pandemic, Prof. Ankit Srivastava was experimenting with agent based simulations to model potential COVID transmission on the IIT campus. To model the IIT campus for these simulations, he started with data from Open Street Maps which gave rough geometries of the building exteriors on campus but to simulate transmission more accurately, detailed maps of the building interiors would be needed. So, in the Fall of 2021, under Prof. Srivastava and Prof. Mohammad Heidarinejad, whose research is in digital twins for architecting and operating smart cities, students began the fantastically ambitious IIT Digital Twin, a new project with the goal of creating a digital twin of the entire IIT campus. Without the resources for traditional tripod-based laser scanners, which start at $30,000 per scanner with high-end models going into the 6-figure range, the class looked to leverage LiDAR on the latest iPad Pros and SiteScape.

Manually documenting the contents and then measuring the dimensions of every room of the 40+ buildings on the 120-acre campus would be a gargantuan task so instead, the class would use SiteScape to 3D scan building interiors and capture point clouds that could be used in standard building information modeling (BIM) programs. 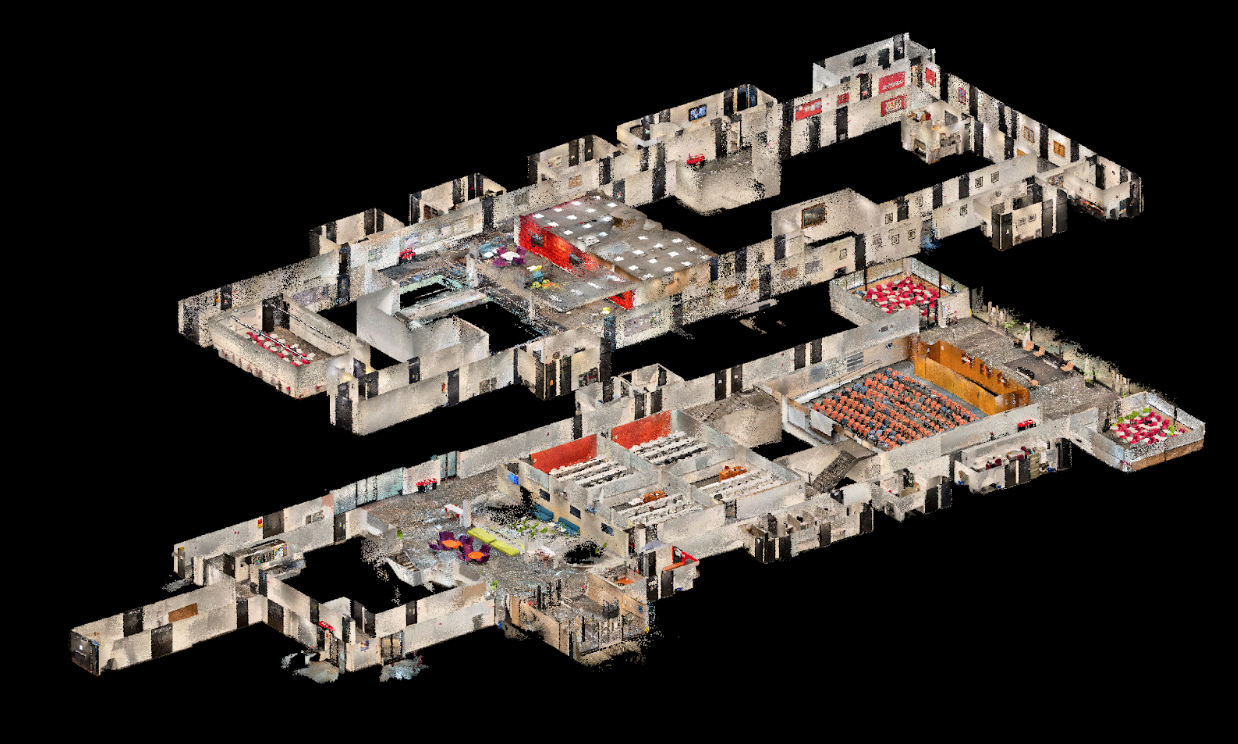 However, scanning at this scale is extremely challenging as just one building scan can be billions to trillions of points creating terabytes of data. In addition, in any mobile scanning system, tracking a device’s location in space creates drift over time - meaning the longer you scan, the less accurate the results. Students had to develop a workflow where they would scan a building in smaller, more accurate sections (more than 200 for some buildings!) and then combine these sections into a single model with CloudCompare and Autodesk Revit. This workflow was effective but cumbersome as scans needed to be aligned in a specific manner and special care was needed when organizing and managing large numbers of scan files captured in different locations at various times. Despite these challenges, the project has had major successes and students have fully mapped 7 buildings totaling over 445,000 square feet.

“SiteScape has been a very useful app for our students in the past year to take scans of different buildings. Students were happy on how the app was able to preserve the geographic location of rooms, allowing a speedy merging of the scanned files and exporting them to different file extensions. I’ve used professional LiDAR scanners and I’m very impressed with the quality of SiteScape scans for indoor spaces,” said Heidarinejad

The Multi-Scan functionality is included in SiteScape Pro ($49.99/month), and interested users can learn more here.