It’s safe to say that single-photon and geiger-mode LiDAR were the buzz at the 2015 International LiDAR Mapping Forum. Now, a full year later at ILMF 2016, the industry’s excitement has only grown. But what do we really know about these technologies? How do we make sense of the sometimes conflicting information we are presented with? In other words, what is the truth about these hyped technologies?

These are the questions that the US Geological Survey asked, and then answered through a rigorous testing process. Then, they presented the results at ILMF 2016.

The purpose of the USGS evaluation was to assess the suitability of geiger-mode and single-photon sensors for 3DEP work. They were careful to note that their goal was not to pick a winner, or even perform a cost/benefit analysis, but only to assess whether the new technologies are suitable for 3DEP work.

To assess these sensors, the USGS and their partners collected single-photon and geiger-mode LiDAR data for a 500-square-mile area of Connecticut, one that Dewberry had already been scanned with linear-mode LiDAR. Next, they made an apples-to-apples comparison of the results.

The USGS worked in partnership with Harris, who gathered data with their IntelliEarth geiger-mode LiDAR sensor under a variety of conditions, including day, night and leaf-on. Sigma Space supplied data gathered by their HRQLS single-photon LiDAR sensor in the same conditions. (It should be noted that the Harris and Sigma Space sensors used for these data collects are earlier generations of their sensors. Many improvements have been made and more are already forthcoming.)

After that, the data was given to two contractors, Woolpert and Dewberry. These firms, which also donated their time, processed the data using their own individual workflows to perform bare-earth filtering and classification, and produce DEMs for evaluation.

From there, the USGS generated a full deliverable from this data for three different areas—one forested, one mixed-use, and one urban.

The data was processed to USGS standards as far as possible as a way of helping the USGS to understand where their standards need to evolve in order to accommodate these new technologies. That is, they wanted to evaluate where the standards did and did not fit the data they were given.

A sample of Harris’ Geiger-Mode Data

About halfway through the presentation, they got to the moment everyone has been waiting for: results. Here is a brief overview of selected categories where they evaluated the sensors.

The USGS found the data from both sensors to be “extremely dense” throughout the project area. The point clouds ranged from 16-33 points meter, depending on a number of factors like location and ground type.

As reported by the USGS, the average density for SigmaSpace’s HRQLS single-photon LiDAR sensor was 23.2 points per square meter at 7,500 feet. The data was densest in the urban area and the mixed-use area.

The average density for Harris’ IntelliEarth sensor was 25.44 points per square meter at 26,000 feet. It was densest in the heavily vegetated areas.

The USGS also performed road analysis to assess the sensors’ ability to handle reflective surfaces. Here, the single-photon LiDAR showed an accuracy of about 30-50cm, where the geiger-mode LiDAR produced data with accuracy of 15-20cm.

They examined profiles in areas of heavy vegetation to assess how well the sensors penetrated through the canopy. The USGS found that first-generation geiger-mode LiDAR sensor from Harris did not offer significant penetration. Again, they were careful to mention that this was the first generation of Harris’ sensor, and that Harris says improvements have been in subsequent generations.

A major objective of the evaluation, they explained, was to assess the absolute accuracy of the sensors.

First, vertical accuracy. In vegetated areas, the new sensors did not meet the USGS specification. However, when considering the bare-earth and open ground measurements, the systems bot met the USGS accuracy standards. As Qassim Abdullah, Senior Geospatial Scientist and Associate at Woolpert explained, with these two providers there is no need to worry about accuracy.

As for positional absolute accuracy, both sensors performed well. The USGS compared the data from the new sensors to the linear-mode LiDAR data, and found differences in the measurements of between a few cm and 20 cm. Abdullah explained that “they all match very well. Despite the difference in vertical accuracy, they’re all within what we’re looking for.” 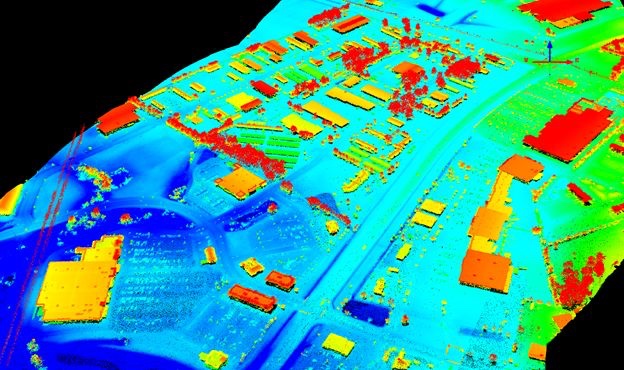 The USGS presented their preliminary findings. Jason Stoker, Elevation Products and Services Manager for the National Geospatial Program stressed that these results are already obsolete due to the introduction of new sensors.

Here are those findings, as the USGS laid them out:

In the particular use cases where the USGS would deploy these sensors, they say the new technologies show definite potential. Put in their own words, the new technologies “warrant additional testing and next steps.” The USGS says they “need to continue to learn about, adapt to, and help these systems come into full compliance with our specifications, and we will adapt our specifications where needed.” They also want to pay attention to the possible lifecycle costs of the sensors, which produce data dense enough that they may require more computing power, storage, and so on.

Put differently, the technology is very powerful but still developing. On the other hand, it’s developing quickly. Improvements are under way from both Harris and Sigma Space to address some of the shortcomings found by the USGS.

So, are single-photon and geiger-mode LiDAR better than linear LiDAR?

As always, the answer is that different technologies are better for different applications and the customer should always select the one that is fit for use.

Or, as Jason Stoker, Elevation Products and Services Manager for the National Geospatial Program, explained succinctly: Though it’s possible that these sensors will some day assume much of the acquisition load performed by the USGS, the important thing is to lay the groundwork for helping these sensors to work alongside existing technologies. The cross-talk, as he put it, has to be good for single-photon and geiger-mode LiDAR to succeed.

“I’m confident you’ll be seeing more of this data in the future,” he said. “But we’ve got to do it right.”