Mapping backpacks have been getting a lot of attention lately. After SPAR 3D published our two-part look at the state of this new technology, I was contacted by Simon Newby, president of 6T3 Ltd. Newby told me that his company had just developed their own backpack mapping system based on RIEGL’s VUX-1HA sensor. He also told me that the system is capable of capturing data comparable to a vehicle-based mobile mapping system.

I caught up with Newby to ask about why 6T3 developed their own backpack, what it can do, and how you might be able to get your hands on one of your own.

To understand why 6T3 made a backpack system, you need to know that the company provides scanning services to a niche industry with very demanding requirements: high-end motor racing. (“Hit a bump at 200mph,” Newby jokes, “and what’s shown in the base maps had better be correct!”)

It all began when they took delivery of a RIEGL VUX-1HA sensor in October of 2015 and immediately recognized its potential. “It was pretty obvious that you could do something different with it,” Newby says. “It’s a game-changing device. We thought we could do more with a VUX than just have it hanging off the back of a vehicle.”

As luck would have it, the company had a project that required them to do something more with the sensor: a job to scan a street circuit.

In case you don’t follow motor racing, a street circuit is a race track composed mostly of public roads. “For one weekend in a given year, the public roads morph into a real race track that’s off limits to normal traffic. Well, a section of this particular circuit—the main straight, actually—was off limits to traffic all the time, other than during a race.”

6T3 solved the problem by porting their vehicle-based mobile VUX-1HA system into a backpack. Then, they were able to scan where their vehicles couldn’t go.

How the Backpack Performs

After solving some tricky power supply problems and figuring out the initialization process, it was time to turn the backpack on and test it out. 6T3 did this by walking it around a small backyard and taking three left turns to complete a square.

“When we make the first left,” Newby says, “we’re walking toward a chain-link fence, and when you get to the end of that walk, you can see the chain-link fence in absolute detail.”

Despite initial concerns, 6T3 found that their backpack was powerful enough for the exacting needs of scanning the street circuit. “Using a mobile terrestrial system on a vehicle, we expect to see that. But when it is mounted on a bag, jiggling around, one thing we weren’t sure of was just how clear the data set was going to be.” Newby called the data set “absolutely perfect, stunning in fact.”

Have a look at the video and decide for yourself.

One of the lessons here is that the component parts manufactured these days—like IMUs and LiDAR sensors—are getting small and powerful enough to build a system that is fit for nearly any purpose. To hear Newby explain it, the key challenge to building their backpack was finding the right way to combine these parts. 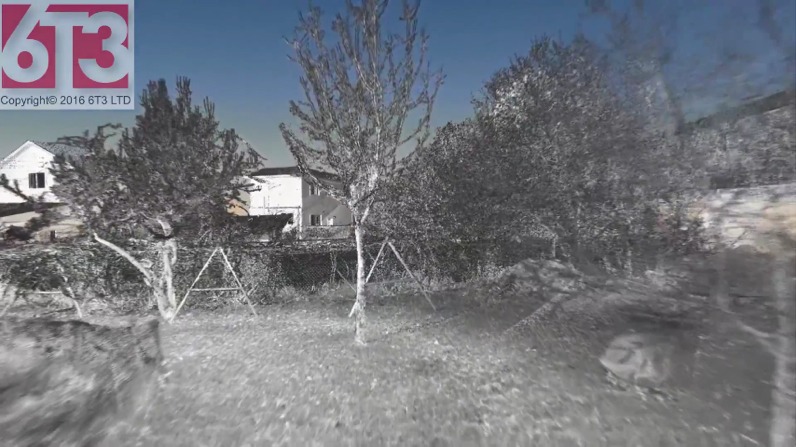 Newby says that the backpack reflects his philosophy that “half of what we do is about having great hardware and understanding its limitations, and the other half is having an artistic eye on what you’re doing. I know it sounds like nonsense, but it’s the truth.”

6T3 got what they needed from the system, but they’re not done experimenting.

“Where we’re taking it now,” Newby says, “now that we’ve got the backpack, is turning it on its head, turning it through 90°. Then, we have the makings of a very portable vehicle system.” This means that a technician could travel with a single system and deploy it as needed to solve the challenges of each individual scan job.

Since 6T3 developed the system for scanning race tracks, you might think the company has no plans to sell the device—but you’d be wrong. Newby told me that he hoped our conversation could be something of a “fishing expedition” to find out if there’s a real market for his backpack system beyond race-track scanning. He thinks forensics, or even historical preservation might offer some other ideal use-cases for a high-definition mapping backpack based on the VUX-1HA.

“The backpack system, I think it’s a mapping device that should be of great interest to many people,” he said. “That’s not to say that it will be inexpensive, but I think there are so many applications out there waiting to find this. And I suspect that there are some really bright people who could figure out how to use it in a very meaningful and profitable way.”

If that sounds like you, Newby says you can find him on LinkedIn and let him know.