In the second iteration of their International Virtual Conference Day, RIEGL opened the virtual sessions with a plenary titled “Unleashing the potential of Ultimate Lidar Data”, focused on how RIEGL instruments, systems, and the corresponding software packages enable end-users to create the 3D deliverables they need and assist the user throughout the entire process from data acquisition to data processing and delivery of the final data product.

Apart from hardware, RIEGL instruments contain firmware and use additional software that complement each other for optimized performance.

RIEGL software packages to process data are an integral part of RIEGL's ultimate lidar solutions. For processing of kinematic data, RiPROCESS is employed. Starting from RiPROCESS version 1.9, its modules have been integrated into one single program, RiUNITE, which manages all steps from target extraction, full waveform analysis, MTA resolution to georeferencing. After that, additional modules can be used for optional tasks such as GEOSys Manager, RiHYDRO or LAS export module. The new version of RiPROCESS 1.9 is now 64 bit, which allows for addressing huge memories, faster processing due to reduced data handover and the required hard disk space has been significantly reduced.

Data processing can now be performed in three different modes: in interactive mode using RiPROCESS on a laptop or workstation, in automated mode by configuring and running RiNUNITE through scripts or in modular mode using the RDB SDK and RiUNITE within user-defined workflows (Python scripts). Processing terrestrial laser scan data or static laser scan data uses RiSCAN PRO. Import and processing of the scan data has been streamlined to require only a handful of clicks for default workflows generating analytics-ready point clouds.

The new RDB library RDBLib v2.3 provides programming interfaces and tools to read, modify, write, and inspect Riegl lidar data. It is used by both RiSCAN PRO and RiPROCESS and enables direct exchange of scan data between static and kinematic applications. With the RDB library, RIEGL now opens the gate for third-party software packages to natively read, write and modify and write RDB data.

Solutions for the Mining Industry

Last year, RIEGL introduced the Riegl VZ-i-20M heady-duty camera for harsh environments. The LIS GeoTec plugin is a RiSCAN PRO plugin for geotechnical analysis of scanned rockfaces (figure 2). It enables a detailed analysis of the entire rockface: contact-free, fast and without exposing staff to danger. It facilitates the calculation of surface normal, dip angle and dip direction. The surface normals are further analyzed to detect clusters of pre-dominant surface orientations, which are used for data classification and visualization on a polarplot diagram.

RIEGL released a set of mining apps for its VZ-I series: RIEGL's Monitoring app enables automatic change detection by comparing and visualizing differences to a reference dataset. The DesignComp app performs a data comparison to a given 3D design model, visualization of undercut and overcut to support machine operation. Finally, the SlopeAngle app performs a calculation and visualization of local slope angles, for example for supporting loader operations on correct material dumping.

Bathymetric lidar is one of the most effective and cost-efficient technologies to capture topographic features both above and below the waterline and to provide accurate depth information at high resolution.  A presentation titled “A California Escapade: Field Trials of RIEGL’s VQ-840-G Bathymetric LiDAR System” evaluated the performance of the VQ-840-G, a full system solution that is still small enough to be installed on a heavy-lift drone or a low-flying helicopter or even a low-flying small aircraft, on select sites in Southern California.

The sensor was installed on one of NV5’s aircraft. Two sites were selected: the first one being a coastal area near San Pedro to test different sensor settings and a site in Morro Bay consisting of a small, inland bay channel, a river, and a coastal area where bathymetric data had been collected two years earlier using the RIEGL VQ-880-G-II, as well as sonar data. In March 2021, multiple flight lines were flown that characterized all different conditions within this site.

The 2019 data was planned to be acquired at low tide to get the deepest penetration into the water, but flown when the water just came back in. For the 2021 data capture, the lesson was learned that the low tide is the dirtiest tide as the turbidity is remarkably high. So, this time, the acquisition was planned when the water condition was as clear as possible and ended up flying at high tide when the water was coming back in. This meant that for the 2019 data capture, a lot of performance capability was left on the table due to the high turbidity, although in the end decent results were obtained. 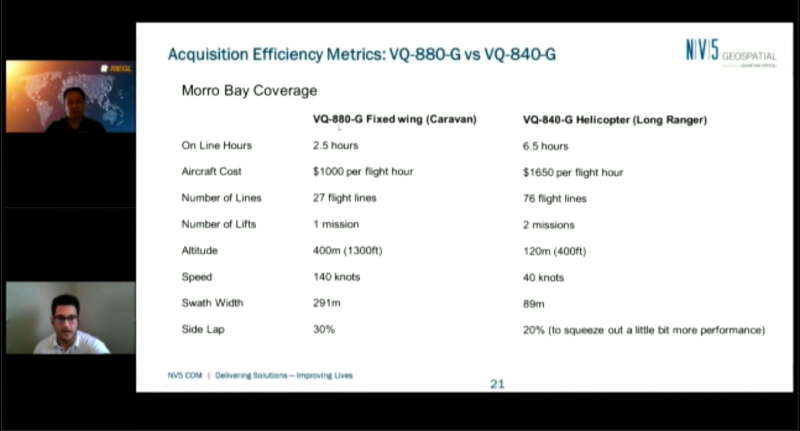 Comparing the efficiency of both sensors, the VQ-840-G has a smaller footprint than the VQ-880-G and is designed to be on much lighter payload. Because of that, there was a little less power and a lower altitude needed to be maintained. To maintain the same density on both sensors, the flight altitude of 120m (400ft) for the VQ-840-G was lower than that of the VQ-880-G (400m or 1300ft). A smaller swath width for the VQ-840-G meant less flexibility in terms of flights lines that need to be obtained to cover the whole area of interest, which resulted in a larger amount of on line hours and a higher project cost per hour per aircraft (see comparison above).

RIEGL is Attending, Exhibiting, and Presenting at ILMF