Over the past few months, you’ve probably read about a new-sounding 3D capture technology called PhoDAR. Like many new 3D solutions, it promises an alternative to LiDAR with lower collection and processing costs. Sounds good, but is it all it’s cracked up to be?

PhoDAR is a portmanteau word that joins the words “photography” and “LiDAR.” The technology creates 3D point clouds by processing high-res imagery.

If you think it sounds a lot like photogrammetry, you’re right. PhoDAR is another name for structure from motion (SfM) photogrammetry. It’s misleading to call this 3D mapping process “PhoDAR,” since it doesn’t use ranging hardware as the “DAR” part of the name would indicate. Like other photogrammetric methods, it uses simple camera hardware.

That’s why, for the rest of the article, I’ll be calling the technology “SfM.”

Will it Disrupt the LiDAR Industry?

When a new (or newly repackaged) technology pops up, we often pit it against traditional LiDAR. We want to know—Will it replace LiDAR? Is it going to “disrupt” the industry? Is it a giant killer? Is it going to change everything? 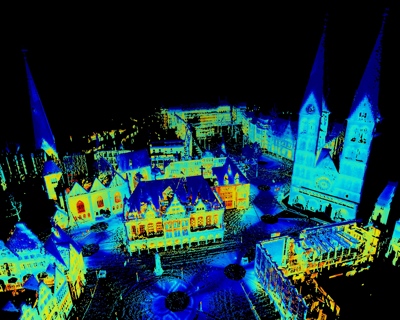 In this case, no. “I do not think SfM replaces LiDAR at all,” says GeoCue’s Lewis Graham by email. “There is a Venn diagram of SfM and LiDAR. There is a small overlap region between the two where one might choose one technology or the other, but most of the diagram does not overlap, making the choice of technology very clear.”

He gave me the following example to illustrate his point:

We were in comparison with a mobile laser scanning company at a mine site this last summer. The customer wanted to compare SfM from drone imagery (we were providing this technology) to a high-end mobile laser scanner. They had each of us scan a complex stockpile of a known volume. We were within 0.5% of the known volume. The laser scanner company was off by 11%. Was our technology better? No. The laser scanner guys had to estimate the top of the pile because their truck-mounted scanner could not “see” the top of the pile. A classic example of a misapplication of an excellent technology.

(Lucky for you, SPAR 3D has already put together a guide to help you decide between LiDAR and photogrammetry for your next UAV project. Read it here.)

By now you’ve probably realized that the headline for this piece is a trick question. (With almost any headline that poses a question, the answer is “no.”)

Like any other new (or new-sounding) 3D technology, PhoDAR/SfM is not going to make any existing tools like LiDAR obsolete, but rather add another powerful tool to the toolbox. It will work better than LiDAR for some applications, and worse for others. The key is being educated enough to know what’s really best for the needs of your budget and your project.