When NCTech recently announced a partnership with Google, one important item got lost in the shuffle: NCTech is also releasing a low-cost consumer 3D capture device.

Called the VRC (for “Virtual Reality Camera”), this small device will cost as little as $500. It includes four Intel RealSense sensors, as well as cameras spec’ed to capture the HDR imagery that NCTech has made its name on. In about a minute, the device completes a full sweep to generate a spherical image complete with depth information, out to a range of 15 meters.

When I caught up with NCTech CEO Cameron Ure to find out more, he explained that he thinks of the VRC as the natural next step after the release of the popular LASiris VR.

“When we announced the LASiris VR at SPAR 3D,” he said, “we had extensive discussions with people in the GIS and AEC markets who were really excited by the opportunity to bring reality capture into new applications within their workflow where they couldn’t justify using the higher cost laser scanners currently available, and where they didn’t need survey-grade accuracy.”

NCTech’s customers are already using the LASiris VR for pre-construction project planning, project monitoring, facilities maintenance, and even forensics. Still, the company knows that the $13,000 price tag on the LASiris VR is still high enough to turn some potential customers away. Ure tells me that the $500 VRC will make 3D capture accessible to a much wider user base, and perhaps even help “democratize” the technology–like the industry has been trying to do for years.

“For an enterprise user,” he argued, “this price point means that the financial barrier to entry is virtually eliminated. So wherever there is a possibility for reality capture to improve an operation or part of a process, it can be applied without financial concern.” 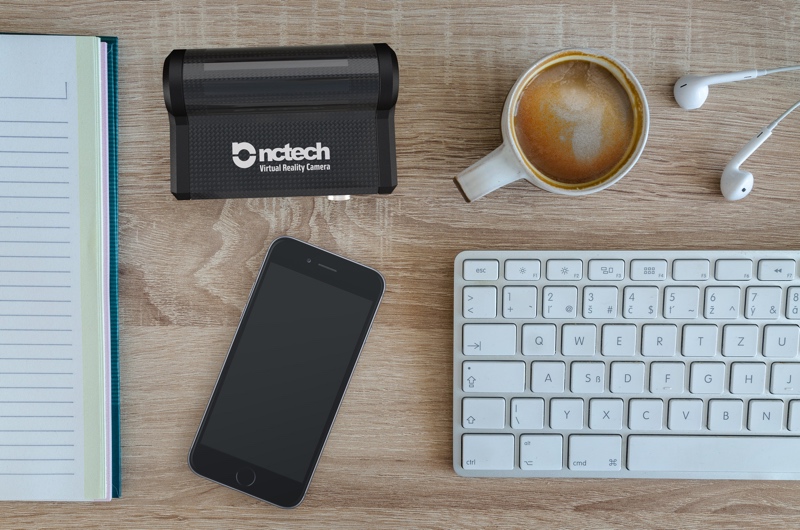 The VRC looking small and hip in a modern workspace

How Does the Data Compare?

If you’re worried about using the VRC’s RealSense instead of the lidar-equipped LASiris VR, Ure says the main difference between the two products is not the quality of the data, but the range of capture.

Since NCTech is marketing the VRC as a consumer product, I made sure to ask—What kind of consumer would buy a 3D capture device like this?

“This is where things become really interesting,” Ure told me. “Beyond dramatically expanding technology adoption in markets that already adopt 3D, we see a bigger opportunity in opening up reality capture for completely new markets and industries that have never considered it before.”

He says he sees the VRC as a good match for real-estate, travel, training, and education. In other words, the VRC is primed for use in markets that have the most use for VR content (the device’s name should have tipped me off). Talking to Ure, it became clear that VR could be the strongest force driving lower costs for 3D capture tech, and could even bring about the true democratization of 3D technology.

“As things stand today, the bulk of VR content is created by high-end digital production houses, and is aimed at high-traffic consumption applications like video and gaming. For VR to infiltrate other industry areas, the relationship of content creation and consumption needs to be flipped so that user-created content becomes dominant.”

“But to achieve this,” he continued, “the world needs consumer-priced capture systems.”