Leica Nova MS60 is the new and improved version of the world’s first MultiStation, combining high-end total station capabilities with 3D laser scanning, GNSS connectivity and digital imaging. The new Leica Nova MS60 MultiStation merges several technologies, enabling users to get into 3D laser scanning easily and scan at a speed of up to 30,000 points per second. It can also be used as a high-end total station where users can benefit from its digital imaging and GNSS connectivity.

The target customers stem from industries such as topographic surveying/mapping, building construction, heavy construction and mining and there are numerous projects where the MS60 can be utilized. The most typical projects include surfaces and volumes in construction and mining; analysis of complex structures and objects within plant, marine and utility projects; measuring buildings and structures; façade, elevations and heritage work; traditional topographic surveys for surveying and mapping; monitoring measurement and analysis of ground and structures. 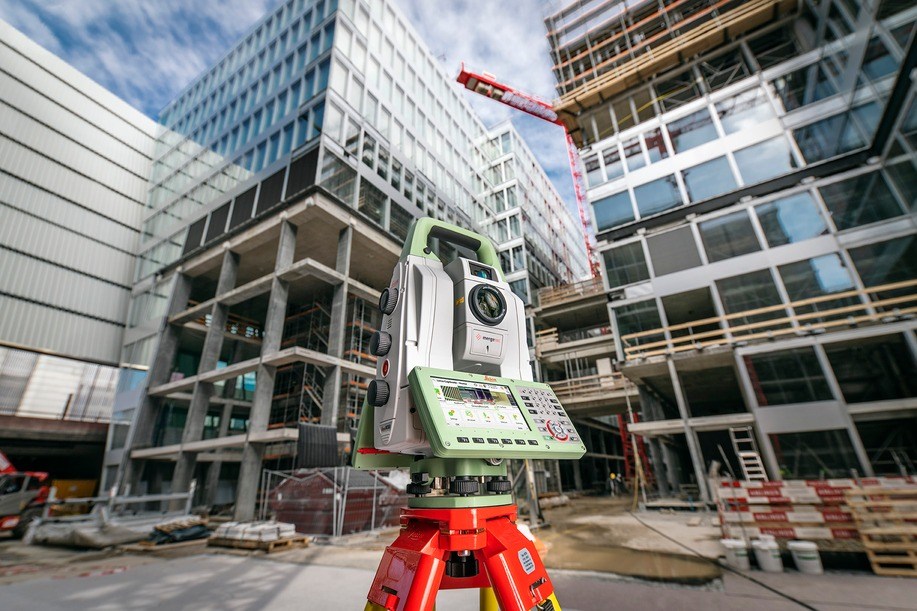 The scan management has been enhanced by adding scan management functions such as the re-use of scan definitions or stop and re-start functionalities of a scan. This enables the completion of a scan at a later time. This is very useful when someone asks the surveyor to quickly measure or stake a point while in the middle of scanning an object. The scan can now be stopped, the point staked or measured, after which the scan can be continued.

DynamicLock is new for the TS60 and was already available for the previous MS60. The Dynamic Lock functionality enables an enhanced lock-on capability onto moving targets. There is no need to stand still and wait for the instrument to find and lock to the prism. Thanks to ATRplus and Dynamic Lock, the MS60 gets the best automation performance with a larger area for searching and locking onto a moving target. The AutoHeight functionality is used to get the instrument height with a simple press of a button.

mergeTEC fuses different sensors and technologies with a thought-through workflow to assure complete performance during all steps, from the data collection, verification and processing to the deliverables. With mergeTEC, Leica Geosysems merges technologies on the one hand and data on the other. First off, the user is given the power to select the appropriate measurement technology for the task he needs to perform. He can choose from enhanced and outstanding total station functionality, GNSS connectivity, digital imaging and 3D laser scanning.

The second part of mergeTEC is merging data. Images are referenced to total station measurements, which are then complemented by complex 3D data. The resulting point clouds get colored by the image information. To make it even more efficient, all data perfectly fit within the same coordinate system, globally referenced by GNSS measurements or by measuring known points. Technologies are merged because it empowers the user and solves many on-site problems.

Leica Nova MS60 comes with the Leica Captivate onboard software, which also runs on field controllers and tablets. The touch technology and user-friendly apps enable users to perform a variety of surveying tasks. While Leica Captivate captures all data in the field, Leica Infinity processes the information back in the office, helping users easily manage, process, analyze and quality check their data. Leica Captivate enables visualization, processing and analysis of the point clouds directly in the field. Applications like the Inspect surface app, quick volumes or Tunneling use the point cloud data for further processing in the field. As-build checks deliver min./max. deviations. Thanks to the red laser pointer, the min/max positions can be identified with the laser pointer and allows taking further actions on the construction site.

Point clouds scanned by the MS60 can be visualized and processed directly in the field. By using, for instance, the Inspect surface applications, the point cloud can be compared to design data directly in the field. Areas of high deviations can be marked by the red laser pointer. This enables quick actions in the field and does not require post-processing in the office. Looking at post-processing in the office, there are several software packages available. Leica Infinity supports the scan data of the MS60. Furthermore, the MS60 scan data can be imported into reality-capture software packages such as Cyclone or CloudWorx.

Scanning accuracy (range noise onto a fitted object into the point cloud) is [email protected] for 30kHz mode and, for instance, [email protected] for the 1kHz scan mode. The scan ranges are up to 1000m depending on the selected scan mode as well as the surface reflectivity of the object to be scanned. While working together with customers on their use cases and performing numerous tests on the MS60, the majority of the indoor and outdoor scanning tasks that Leica Geosystem  customers need to perform happens within the distance of 30 to 40 meters.

The previous MS60 did a scan with a so-called “vertical-scan-pattern”. This means scanned points were only measured and stored as the telescope moved up and down, with a small horizontal movement between each up and down movement. In addition to this “vertical-scan-pattern”, the new MS60 also has a new “spiral-scan-pattern”. This is mainly used for full dome scans, upper-dome scans (zenith scans) as well as for band scans. There are two significant advantages to the spiral-scan-pattern: first, points are scanned a lot more quickly than the vertical-scan-pattern, and second, there is no clustering of scanner points close to the zenith. The difference between the two scan patterns is shown below – both screenshots show the scan of a ceiling with the zenith in the middle:

The Inspect Surfaces app enables the user to perform point cloud analysis directly in the field. The app extends the application area of the MS60 to areas like tunneling and road applications. The key feature of the App is the 3D visualization of measurements compared to a reference surface. It saves time and money by enabling the surveyor to make decisions directly in the field. There is a wide range of potential use cases for the app, for example checking the flatness/levelness of floors, the verticality of walls or the correct positioning of cylindrical silos. The main benefit for the user is that problem areas can immediately be visualized and fixed by using the red laser of the total station. Returning to the field after processing the data in the office is not needed in this case.

New total stations from Leica lean in to automation