As technology for detailed 3D terrain mapping continues to proliferate and evolve, the demands of customers who need the collected data – from cities to government agencies to developers – continue to change as well. Rather than being content to capture detailed imagery once every five to ten years (as was standard), the demand is now for capture every one to two years – or even less. Customers also want lower costs for data points, driving a desire to capture larger swaths at higher resolutions.

To answer these demands, Leica Geosystems has released the TerrainMapper-2, their latest linear-mode lidar airborne sensor. The system is designed to be modular, offering flexibility for a variety of applications from narrow-swath corridors to high altitude maps of complex environments, all with an unmatched point density.

The new sensor can also be upgraded with four additional oblique cameras, turning the system into a 3D city mapping machine. This configuration is known as the Leica CityMapper-2. The unique modularity offers users a long-term upgrade path as their our business continues to grow.

Focusing on a Hybrid Sensor Paradigm and a Modular Approach

Ron Roth, Product Manager for Topographic Lidar at Hexagon Geosystems, talked with SPAR 3D earlier this year about how the TerrainMapper-2 came to be, and what he sees is the future of hybrid sensors. 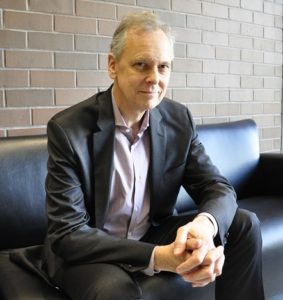 “One of the things that made us go this direction from our existing Terrain Mapper was that we wanted to make the instrument as flexible as possible and as scalable as possible. This has been a constant theme with our development of airborne lidar systems for almost 20 years now, and we’ve already tried to make systems with a construction that allows users to add or subtract features or migrate to the next levels of development along that past. What we’re trying to do is drive to higher and higher efficiencies – and over the last two to three years we’ve really been driving along what we call a ‘hybrid sensor paradigm.'”

This hybrid sensor paradigm means that users can’t collect only lidar data or image data, they will need to collect many different types of data in the same flight. Over the years, Hexagon has been building towards this by attaching cameras to their lidar systems, says Roth.

“So when we collect the data, we collect it all on one kind of media – you don’t have different types of drives coming out of different instruments that you then have to download to some processing station – it’s all recorded in one place, transferred in one easy process. And then all the data is processed together”

“It’s not just a matter of having LIDAR data and having images that go with it but you can actually create more accurate models of the terrain below when you have both technologies operating together.” Ron Roth

This new release aligns with their push towards hybrid, flexible sensors that take in more data and are able to produce results that are better than a sum of their parts. For example, when the matching algorithms struggle with occluded areas, the addition of lidar data can bring that detail to light.

“It’s not just a matter of having LIDAR data and having images that go with it but you can actually create more accurate models of the terrain below when you have both technologies operating together,” says Roth.

Overall, the release of TerrainMapper-2 is a logical evolution from their previous products, especially following the release of CityMapper-2 at INTERGEO in 2019, and the new 150 megapixel cameras that were available for CityMapper-2. The TerrainMapper-2 is positioned to be a replacement for the current TerrainMapper system, which takes advantage both of the new camera and of advances that have happened since then in integration and processing. Roth emphasized that though it is a replacement, are also upgrade paths available for customers with existing TerrainMapper systems – taking advantage of the modular design of the sensor.

“We can take some of the modules and components that are used in a customer’s existing system, bring those over into a new system and preserve much of the value in their original purchase. This has been something that’s been the strategy has been very successful for us over the years where people were able to upgrade to the new generation of technology for much less than the cost of buying an entirely new system.”

For more information on the TerrainMapper-2, visit the Leica Geosystems website.