How Resolve is enabling real-time, remote collaboration with VR

The company can render massive BIM files, and can now overlay these models in the real-world with AR capabitlies.

For a long time, augmented reality (AR), virtual reality (VR), and extended reality (XR) have been promised as the tools of the future for a variety of industrial and social use cases, but that idea has mostly been more theoretical than tangible. However, while there is still skepticism around some of the social use cases of this technology, the last couple of years have sped up development and accessibility for these tools in enterprise settings. There are many industries that have, can, and will take advantage of the AR/VR/XR toolkits, but construction and facility management is becoming one of the most logical and fruitful.

At this point, the industry has generally accepted 3D visualization tools as important and valuable assets to be used throughout the lifecycle of a project, and AR/VR/XR only adds to the value things like BIM and digital twins already provide. Whether it be using AR on-site to compare designs to as-built progress, or to overlay a design and check for potential clashes before construction proceeds, or using VR to enable seamless collaboration while working remotely, firms in the construction industry are showing a willingness to at least give these tools a shot.

One of the companies that is specializing in AR and VR tools specifically for this industry is Resolve, whose focus is that collaboration aspect of design projects. The New York-based company is still in its relative infancy, having only been founded in 2021, but they have already made significant inroads with key integrations to ensure their goals are being met. In their words, they provide “a VR meeting software that connects operational teams with design teams to help produce safer work environments in the most complex facilities.” 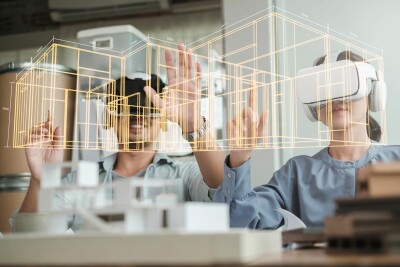 With their Wellington Engine, the company's 3D engine, Resolve is able to “comfortably render models with hundreds of millions of polygons,” a feat which they say they are the first to achieve in a commercially available tool. In other words, they can handle massive amounts of data from a variety of file formats – including but not limited to models from Revit, Navisworks, and Smartplant – supported by BIM 360 Docs via the software’s integration with Autodesk Construction Cloud. All of this visualization can be done remotely using Meta’s Quest Pro, released earlier this year. Stakeholders from operation and facility teams can use these headsets to join design meetings in VR as opposed to traditional screen-sharing methods, providing a more realistic environment with which they can use their experience and expertise to more easily spot potential operation issues. Resolve claims their tool has increased the number of operational issues found by 10x.

This kind of collaborative tool is part of a larger trend within the construction industry, which is working both to overcome its reputation of being relative laggards in technology adoption as well as reduce budget overtures and project delays, often sparked by unexpected clashes and other issues during construction. As we’ve discussed before, collaboration between different stakeholders can be a key to unlocking this greater efficiency, something that is becoming more of a challenge in recent years with more work being done remotely. With Resolve’s VR software, that key collaboration can still be done with accurate 3D representations of job sites even without stakeholders being together in-person.

One of the biggest additions to the Resolve toolbox came with the October release of the Quest Pro, allowing for AR capabilities within the software. The new Quest Pro headsets feature color passthrough cameras, which utilizes sensors on the headset to approximate what would be seen by the user if they could look directly through the headset. Using that passthrough feature, Resolve is able to take models brought in through the Autodesk Construction Cloud integration and overlay them on a real-world environment, providing even more accurate visualization of how an addition could potentially clash with the already-built environment. Within this view, users can also make annotations over portions of the design to note mark potential changes or clashes.

The coming years promises to bring rapid development in AR/VR/XR spaces for a variety of use cases, with 3D visualization becoming more valued and more accessible as technology improves. We’re in the early stages of these tools, though, and cutting edge firms can already take advantage of these capabilities. As remote work only becomes more common and collaboration more important on these projects, tools like the software provided by Resolve should prove invaluable to forward-looking organizations aiming to streamline their efficiency and improve their design process on the fly.