YellowScan, a company focused on creating new and more efficient solutions for UAV Mapping, was at ILMF to showcase two new products: the YellowScan VX, and Surveyor Ultra.

In a partnership with RIEGL, YellowScan developed the YellowScan VX, a high precision & long-range LiDAR solution for UAVs. Based on the RIEGL miniVUX system, the VX features a flight time of 1.5 hours; a precision of 1 cm, with an accuracy of 2.5 – 5 cm depending on the IMU; a laser scanner frequency of 100 kHz, and a weight of 2.5 – 3 kg with battery included (again, depending on the IMU).

Additionally, it can fly up to 350 to 400 ft., and it supports long-endurance flights, especially when mounted on VTOL or fixed-wing drones. This means “it allows for a higher return on investment (ROI), because you can fly higher, faster, and also cover a larger swath,” said Pierre d’Hauteville, YellowScan Head of Sales and Marketing.

Just like any other YellowScan product, Pierre added that with a simple press of the yellow button, “the flow of information goes to LiveStation in real-time”, allowing for instant data generation right after landing.

One of the focus on developing the YellowScan VX was power line inspections. Whereas previous YellowScan products limited pilots to a 200 ft. flight altitude, the opportunity to fly at higher altitudes with the VX opens up the doors for YellowScan to industrialize a power line maintenance solution.

The YellowScan VX package includes a multi-echo laser scanner (up to 5 echoes), a single board GNSS-Inertial solution Applanix APX15, an on-board computer for continuous data acquisition and processing, and the 1.5 hour battery. 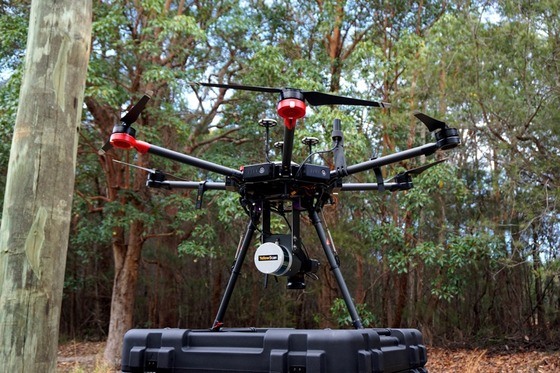 Furthermore, YellowScan announced its partnership with Velodyne, one of the top LiDAR manufacturers in the industry, to create another new product: the YellowScan Surveyor Ultra. By using Velodyne VLP-32, this new Surveyor version can “fly much higher, and with twice as much density in terms of point cloud than we’re used to with the YellowScan Surveyor that we have introduced two years ago,” d’Hauteville explained.

With 600,000 scans per second, the VLP-32 is ready for long-range flights, it can cover up to 100m, and weighs only 1.7kg. Additionally, with the VLP-32, users not only receive real-time, in-flight information during a drone mission, but can now send their drones on image-focused missions, even during challenging weather or environmental conditions.

As to which applications the Surveyor Ultra will work best, Pierre said forestry, archeology, and environmental research are some of them, as those “require long-endurance flights, high above the trees, sometimes over rocky mountains and rugged terrains” which could be difficult to operate with a standard product.

This Surveyor Ultra package comes with a multi-echo laser scanner (up to 2 echoes), a single board GNSS-Inertial solution Applanix APX15, an on-board computer for continuous data acquisition and processing, and a 1.2 hours-autonomy battery.

Although d’Hauteville didn’t disclose any information about future plans, he mentioned YellowScan has hired more R&D engineers to innovate simpler process flows and software, but also to develop lighter and more powerful sensors.