DeWalt is innovating AEC data capture at the point of work

If you visited DeWalt’s booth at AEC Next 2018, you saw innovative tools like job-site WiFi systems to plugins for Revit that automate the placement of hangers for MEP systems. It would have been easy to miss that DeWalt is 94 years old, and the products on display represent a critical turning point in the company’s development. Historically known for tools like circular saws, impact drivers, and power drills, DeWalt is currently focusing a lot of energy on the digital tools that are defining the current moment in AEC.

As DeWalt construction technology specialist Josh Bone explains, the company is “ready for the transition from the more traditional tools. They see that these digital tools are going to be the tools of the future. That’s where construction is heading, and if we’re not paying attention to that, we’re falling behind.” 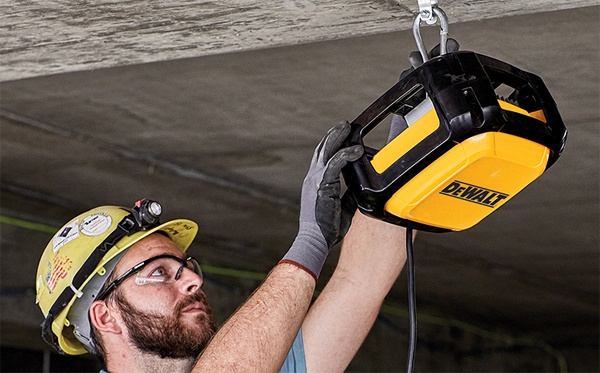 At the point of work

DeWalt is entering the digital space in a way that suits its history: the company is continuing to focus its efforts on helping the people in the field. “Our customer,” says Bone, “has been that person using the saw. This group has been underserved in the industry—a lot of the focus is on the GC, the management, the architect, and the engineer.”

To find out precisely what kinds of digital tools these customers needed, DeWalt started doing field research by speaking to people about their daily frustrations. A lot of them complained about poor connectivity in the field—with no WiFi there is no way to gather data from a sensor, or even run some of the complex software used on the job site.

“That lack of connectivity affects so many tools that our customers are using,” Bone says, “from BIM360 to Procore to Bluebeam to PlanGrid. OK, we have offline modes, but none of those tools are as good as they can be without connectivity.” Without good jobsite WiFi, a job site can only really expect to collect and interact with data in the trailer. That means the spots where the work is actually happening are left out of the equation.

Feed the need for data

When Bone explains the value of building better connectivity to enable data collection at the point of work, he uses a metaphor: disease research. It is exceedingly difficult for researchers to understand diseases when they don’t have data. A few prominent examples have shown that when scientists begin to “gather as much data as possible” on these diseases, Bone says, they can start to spot trends in therapies, medications, and see more clearly what works and what doesn’t. Things start getting better fast.

“It’s kind of like we need to treat construction as a disease,” he jokes. “We’ve got so many things that are broken—so many unknown unknowns—because we don’t have the data to make the right decisions. We’re not even close to having the data, and I feel like the most important place to start collecting that data is in the field at the point where you’re hanging pipe, where you’re installing conduit. That will help us understand: What’s the time for a process that works? What’s the energy expended in doing that? How can we help with those processes?”

DeWalt’s new place in the market

Given the big changes happening at DeWalt, I asked Bone where the company sees itself fitting in the competitive AEC market of 2018.

“We’re trying to find our place,” he notes. “Many people are at a point where they’re inundated—just like you and me—with something new every week. They’re struggling to keep up with it now more than ever, and I see a lot of that same concern and frustration over falling behind, asking, Is there something our competition has seen that we’ve overlooked? Is it giving them competitive advantage? We’re still trying to figure out where we fit in this new tool space by asking how can we best help our customers.”

The key, he says, is talking to their customers, those underserved people out in the field doing the building, to find out what their problems are. “Let’s listen to our customers and understand what their needs are, and what’s the best place for us to play,” Bone concludes. “Nothing’s off the table.”

By putting project management on the map, Matidor.com empowers collaboration

By putting project management on the map, Matidor.com empowers collaboration