What’s the UK BIM Crew and why is it going global?

LONDON – Are you fairly convinced that Twitter is best used for following the exploits of Justin Bieber and complaining en masse about the entertainment event du jour? Then you probably didn’t notice (or attend) BIM For Free, a free day-long conference hosted here in November at Ramboll’s London offices, where about 200 BIM professionals gathered to hear a series of case studies and overview pieces presented by Ramboll, Case Inc, the Mace Group, KSS Group, and others.

“There’s been a real proliferation of expensive corporate events focused on BIM that only ‘strategists’ and the like could get to,” explained Matt McCarter, CAD technician with the Capital Programmes Directorate at the London Underground. “So, out of frustration, someone tweeted ‘why don’t we organize our own conference?’”

Within 24 hours a slate of speakers had volunteered and six weeks later the event was held.

“It was just sharing experiences on projects,” McCarter said, “sharing protocols they work to … It was just giving to the community and sharing and helping the industry evolve.”

In fact, the group of BIM professionals in the UK on Twitter has become so tight they’ve given themselves a moniker – the UK BIM Crew – and begun organizing get-togethers at the pubs in London and at conferences where many of them are in attendance. There’s nothing formal about it, though.

“There’s no leader, no group of people who can and can’t enter,” McCarter said. “It just evolved from Twitter. No one’s quite sure who started the hashtag or when.” 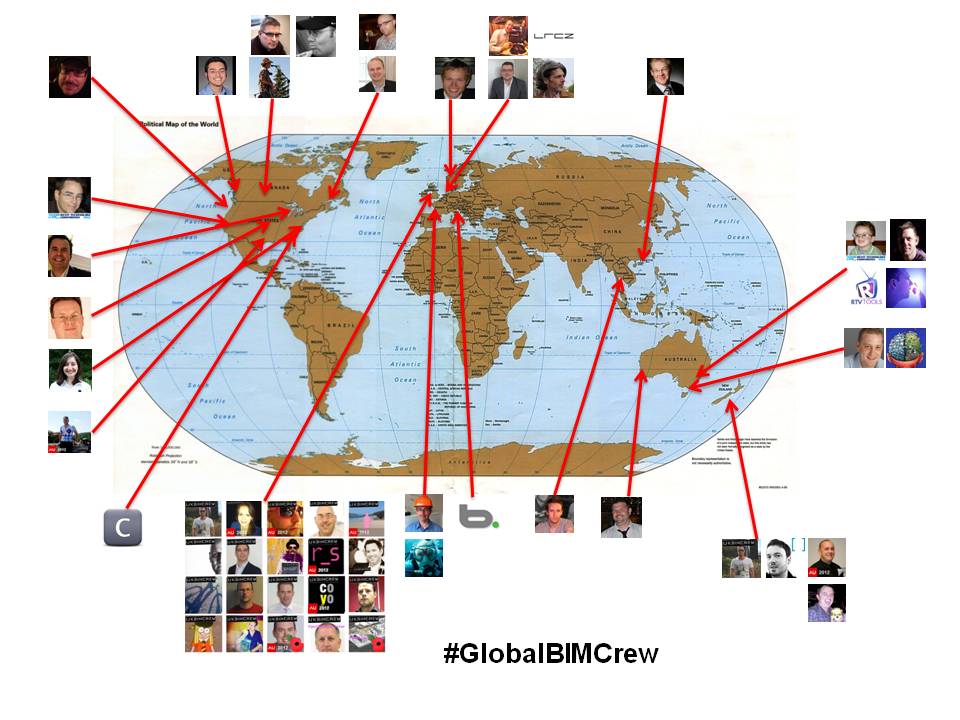 What’s a “hashtag”? For the uninitiated, people on Twitter tend to indicate trending topics by putting a “#” in front of a word or mashed-together phrase (i.e., #ukbimcrew). Twitter then makes that word or phrase clickable and shows you every tweet that includes it.

As people here in the UK started identifying that all these people on Twitter were talking about BIM, they began ending their posts with the hashtag, and that’s even become a “twibbon,” where people put the UK BIM Crew logo of sorts in their profile pictures.

Yes, it can all seem terribly silly to those who’ve never participated in the Twitter universe – one participant even created a URL shortener so that every link they share amongst each other begins with ukbim.co – but it has both created a community that can rely on one another in an industry where there’s still a lot of trial and error and significantly leveled the playing field.

One of the most active members of the UK BIM Crew is David Philp, head of BIM adoption for the UK BIM cabinet office. As in, the guy in charge of making sure that, by 2016, all centrally procured government contracts in the UK are level 2 BIM (what that means is another matter entirely…). In fact, when Philp, known on Twitter as @ThePhilpster, was looking to populate the group who would put together the laser scanning guide as part of the UK BIM Task Group, he turned to Twitter and found plenty of volunteers in no time.

“I just think it’s incredibly cool the way you have competitors sharing knowledge, good and bad experiences,” said McCarter. “There are rival architects who traditionally bid for the same types of work and they share their experiences, and how they’re implementing it … It really impresses me how open they are.”

And now, because of Twitter, that openness is extending across the globe. McCarter tells the story of how one Revit expert (Autodesk calls them Gunslingers) is traveling the world this year hooking up with Twitter friends at every stop to swap BIM knowledge.

“Apparently this guy is very good at what he does,” said McCarter. “He attracted the biggest crowd yet for the Glasgow Revit User Group meeting.” He had also never left the United States before in his life.

Of course, it’s about more than Twitter. It’s about how the Internet and social tools allow for groups of people to accomplish what has traditionally been the role of publishing houses and B2B conference organizers. A calendar of events? Go to bimdiary.com for that. Looking for how-to information? Just ask your Twitter followers and see what they say. Want to talk shop? Suggest #bimbeers.

“It’s really difficult to convey it to people who aren’t involved,” McCarter said. “Some people might say, ‘Why would you want to go out with a load of geeks who want to talk about this stuff?’ But it’s just that. It’s the attraction to talk about stuff that no one else would put up with.”

Are you part of the BIM one million?