Avvir's construction verification solution pushes the as-built to the BIM

The past few years have seen a fast-growing number of products that offer construction QC/QA by comparing as-built scans against the original BIM. So how does AVVIR, an automated construction verification company so new it made its first blog post less than a year ago, set itself apart?

You start by submitting their BIM to Avvir directly. For the next step, you have two options. One, you can meet with AVVIR to determine a scanning schedule and have Avvir scan your site as work progresses. Two, you can scan yourself as work progresses. Either way, as the scans come in, Avvir will continually compare the as-built against the BIM you supplied. 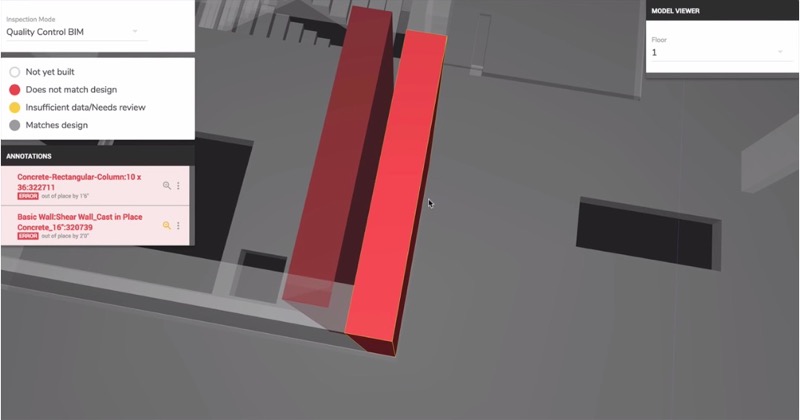 The software shows where the element is, and where it should be according to the BIM.

When you log in to view the results, the customer portal will display each deviated element twice–once in solid red to show where it should be built according to the BIM, and once in a translucent red to show where it was actually built. As you would hope, the user portal displays measurements to indicate how far out of tolerance each deviated element is.

Avvir also displays detailed information for each trade. The algorithm counts the number of elements on site that are connected to a trade and indicates percentage of those elements have been installed according to plan. It will also show you more granular data, like which elements have been built and which have not been built. If you upload a 4D BIM, Avvir can show you the actual progress of each trade against the schedule. From there, you can update the schedule as needed.

Holzer says that Avvir is all about closing the feedback loop in construction, which means that it does more than simply show you what’s off.

Pushing changes to the BIM

Let’s say you’re overseeing a job, and you find an element out of tolerance. You speak to the engineer and determine that the column needs to be moved. You have it moved and then re-scan the area. Now, the portal will display the column as green to indicate that the problem has been fixed. 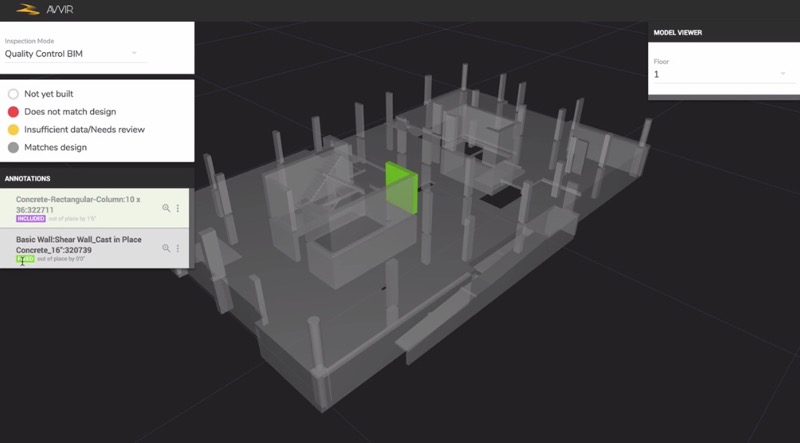 The green indicates an as-built element that has been corrected.

But, let’s say you speak to the engineer and she tells you that the deviation is not a problem. With two clicks of a mouse, you ca†tn push the real-world location of that column to the BIM. The value of this function is clear: It offers a way to keep the BIM up-to-date throughout the building process and ensure that it reflects the real-world conditions of the structure. Any facility manager will appreciate having an accurate model of their asset, Holzer says, for that moment when they need “quickly locate a shutoff valve or electrical panel when there is a leak or system failure.”

Avvir is hoping this will go a long way toward setting its product apart on the market.

The human in the loop

Given the extreme hype surrounding AI and machine learning in the AEC space, I asked—does Avvir have any plans to develop a workflow where the software pushes necessary changes automatically?

Holzer was circumspect about the possibility. “I can definitely foresee a time when software is making decisions about whether to incorporate changes from the scan automatically,” he said, “but it will come incrementally. First, humans will set rules about what permissions the AI has and software will gradually take on more responsibility. To remove humans completely will take something close to a general AI, which, from what we’ve seen, is still a ways off.” 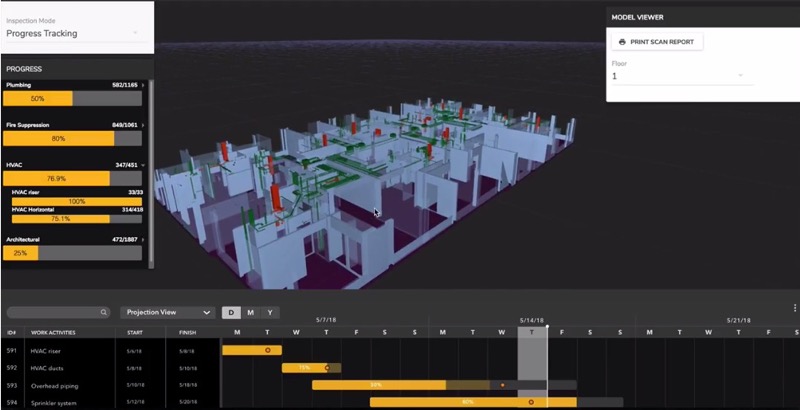 Avvir can show you how work is progressing against the set schedule.

Why would Avvir scan for you?

When I asked Holzer why Avvir offers scanning services in addition to its software, he argued that it goes a long way toward reducing the complexity for its customers. “The biggest value of this is having a single source of failure. If something goes wrong, we know it’s an issue on our end and we can take measures to address it. That makes a number of our clients more comfortable.”

He also said that it will allow customers to see the ROI of the workflow before investing in the expensive equipment needed to do it themselves. Once this ROI has been proven, and the whole industry accepts the value of the workflow, Avvir will stop providing scanning services. “As the progressive scanning ecosystem matures, GCs and third-party scan providers will fill the gap. They are already on site and won’t have the mobilization costs a company like ours would.”

AVVIR is already working on a few updates. Soon, Holzer says, the software will “be able to provide a semantic tag explaining what kind of deviation or error” it has detected. In other words, AVVIR will interpret the deviation and tell you directly, for instance, when a column has “undergone a translation or a rotation in space, or if one face is simply out of plumb.” A more bold plan: In the near future AVVIR hopes to be able to offer “completely automated QA/QC of a building that incorporates other sensing modalities beyond laser scanning.”

For more information about AVVIR’s product—including pricing and options—check out the company’s website and contact them directly.