If you haven’t been living under a rock for the past few years, you’ve likely heard the buzz about virtual reality and its sibling technology, mixed reality. Also known as augmented reality (depending on whom you ask), the technology uses a display to lay digital information over your view of the real world. Videos abound that show architects using mixed-reality devices like Microsoft’s HoloLens to handle digital building models on a tabletop as if they were playing with a bunch of Legos.

It’s impressive, but I had questions about how firms are using mixed-reality tech in the real world, on actual projects. To get answers, I caught up with Jim Dray, Vice President, Business Technology Solutions at AECOM, the AEC firm sitting at #1 on ENR’s top 500 for 2015. Dray’s job is to track innovative technologies and their applications within the AEC business, so he was an ideal guide to the ways that AECOM is–and isn’t–using mixed-reality technology on actual projects. We covered topics including the tangible benefits AECOM is seeing, their experiences working in Trimble’s mixed-reality pilot program, and the challenges that that mixed-reality technology still presents.

If you want to see how mixed-reality is making its way into real-world AEC projects at one of the world’s largest firms, read on.

(Note: This interview has been edited for length and clarity.)

Sean Higgins: Once you were convinced that mixed reality technology was mature enough for commercial application, how did you start using it and what kind of benefits have you seen? 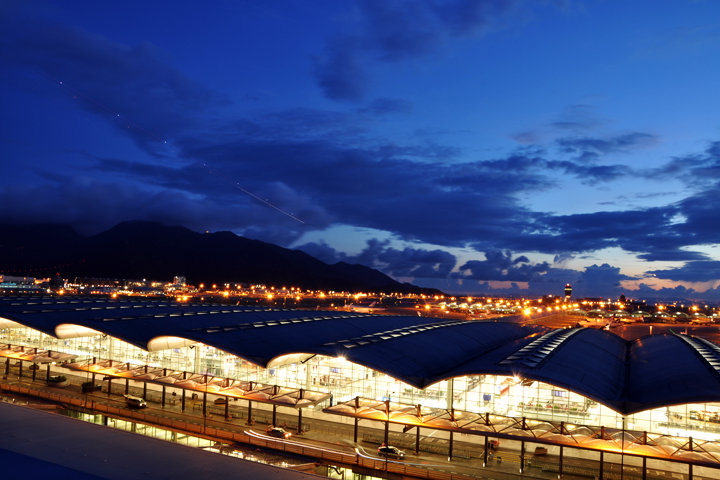 The Hong Kong airport at night. By Toyotaboy95 at English Wikipedia, CC BY-SA 3.0,

Jim Dray: At AECOM, we constantly have this problem where we’re doing something really complicated that involves experts around the world collaborating. For example, the Hong Kong airport is one of these amazing swoopy new designs, and a gigantic, very sensitive building. For a project like that, we might have 700 staff in four different continents working on it. You can imagine: There are the conceptual architects, the mechanical guys, and all the other disciplines. For a building of that stature, we need all the best no matter where they are.

What we’re able to do with a mixed-reality approach is actually experiment with design and structural support options. You could have a structural engineer in London advising on different scenarios with an architect in Hong Kong or Dubai—and making getting a lot more headway than they normally would. Normally they would give up and say, “Well, I guess I have to get on a plane.”

I’ve heard about safety applications for mixed reality, too. Are you seeing that?

We’re seeing a lot of potential applications in health and safety. Our oil & gas clients, for example, are seeing the applications of these kinds of technologies because it enables their staff to get a kind of visceral test of, “Is this construction site safe?”

It does this in a way that is much more powerful than just showing someone a video or running some PowerPoint slides by them. And that’s a huge-stakes problem in today’s construction and manufacturing world. 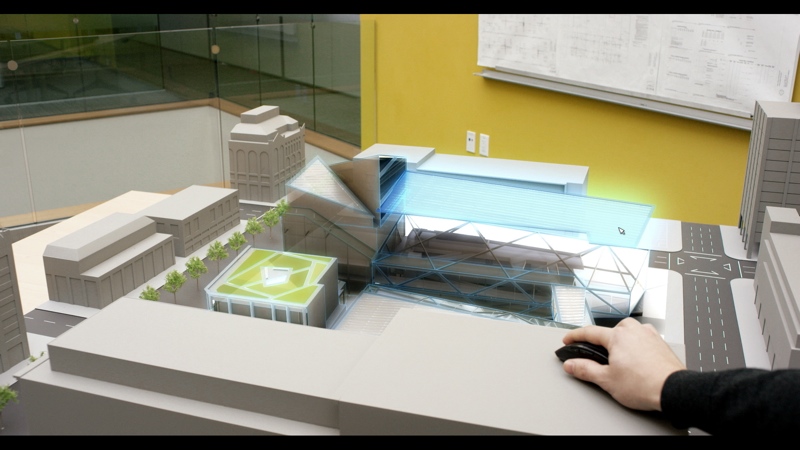 A mixed-reality view of a 3D model through the Microsoft HoloLens. Courtesy of Trimble.

Have you measured any quantitative results yet?

We haven’t had the chance to do disciplined measurement yet, but let me give you an example.

We have a project to design a hospital in Saudi Arabia. The client said, “we want the design in six months,” which is unheard of in this situation. I think that when we get through the piloting of this technology, we’re going to be able to show that its possible to use it to cut the elapsed time of a complex design project like that quite significantly, and that’s going to have a quantitative payback. I don’t have my finger on that yet, but I’d be surprised if we don’t find it.

What sorts of challenges has mixed-reality technology presented during your time in Trimble’s pilot program? I was talking to Aviad Almagor from Trimble about commercial mixed reality, and he said that some firms are frustrated by the technology because it’s still being developed for commercial use.

First, the BIM models that we have often require more pre-processing than you would want so that they’re usable with these new tools. You dream that you could double-click on a BIM model and interact with it with a headset on. Right now, that’s too hard. It’s too much intermediate work to clean up the model and simplify it in order for the headset to use it. It’s getting better every day, but it’s still too complicated.

Second, the hardware bit is a moving target. People are announcing products every day, and not just hardware but software. It’s fast moving.

Third, there’s a natural process going on now of turning what everybody agrees is neat into commercial reality. You have to make money, you have to have clients who are willing to share in the experiment, and so forth. It’s not a bad thing, it’s just the nature of incubating a new technology.

How long do you imagine it will be before AECOM uses mixed reality for anything beyond a pilot project? 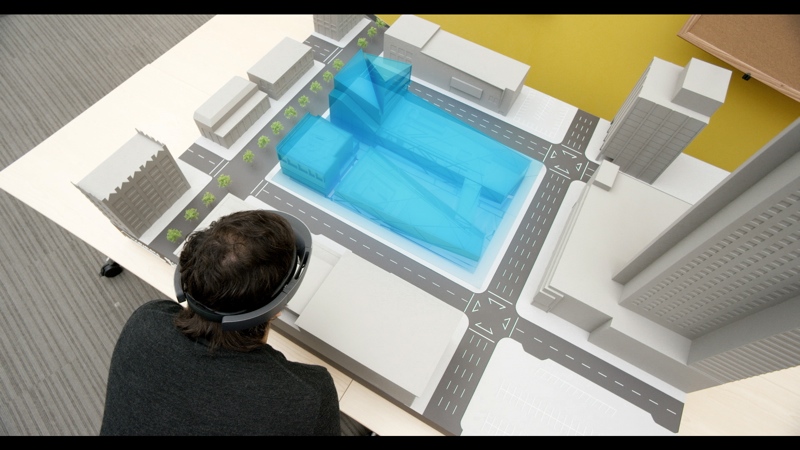 Mixed reality in the design phase of a building project. Courtesy of Trimble.

On the other hand, we’re not really using it at scale. It’s kind of a “spice” on a few key projects, but no major project has yet taken the leap and said “This is going to be our primary tool for collaboration about design, or collaboration about construction during this job.” I think that will take another year or so of solidifying the technology, and finishing this pilot and learning from it, and solidifying everything. I’m also working organizationally to grow and nurture the skills within AECOM.

I would say we’re about a year off from usage at scale.

Given what you say you do on a day-to-day to basis, is there some kind of dream technology that you have related to the use of 3D data? Is mixed-reality it?

I have spent a lot of time in the construction side of the business. On that side, there are all sorts of things that happen that are really inefficient, honestly. You’ve got guys going out into the field doing a punch list inspection of a partially completed construction project, and they’re either bringing a clipboard, or if you’re lucky, they’re bringing an iPad. But the iPads are not all that helpful.

I don’t care if its headsets, or implanted chips in the helmets of construction guys. I want our guys to be able to go to a construction site, look at the 13th floor, and say, “oh yeah, that’s where the vent pipe goes and it needs to be moved over six inches,” and not have to file a form about it, not have to worry about the fact that they’re interacting with 3D data.

It doesn’t feel like you’re doing something incredibly high tech, its just helps you with your work. That’s my dream.

I think I understand–The technology just disappears and makes the job easier to do.

Everything You Need to Know about Commercial Uses of Mixed Reality