A new report from Dodge Data & Analytics breaks down how digital transformation is causing significant changes in the construction industry right now.

One section of the report, “Digital Transformation of the Design and Construction Industry,” describes the growing use of BIM and related emerging technologies by construction and design companies — as well as how far these businesses are in their digital transformations.

The report finds that BIM users tend to be ahead of the curve technologically compared to non-users — and that BIM use is a strong predictor of whether or not an organization has adopted new digital construction and design tools. Organizations that self-report “high BIM intensity” — defined as employing BIM tech for at least 75% of projects — are also more likely to have adopted emerging construction technologies.

Only 3% of all BIM users and just 1% of high-intensity BIM users reported that they had not started their digital transformation journey yet, for example, compared to 18% of non-BIM users. 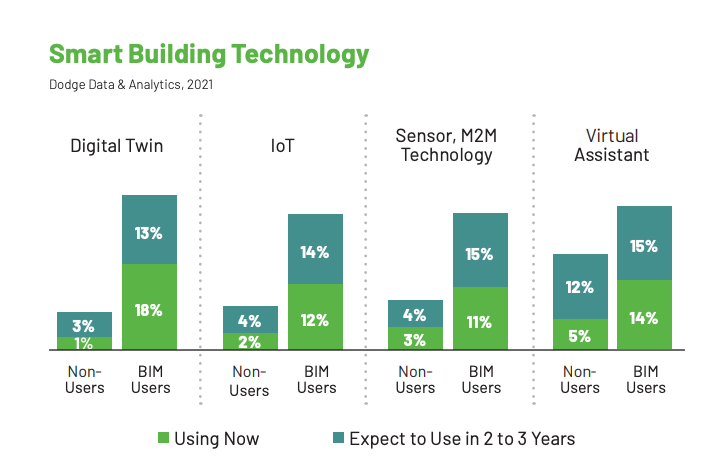 High BIM intensity organizations were also the most likely among both users and non-users to report their organization was “approaching the goal” or had “already achieved the goal” of digital transformation.

How BIM Is Related to the Use of Emerging Technologies 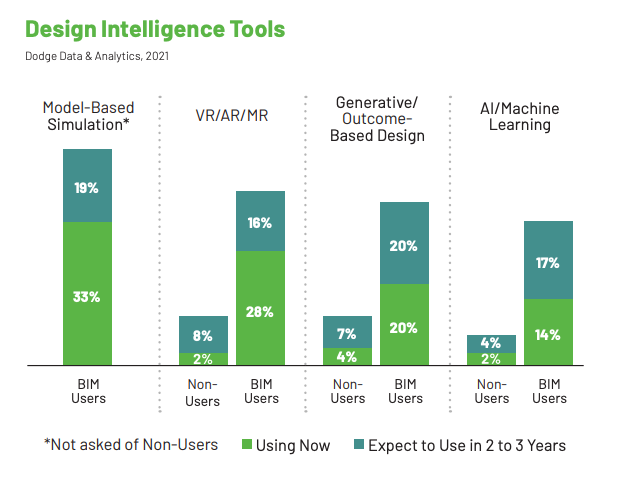 The study’s authors predict that because non-users consistently lag behind users in terms of technology adoption, existing gaps in use are likely to expand in the future.

Trends in Digital Solution Use in Construction

The survey also tells us which tools construction companies are adopting right now and which tools continue to lag behind, even among businesses investing heavily in digital transformation.

Of all tech considered to be an emerging technology by Dodge, cloud computing was the most widely adopted among both BIM users and non-users. The second most-adopted technology was reality capture among non-users and model-based simulation among users.

There are also certain technologies that have attracted very few non-BIM users, like design for manufacturing and assembly (DFMA), with 7% adoption among non-users, and digital twins, with just 4% adoption. 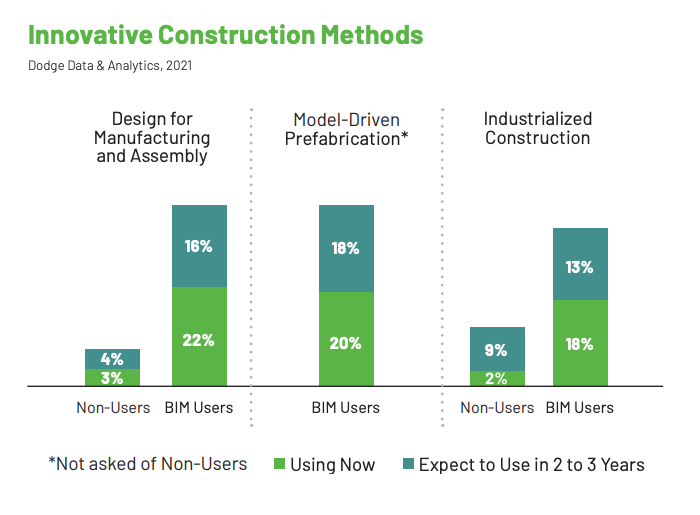 In general, technologies that work best when used alongside other digital solutions — like IoT, DFMA, and digital twins — were less likely to be adopted by organizations that hadn’t yet invested in BIM.

Rose Morrison is the managing editor of Renovated with over five years experience writing in the industry. She has a passion for covering topics in sustainability and diversity in the construction industry. For more by Rose follow her on Twitter.