3D laser scanning was recently selected as the #1 top ROI AEC Tech strategies in Building Design + Construction’s 2020 Technology and Innovation study, and 51% of respondents said they were using some kind of 3D laser scanning on many of their projects, and nearly two thirds use 3D laser scanners on at least some projects. But hidden within that data is an inherent question – is the construction industry using the right scanning technology to get that ROI?

Handheld scanners are built for usability, portability, and speed, and utilize Simultaneous Location and Mapping (SLAM) lidar to scan while being held and walked around a jobsite. There are some clear benefits that handheld scanning can bring to construction that can push the ROI of 3D scanning even higher.

1. You can scan as fast as you can walk

Traditional tripod-based scanners require a stop-and-start workflow that involves alternating periods of setup, scanning, takedown, and transport to the next scanning position. In addition to being tedious, the time that it takes in between each scan point is time that could be spent doing other work on a jobsite.

Rather than spending a majority of the time not actually scanning, handheld SLAM scanners allow workers to scan continuously as they walk. Walking while you scan is an obvious time saver, but it can even provide a less tedious and more comfortable scanning task, making it something that employees want to do, rather than dread to do.

nmcn, a general contractor based in the United Kingdom recently performed a head-to-head test to demonstrate whether handheld lidar could compete with traditional terrestrial scanners. The area to be scanned was a complex of buildings that was 57 meters in width.

Two employees first scanned the area with tripod-based scanners and laser distance meters, and completed the scan in 32 field hours. One employee then took a handheld lidar to the same area, and completed the scan in only 4 field hours. The workflow with the handheld lidar was eight times faster, and also used one fewer employee. In the end, when costs were compared, the handheld scanner also came out as 10 times less expensive.

Implementing handheld lidar scanning was transformative for nmcn’s digital transformation – to get more information, you can watch the webinar archive on SPAR 3D.

3. Grab photos and point clouds together

Some handheld lidar scanners include a build-in camera to simultaneously capture color imagery while a scan is taking place. This saves the step of separately capturing imagery with an external camera, and does not require extra time to capture.

The end result of a scam is a colorized point cloud – a merging of the lidar points and color image. The images are also available to view on your own, to assist in identifying and modelin

g elements from the capture, or simply as a quick way to look back at a specific location.

4. Get into smaller and funkier spaces 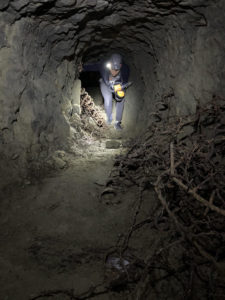 On a construction site, it is unlikely that the jobsite will always be wide open and have uncomplicated spaces that need to be captured. What is more likely is that contractors find they are accessing complex structures, tight spaces, or other geometry that would prohibit or inhibit the use of traditional scanning rigs. Rather than skipping those complex and tiny spaces, handheld scanning allows for a more complete capture of a jobsite.

With a handheld scanner, the footprint is much smaller, which enables it to fit where others cannot. Being handheld means that avoiding obstacles can be done at a close up scale rather than across a room, leading to a more complete scan with less tedious repositioning. The handheld scanner’s long pole can even be used to look into places where a full-sized person might not be able to squeeze through.

While drones are becoming more useful in construction, they are not always the best fit for certain construction sites. While drones are great for outdoor overviews, it can still be difficult to successfully and safely deploy them indoors. Combined with ever-changing drone regulations, using drones in construction is often not a straightforward endeavor. Adding a handheld scanner to your toolset, however, can more than make up for the places that drones cannot go, and no one needs approval from the FAA.

Construction jobsites are active, with people moving from area to area based on what tasks are on the docket for the day. Waiting for a particular section to become empty to scan or scanning after hours (with employees accruing overtime) can be costly. Even asking a group of people to vacate an area is disruptive, and can slow down progress.

Handheld scanners, however, can work around people and still capture good data. As you scan, if people are relatively still for a minute or two as you walk by, the device will still capture the complete scene.

7. Get anyone up-to-speed with minimal training

Performing a scan with a handheld scanner has a much shallower learning curve than a traditional scanner, and requires far less training and expertise to operate. This can allow the task of scanning a jobsite to be distributed to available workers, rather than relegated to a single expert on-site.

A basic workflow involves turning on the scanner, putting into a holster or harness, and then walking around your asset or jobsite. The attached tablet display can be used to stop the scan once the route has been completed, and then the scanner will process the data. Attached displays even provide feedback as the scan is being captured, so anyone using the scanner is able to capture professional scans.