For the oil and gas industry, corrosion is one of the leading causes of pipeline leaks, ruptures, spills, and explosions.

In 2009, just before New Year’s Eve, a pipeline leak in Aston, Pa., spilled nearly 400 barrels of gasoline through a residential neighborhood, resulting in evacuations and costing $3 million to clean it up. Authorities determined the cause to be corrosion-fatigue cracking, likely caused by a welding defect in the pipeline.

The massive, deadly explosion at a chemical plant in Louisiana this past June was blamed on propylene, the chemical that caught fire, leaking from a corroded pipe.

More than 25 percent of leak incidents are attributable to pipeline corrosion, according to a federal study on the costs and control of corrosion in the U.S., which estimates annual costs of corrosion at about $276 billion.

The oxidization of steel pipelines leads to gradual loss of wall thickness and a drop in pipe strength, which can result in leakage or rupture depending on the pressure stress in the pipeline.

Oil and gas operators will use in-line inspection (ILI) tools such as magnetic-flux leakage (MFL) technology to assess the condition of pipeline walls. Also known as “smart pigging,” MFL tools use a nondestructive electromagnetic technique to scan the full circumference and length of the pipeline for damage by corrosion and other causes.

The challenge for oil and gas pipeline operators and NDT (non-destructive testing) service companies is verifying the ILI tool is calibrated and in spec and truly measuring for actual corrosion and making accurate burst pressure predictions.

Validating the measurements of ILI tools means correlating the ILI data with in-ditch measurement data from pit gauges, which are inserted into the pipeline and conveyed along with the flow of oil or gas while scanning for wall defects.

Problem is, correlating corrosion measurements from both tools can still lead to errors. That can mean a threat to public safety if a pipeline’s condition is worse than measured or higher expenses for unnecessarily digging up pipelines that don’t need to be repaired.

To help mitigate these adverse outcomes, portable 3D measurement technology and engineering firm, Creaform, has developed a “virtual pit gauge” with a scanning speed of up to 10 times faster than pit gauges.

The Levis, Quebec-based company’s recently released v2.1 Pipecheck software for pipeline corrosion and mechanical damage assessment. The system performs ILI correlation with data – corrosion and dent features – acquired by its Handyscan 3D scanner with the ones identified by the ILI tool.

“The idea to develop an ILI correlation functionality emerged from our will to find a solution to the dilemma that pipeline operators face on an ongoing basis,” said Creaform Product Manager Jérôme-Alexandre Lavoie. “They have to do what is required to guarantee public safety [by maintaining the pipeline’s integrity], but they also need to weigh in the economic impact of digging areas where no repairs are needed after all.”

Creaform’s solution for the prevention, monitoring, detection, and mitigation of pipeline corrosion is comprised of a Handyscan 3D laser scanner and the Pipecheck data acquisition/analysis software and costs between $75,000-$100,000.

Here’s how it works.

First, the Handyscan scan’s the pipeline’s surface and records the profile data. The Handyscan uses TRUaccuracy, Creaform’s high-accuracy measurement technology behind all its 3D optical measurement products, which makes it impervious to vibrations. The scanner can also detect a change in thickness of the material’s viscosity, typically a red flag for corrosion.

Second, a custom algorithm is applied to rebuild a 3D model of the original pipe surface, independent of any pipe distortion such as bends or ovals.

Operators can then compare, in real time, the rebuilt pipe surface with the corroded surface to calculate corrosion pit depth/remaining pipe wall thickness. 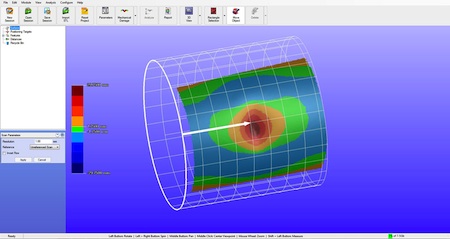 v2.1 Pipecheck also extends previous capabilities to now compare burst pressure and manage depths measurements near welds, valves, and other equipment attached to the pipe such as compressor units and pump stations.

“With this release, we continue to target the [oil & gas]market, but the new functionalities will be particularly interesting for refineries, as they make pipeline inspection possible despite the presence of complex elements such as valves or welds,” said Lavoie.

If Petroleos Mexicanos (Pemex), Mexico’s state-owned oil monopoly, is the backbone of Mexico’s economy, then its oil and gas pipelines are the veins and arteries.

So, when Creaform had the fortuitous opportunity to join a trade delegation to Mexico earlier this year, Quebec officials setting up the mission sent an email to Pemex asking about the integrity of their pipelines and whether there was interest in meeting Creaform.

Pemex has a bit of an issue regarding its pipelines – thieves keep tapping into them and stealing fuel, costing it up to $5 billion.

In just the first six months of 2013, Pemex detected nearly 1,500 illegal fuel taps, estimating the thieves stole about 2.7 million barrels of fuel, more than one day of its annual oil output, and about double the number of illegal taps discovered in the same period in 2012.

Worst of all, these illegal taps frequently result in explosions or fires, such as a recent pipeline explosion that injured seven people on the outskirts of Mexico City. One attempted theft caused an explosion that killed 29 people in December 2010.

After arriving in Mexico for the trade mission, Creaform executives were sitting in on a video conference call with Pemex officials representing 17 of the oil giant’s pipeline locations.

“We blew them away,” Creaform’s Louis-Étienne Bouchard told SPAR. “They said what usually takes them three to four hours to complete, we did it in five minutes. It’s kind of like introducing a car to a farmer with a horse. Now, we have six months of meetings.”

Creaform said sales of Handyscan 3D scanners, described as the only portable, metrology-grade scanners on the market, increased 32 percent in the first half of 2013, compared to the same period last year.