Update: Garmin has purchased PulsedLight and re-released the LiDAR Lite.

PulsedLight didn’t set out to create an inexpensive product.  The idea behind the PulsedLight sensor, CEO and co-founder Dennis Corey told SPAR, “was to find an area in the patent landscape where there was an opportunity to come up with a technology that was innovative and didn’t have any connections with any existing intellectual property. And it turned out there were not a lot of openings.”

The result was the market’s lowest-cost LiDAR units, the LiDAR-Lite. It totals only $89 for a single 2D sensor, and that’s just the manufacturer suggested retail–the street price is closer to $75.

SPAR spoke with Corey about how the technology works, how an inexpensive LiDAR has led to some creative uses, and how they plan to adapt their low-cost technology for professional applications, even multi-pixel 3D scanning. 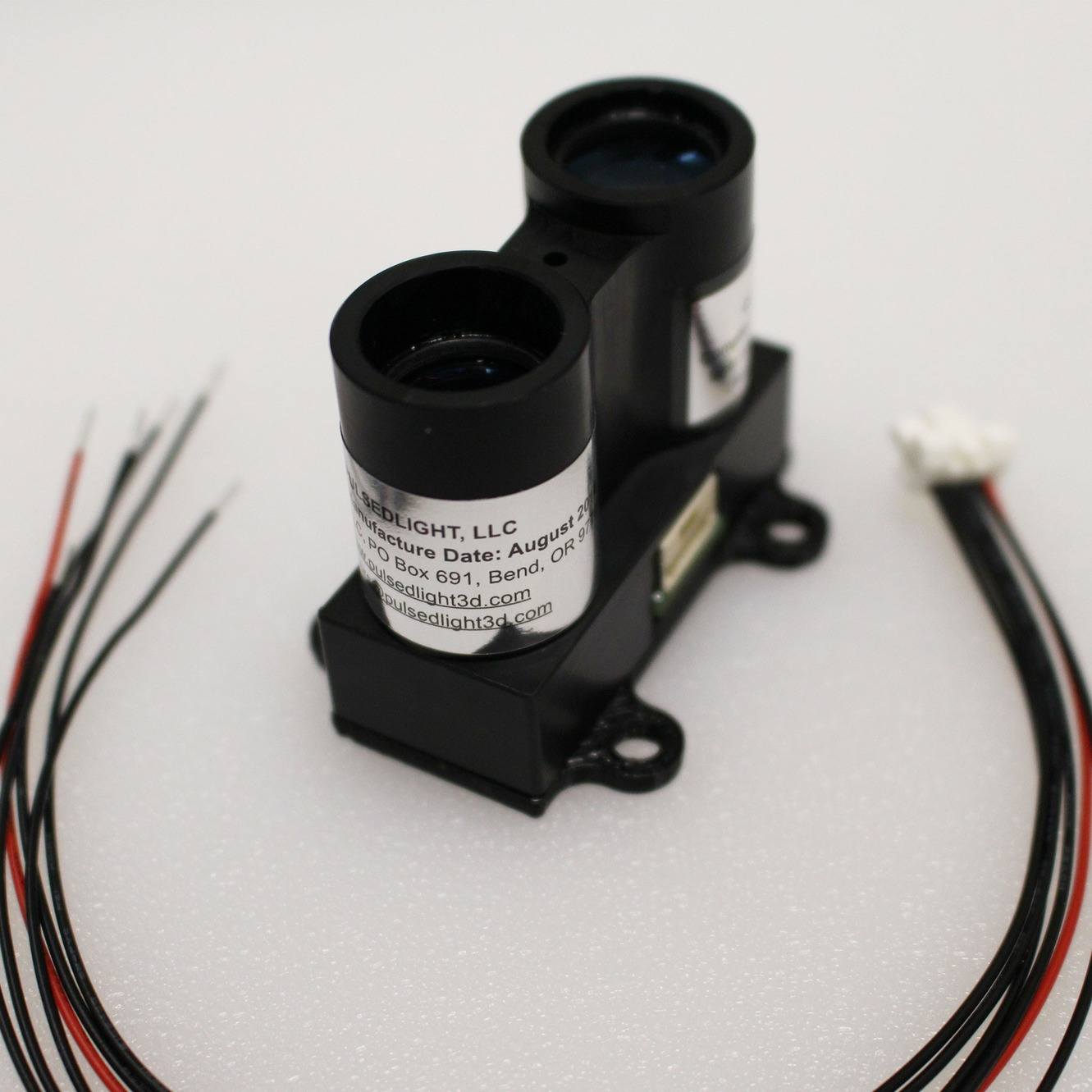 How did they do that?
As Corey describes the technology behind their sensors, they are “sending out a modulated ‘pulse train’ and looking for that pulse train’s unique signature in the return signal. This is basically how radar works–they send out a modulated radio frequency pulse and look for that return, using the delay between the transmit and receive signals to come up with a distance measurement.”

The technology developed by PulsedLight doesn’t measure only by timing a delay. It also uses a signature-matching technique called signal correlation to compare the original signal against the returned signal. It estimates the delay electronically by sliding these two signals over one another to find the best match and then translates that information into distance based on the speed of light. (If you need a more detailed explanation, look here.)

Corey explained that a positive effect of this technology is that every part of this signal processing can be performed in a single microchip. That means PulsedLight devices don’t need to use extra hardware components to performsignal processing, like the delicate (and expensive) clocks used in many time-of-flight systems.

The correlation process also works efficiently enough to process low-level signals from low-energy power sources. LiDAR-Lite, for instance, uses less expensive optical components than the average competing device. It uses a pin diode detector ($0.30) where many devices uses an avalanche photo diode detector ($15-$20), and their signal processing technology allows the use of a much less powerful laser.

Simply put, the technology allows them to produce a LiDAR device at an impressive price point.

What It Can Do
I asked Corey the question on everyone’s mind: How precise is this LiDAR-Lite, anyway? “We have centimeter-level resolution and advertise accuracy of 5% over the range of the device,” he said, “but what we’re really seeing is accuracy in the half percent range in our practical testing.”

That’s likely not good enough for construction or surveying applications, Corey admits, “but for a lot of the applications we’re involved with, that’s well within the realm of what they want to do.” This includes applications like UAV altitude control or simple 2D room mapping.

But those uses are only the start. Since the device is inexpensive enough to try things you would never dare to try with a pricier unit, the LiDAR-Lite is becoming popular with makers and DIY types. Some people have already put it to extremely creative uses by taping it to a stick to measure fuel levels in an underground tank and attaching it to their bikes as an early warning system. Some artsy types have even used it to make a laser air harp that sounds like something ELO would have used.

Now anyone with $90 and a cheap computer can start to experiment with LiDAR devices. And who knows how they’ll start to use it.

PulsedLight seems to actively court these kinds of users. Corey told me that the company made a conscious effort in the beginning to make the device as accessibly to as many people as possible. “I’ve always said, I just want to get this product in people’s hands in a simple form and see what they do with it, and see what kind of applications they come up with.”

What’s Next? Low-Cost Professional Scanners.
While it’s true that this is the first LiDAR appropriate for the hobbyist, the price and versatility of scanner has even allowed it to make some inroads with the more demanding professional users. Though no one at PulsedLight expected anyone to mount the 2D LiDAR-Lite on a spinner and use it to make point clouds, that’s exactly what’s started to happen.

As a result, the company is planning to build higher-speed technology for certain professional applications, including a 2D-scanner with a rotating base. The company has already opened pre-orders for the LiDAR-Lite v2, which offers 500 readings per second over the original version’s 100 readings per second. That should make the unit more enticing to people who want to use the device for 3D-imaging or machine vision applications–and it’s only $30 or so more expensive than its predecessor. Future plans include a device that scans at rates up to 2khz.

As if that’s not enough, PulsedLight has plans for a multiple-channel array. Corey told me that “manufacturing costs are something on the order of $1 a channel to expand this into a multi-beam system. So the cost to scale into the multi-pixel applications is low. And we do have plans to do this.”

A low-cost multi-channel system that would work like a flash LiDAR would certainly turn a lot of heads. 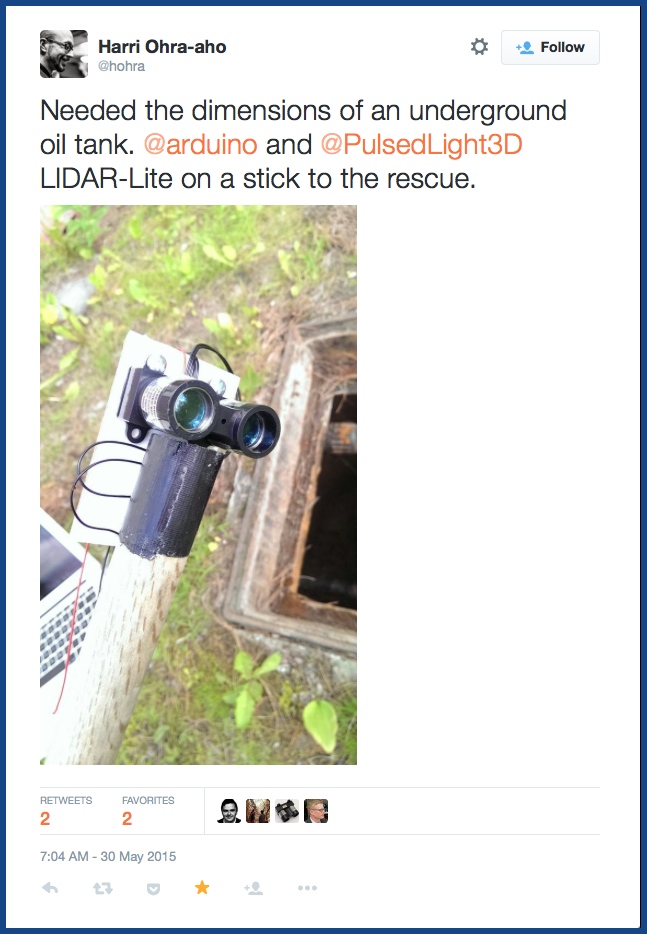 A Geiger-Mode LiDAR Array for UAVs and Autonomous Cars