Racurs was founded by a group of researchers from the Russian Academy of Sciences in 1993 together with the launch of the PHOTOMOD photogrammetric system. PHOTOMOD is a digital photogrammetric system for extracting geometrically accurate spatial information from almost all commercially available types of imagery. It is mainly used for processing satellite and aerial images, aerial triangulation and block adjustment, 3D feature extraction, creating digital maps and 3D models and more. The current version of the system can be used to generate DEMs, TINs, contours lines, vectors, seamless orthomosaic, digital maps, DSM (Digital Surface Models), true orthos and 3D-models. These output data files can in turn be used as inputs for different GIS products.

PHOTOMOD is now used by specialists in more than 80 countries around the world in a total of 900 different organizations and on 10,000 workspaces. The company has 50 employees and 60 partners in 45 countries. Apart from their photogrammetric system, the company offers photogrammetric production services using airborne and satellite imagery, distributes remote sensing data in Russia and commonwealth independent state (CIS) countries and performs R&D in the remote sensing field. The company is also a sustaining member of ISPRS since 1998.

During its latest Scientific and Technical User Conference, Racurs’ Managing Director Victor Adrov looked back on how the company came into being and expanded its activities outside of Russia by selling more licenses of its PHOTOMOD system abroad through a growing dealer network. This also required multi-language versions of the software, that is now available in five different languages. In terms of data, the photogrammetry market introduced more image data formats, while files have become larger and larger over the years.

PHOTOMOD consists now of a set of ten different modules, in addition to a main operating shell. Each module performs specific operations during a certain stage of processing and users are free to install only the modules they need. The current version is 6.3, but features of the 6.4 version were demoed during the event, such as creating 3D models from satellite stereopairs and support for various new sensors.

The PHOTOMOD system is now available as a standalone digital photographic workstation using one PC or a distributed network environment. This second option is used today by many clients working with interconnected photogrammetric systems, or using cloud-based solutions or file clusters. Complimentary workplaces are available to use it with systems from third-party vendors.

The software has changed over the years, and so did hardware: Today, 3D mice, VR helmets and special monitors for stereo viewing are common in the photogrammetry field.

These days, PHOTOMOD is all about workflow automation, or generating a final photogrammetric product through “button-pushing” comparable to how a desktop GIS software product works.

However, today’s and tomorrow’s photogrammetric software users need to be trained thoroughly so they’re able to find the right buttons and know everything about the applied photogrammetric software, data, and algorithms. Racur’s process of change corresponds to the challenges many software companies are facing: It is offering more functionality, while at the same time simplifying workflows and graphic user interfaces.

PHOTOMOD started as a desktop application, but can now also be accessed through the cloud. This means that users no longer have to pay the licensing costs, but instead pay for the time they use the software, based on an hourly fee. One such platform is GeoCloud, that gives remote access to various geospatial software products. New PHOTOMOD users can follow a 5-10 day training period at the client’s site, the Racurs office in Moscow or through Skype. 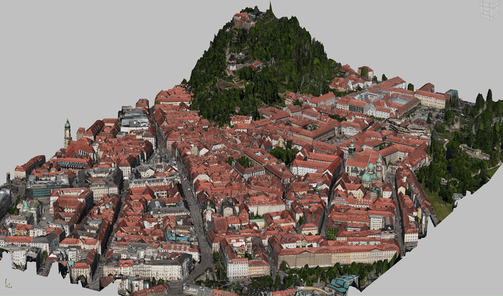 New applications are changing the discipline of photogrammetry. Applications such as self-driving cars, for instance, require their own models of the environment. These can be seen as an additional deliverable to the already popular 3D models that photogrammetrists are familiar with, now with different end users and specific market requirements.

Another great game changer is the emergence of 3D GIS, which will drive the demand for more 3D city models.

However, the photogrammetric industry is driven less by applications than by the evolution of the technology. That includes the sensors that are used for acquiring the data used for producing digital realities as well as the platforms (hardware capabilities, more efficient algorithms).

One could speak of “smart photogrammetry” (in line with the “smart city”), a term that refers to fully automated creation of products such as orthomosaics, terrain models, and 3D models, for instance in 3D GIS applications. In an era where more and more data is created, photogrammetry as a discipline awaits many new opportunities and challenges.

nFrames SURE combines photogrammetry and lidar for large-scale data production

Why AR and VR need photogrammetry