This post is part 2 of my review of PointCab Version 3.5. Part 1, which covers the basics and 2D extraction tools is available here.

Another couple of weeks have taught me several things. Most importantly, don’t post part 1 of a two-part article until you’ve written part 2. (I apologize for the delay. In my defense, I do have a day job!)

Since part 1, I have been able to put in some more time testing PointCab and I can say, though the application certainly offers a lot of modules for data processing, not every module was as impressive as the 2D layout and vectorization modules that I detailed last time. However, there are still plenty of goodies to unpack. So, without further ado…

Let’s start with the least impressive, the Registration Module. I will admit that I did not spend a lot of time trying to find the best practices to make the Registration Module work as well as possible. Essentially, I took data that I had already collected, registered, and modeled, and simply ran it through PointCab instead of Cyclone or LaserControl for registration.

I had a few problems. Target acquisition seemed a bit off, and did not work very well for me. I also had some help with this (and must profusely thank Ariel Samuel-Lezama and Jeff Williams for their assistance!) and each of us had a similar experience. The Auto Find Targets Tool supplied a lot of false positives, and we had a few software crashes. In the end, we spent too much time manually picking target centroids.

We also realized that while there is an “Undo Vectorizer” command, there does not appear to be a general “Undo” command. Though the registration engine worked once we manually selected or checked every target, it took too long compared to other more common registration applications.

Another module tested was the Unfold Tool. This module worked exceedingly well. As the name implies, it unwraps cylindrical objects and places them on a single plane. Additionally, it shows deviation coloring (of “out-of-roundness”) that is completely customizable. Best of all, it is dead simple to use. Users draw a circle around the tank or tower, define the height and thickness desired and hit “Run.” The results are saved in the user-chosen formats and include a PDF report showing color mapping of deviation and error distribution. 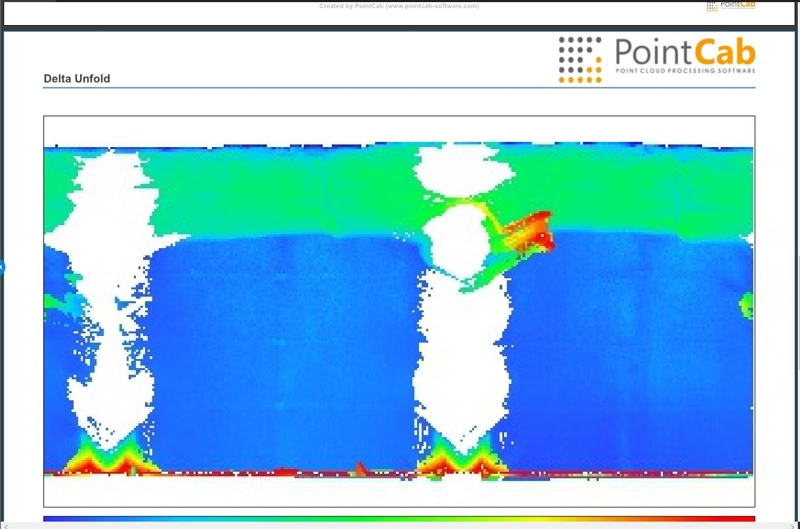 The Mesh tool was also evaluated with positive results. Let’s be clear: It’s not going to replace an advanced meshing tool like Geomagic, but for general topo work it performed well. You do need to clean the data prior to importing it, as the tool does not have a lot of editing options.

Don’t forget that you can import drone data as well, so this may prove an effective workflow for photogrammetry topo work as well.

Yet another tool is the Volume command. Users simply draw an outline on the pit or pile, set the elevation of the plane and you get an instant PDF of the volume results. This also works rather well, but its simplicity also limits the usability in some instances. The advantages are that you do not have to mesh the cloud to obtain volume information. On the downside, you can’t alter the plane to be anything other than level, so if you are getting the volume of a pile on un-level ground you are out of luck.

All in all, I found PointCab to be incredibly useful and very easy to use. I’m not sure that I’ve ever seen a point cloud processing application that arrived with such a large library of tutorial videos. It really flattens the learning curve that one would expect from such a powerful application.

There are a few places that could use some improvement, but it really comes down to how you intend to add it to your arsenal. It may not yet replace a major software platform but I found it to add enough efficiencies to my current workflow to make it a profitable addition to my toolbox.

Lastly, there are associated applications that I simply did not have time to test. There is a plugin available for using PointCab with ArchiCAD and there are a few PointCab Faro apps for importation and registration work. As I mentioned last week, an evaluation version can be downloaded from PointCab’s website for any interested parties.