[Editor’s note: Sam wrote an extremely comprehensive review of the BLK360. So comprehensive, in fact, that we’ve made the difficult decision to publish in two parts. Read on for part one covering the hardware. Part two will focus on the control apps and go up later this week.]

Few scanners were dropped with more fanfare than Leica’s BLK360, which debuted with a list price under $20k and a smaller size that had us wondering if the marketing shots had made liberal use of Photoshop. Leica made one available to me for the last few weeks and testing it out was one of the most daunting challenges I’ve had performing a hardware review.

It’s not because it’s a difficult piece to operate—after all, there’s only one button—but because the BLK360 is interoperable with various iOS apps and windows programs, which leaves you with a plethora of options when it comes to using the scanner. In the interest of fairness, I tried to perform the same actions using the three different control GUIs available to me, the BLK360 App, ReCap 360 App, and the Matterport Capture App. To be honest I simply did not have time to do so. Besides, as you’ll see, all apps are not created equal.

Let’s start with the hardware itself. [For a quick review of the BLK360’s specs, check SPAR’s original story on the device.] The BLK360 has a single button, a lighted ring at its base that is used for communication—and that’s about it. The light ring indicates the status of the current scan using colors and pulsing patterns that are easy to see and understand from a couple of hundred feet away. The unit produces its own Wi-Fi signal, to which users connect via iOS device or laptop. Overall, I like the design. 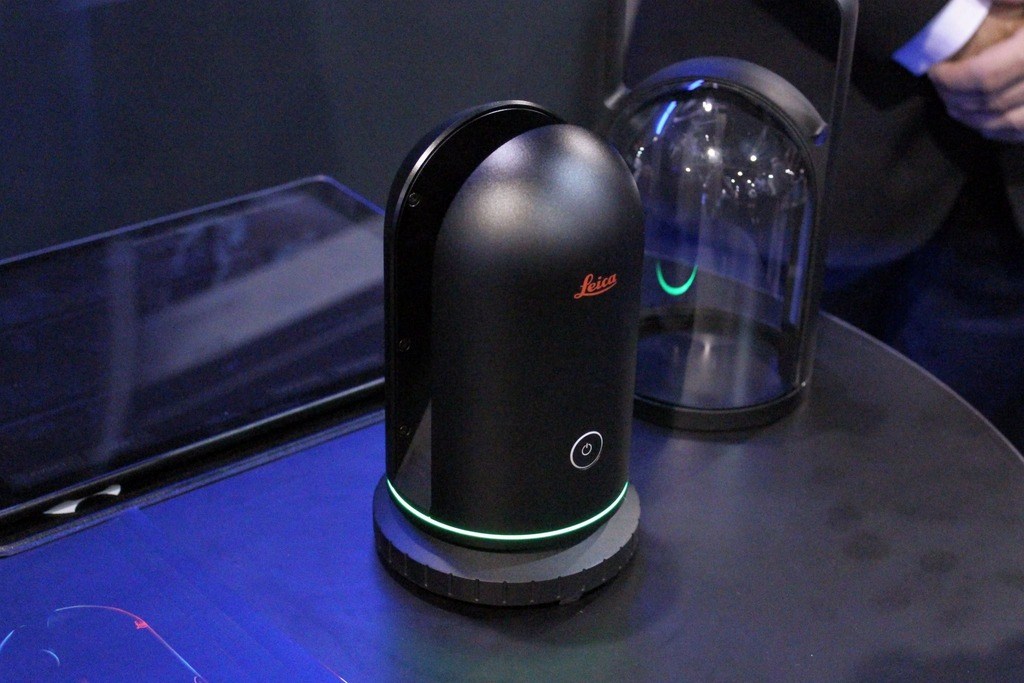 Power is supplied by a standard Leica total station battery (Leica GEB2123). Since it uses only one battery, Leica owners accustomed to “hotswapping” won’t be able to do that, but the boot time is so short that it’s not really an issue. The unit would not start a scan when the battery got below 15%, which is a bit conservative for my taste. However, the batteries charge quickly and are readily available in most survey shops, so I’d just pick up 3 or 4 and call it good for a day’s work.

Storage is quoted as “>100 setups,” which is a bit lacking in specificity. You can set the unit up to store all scans internally, or to erase them once you have transferred them over to your control app via Wi-Fi. I saved all scans to the unit’s internal memory as a precaution, but also so that I could test running the same data through Cyclone as a comparison. As a result I found myself having to delete scans on the fly as I kept running out of space. My first thought was to quit taking IR and/or RGB images. However, there was no way to disable those functions. I guess that’s the price you pay for simplicity. I think you’re better off just cleaning the hard drive before you go out each day as a matter of course.

Talking about this brings me to the only other hardware complaint I had: the lack of a physical connection port. I did find one in the battery compartment, but I was told this was for diagnostic use only. It’s a small annoyance, but it meant that I couldn’t dump the data to my workstations, as they do not have wireless cards.

This makes Wi-Fi the chokepoint when moving data (more on this later). I couldn’t find any published specs on the class of Wi-Fi used, but the same data moved much faster on USB3 than Wi-Fi as I transferred it all to my workstation.

The last new thing, hardware-wise, is the tripod and its new proprietary connector. The tripod is an impressive piece of structural origami, but it was a little too shaky for my comfort. As a result, I switched over to the Manfrotto 290 XTRA that I use for my Matterport Pro2. I also used a Manfrotto BeFree which worked fine given the BLK360’s 2.2lb (1Kg) weight.

However, that aforementioned proprietary connector is threaded for a camera (as in not a survey) tripod. I found myself ready to jack the unit up in the air about 15 feet while scanning a sculpture, only to realize that I had no way to adapt the scanner to a 5/8ths screw to connect it to every other piece of survey equipment that I had. While I’m sure that this can be easily overcome, I do think that it’s an indication of who Leica intended this unit for.

Normally, data quality is the deciding factor when it comes to assessing laser scanners. While that is still true for the BLK360, the multiple control interfaces change the game a bit.

Scanning directly to the unit via onboard controls and importing that data into Cyclone produced the best data. Used this way the BLK360 is comparable to most other scanners that use Leica’s Waveform Digitization (WFD), excepting that it’s less powerful than these other scanners. As a result, the intensity return seems a bit shifted with everything returning a lower intensity value than you get from, say, a P40.

Otherwise, data quality is generally good. At this price point, you can’t expect P40 quality—but I never had any issues. Admittedly, I was using it for interior work, and the stories you’ve probably read about the lack of return on dark colored surfaces are true, but this is forgivable since it was likely designed more for the scan-to-BIM crowd and not highway mapping.

Range noise was surprisingly low. I scanned a large clay model of a scorpion and was able to mesh the varied surface without first spending hours cleaning range noise. I never had any range issues while scanning indoors, and the “normal” scan resolution was fine for everything I did, excepting the Scorpion.

The data is treated differently by each control app. All of them seemed to perform some level of subsampling or filtering that reduced the point density, or otherwise affected the collected data. The app you use can dramatically change your perspective on the BLK360.

Look for the next part coming in a few days.