Up and Coming Array-Based Lidar for UAV Survey

Due to recent posts, I might be gaining a reputation for being critical about the value of the lidar survey systems being deployed on unmanned aerial vehicle (UAV) systems. One reason is that the lidar sensor is selected principally due to their price, and I believe this requires great compromises in both the cost budget for the project and the specifications of the client deliverable.

While I might be critical of the automotive laser scanning sensors that are now being applied to survey, I can’t criticize the efforts of the UAV industry itself, which is beginning to move from repurposing towards innovative new sensors that comply with the realities UAV operations. It is these types of 3D sensing technologies that I would like to make the subject of this post.

Last week, I attended AUVSI’s XPonential event in Dallas. Among the technologies at this wide-reaching event, which included everything from UAV platforms and emergency parachutes through to an exorbitant range of sensors and services, I would like to focus on the development of three types of lidar sensor that are yet to be widely seen in the traditional survey and mapping community. 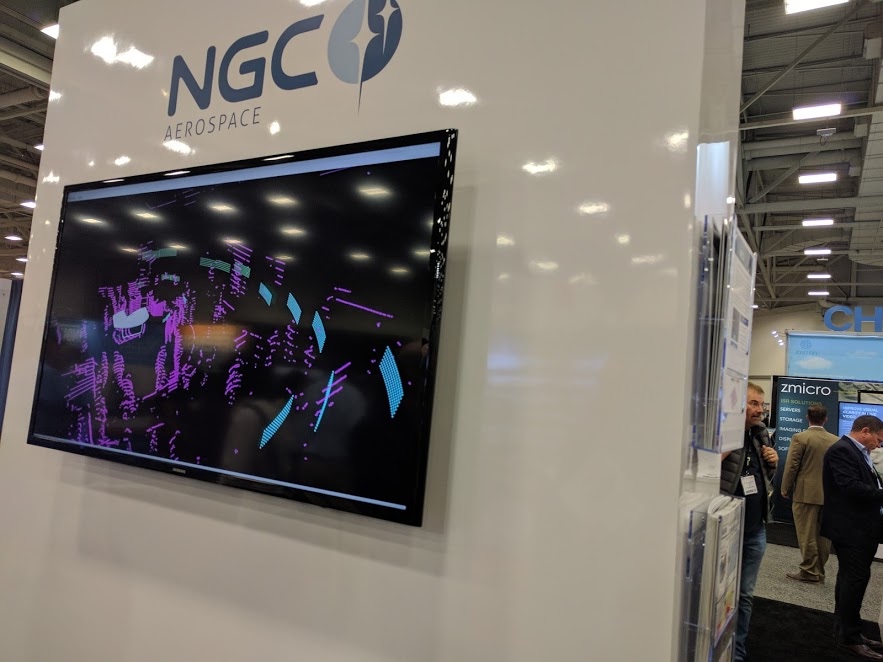 The three sensors all differ from the traditional 360-degree 2D linear scanning heads that we see implemented on most mobile and UAV mapping systems. This is because data collection is typically performed at nadir to the UAV platform, so 70% of the data collected by a 360-degree spinning laser will be of the sky or the UAV platform itself. As a result, these sensors can be very inefficient for UAV mapping procedures.

The sensors I’ll highlight in this post are analogous to what I will generically describe as array-based or multi-axis scanning. With these sensors, we need to consider that areas (i.e., arrays) of data are being collected, rather than single points on single scan lines. Another characteristic of these array-based designs is that the energy from the sensor can be focused on the target. Typically, these sensors are also solid state, a technology that enables the production of smaller sensors that require less power.

All these characteristics are attractive for UAV-sensing applications. One caveat is that these sensor technologies are still relatively early in their development, so many are still in prototype phases or have had products on the market for relatively short periods of time. While they may not be the finished article, there are still opportunities.

Founded in 2007 as a spin-off of the Institut national d’optique (INO) in Quebec, Leddar has been in the news for a few years now. However, XPonential was the first time that I had seen a LeddarTech product in operation (mounted on Laflamme Aero’s unmanned helicopter). Leddar uses a version of solid-state lidar that they claim has a high range-to-power ratio, advantages in the detection of targets in low-visibility conditions, and the ability to resolve multiple targets using a single detector.

The specifications that I have seen on the LeddarTech website indicate a <5cm relative accuracy, meaning that the error budget is likely too high for mapping. However, the other characteristics are advantageous in autonomous navigation, where objects need to be sensed, detected and classified in real-time. 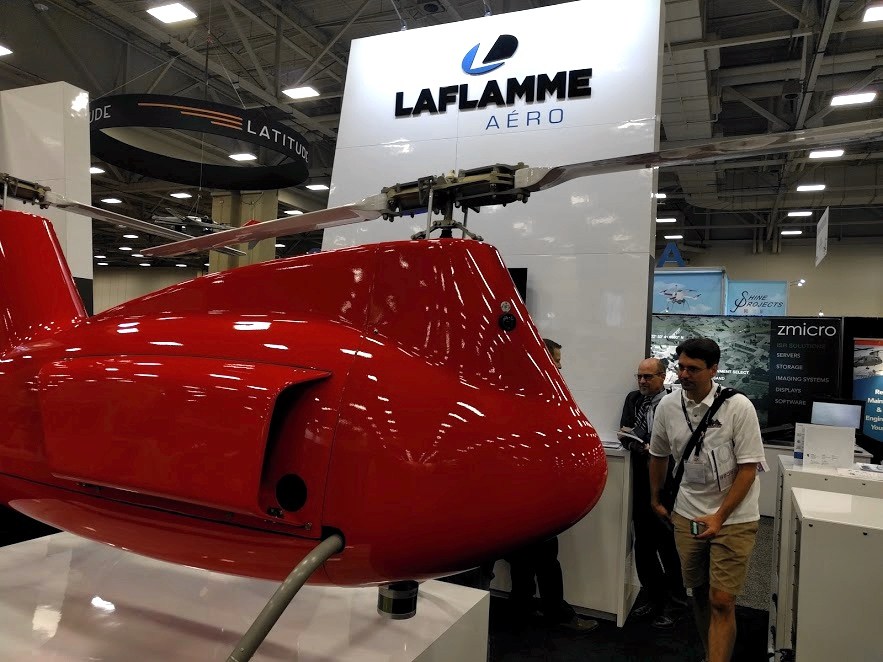 ASC (Advanced Scientific Concepts LLC) use the term “3D Flash LiDAR” to describe their implementation of array-based sensing technology. I have seen ASC technologies at events, but had yet to see them in operation until last week when I visited the booth of BrashTech, one of ASC’s customers. There, the ASC Peregrine was mounted on a UAV alongside a camera for collecting color 3D models in real-time.

BrashTech’s particular implementation enables collecting structural models for inspection of cellphone towers. Until recently, my assumption was that owners of these assets already know the dimensions of the structure—they are constructed of standardized parts—and this means they’d likely want to use drones to photograph the asset and inspect for corrosion, serial numbers, and so on. After talking to BrashTech and ASC, however, I learned that these owners often need to measure antenna angle, and this would be difficult to measure photogrammetrically, without a lidar sensor. 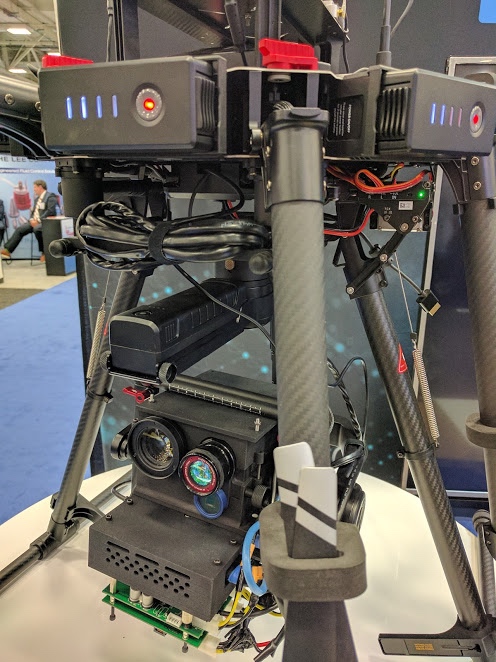 I also learned that when array-based lidar sensors are combined with inertial navigation systems for direct-georeferencing workflows, there is an efficiency improvement to be had. This is because the system needs to reference only one array of data rather than a score of individual points.

When a system like ASC’s Peregrine lists a relative accuracy specification of around 4cm, it may need to be tightened up for survey. However, I’m beginning to see the potential of array-based technology for this kind of application.

Finally, I met the company Z-Senz from Maryland in the ‘start-up’ section of the exhibition floor. Z-Senz was founded just over a year ago, but already has a product in testing that looks promising for UAV mapping due to its size, scan characteristics, and specifications.

First, it weighs 225 g. They also told me it uses a 2-axis type of scan pattern, meaning that it would provide similar benefits for focussing all energy at nadir from a UAV platform for area-based data capture. The tested relative accuracy was also closer to the specs required by the error budgets of surveying and mapping projects—but this I will leave for later posts, after the product has been formally announced.

Opportunities provided by sensor development in the UAV sector

While they might not be ready, or at this stage designed for survey and mapping purposes, there are definitely opportunities in the UAV space for new sensor types that are designed for efficient data collection, and boast units of a smaller size, with lower power requirements.

Importantly, none of these products were repurposed, and all of them were designed specifically for UAV applications (i.e. autonomous navigation and rapid 3D model creation). The efficiencies that these new array-based lidar sensors could bring to UAV mapping tasks are obvious, and I look forward to seeing how the principles, technologies, and specifications evolve into better UAV scanning technology with fewer compromises.