For maximum and sustained success, a strong private/public partnership must be at the core.

In a 1969 newscast, Walter Cronkite declared Chattanooga, Tennessee the “dirtiest city in America,” referencing a report from the Environmental Protection Agency and putting a spotlight on the manufacturing hub. Some call that moment out as a turning point for the city, and fast forwarding to today they are one of the shining examples to which other mid-size, and even larger, cities look. Chattanooga is, by some measures, the top city in the United States in terms of broadband access and speed, and is on the forefront of all kinds of innovation, including around the development of the smart city concept.

The concept of a connected “smart city” is certainly not a new one, with science fiction authors dreaming up these set ups throughout the 20th century. About 10 to 15 years ago, alongside the rise in mobile technology, real-world smart city concepts started their ascent up the Gartner Hype Cycle, becoming an inescapable buzzword in some circles. While the hype slowed down a bit, development did not, and at a time now when things like 5G are becoming reality and technology like 3D perception systems and Internet of Things (IoT) sensors are rapidly improving in terms of both power and accessibility, smart city development is coming back to the forefront. It’s not an easy process though, and most of our thinking about the concepts are around the finished product and what they could add to citizen’s lives.

It’s of course worth considering these pieces, as it doesn’t make sense to start something without a vision of the finished product, but these forward-looking examinations can often ignore the legitimately hard work required to actually build up these systems. There are barriers to entry for both the private companies offering the necessary technology and the public entities charged with implementation and public buy-in, according to those with experience on either side. Reaching the finish line, they say, is rarely a straight line, and crucially requires significant and mutually-beneficial partnership between the two sides.

In thinking about the conditions needed to start building up a true smart city concept, both Lena Geraghty, Director of Sustainability and Innovation with the National League of Cities, and Dr. Mina Sartipi, the Founding Director of the Center for Urban Informatics and Progress (CUIP) at the University of Tennessee at Chattanooga, agreed that strong broadband access is the key from a public perspective. “The foundation of a smart city solution is having broadband internet be ubiquitous throughout the community,” as Geraghty puts it. Both point to EPB, Chattanooga’s city-owned broadband provider, as a big reason why that city has become perhaps America’s most innovative.

There’s also a sentiment shared by some on the private side, including Seoul Robotic’s Vice President of Business Development William Muller, that small and mid-sized cities like Chattanooga, among others, are the best place to test out tools in practice. Seoul Robotics has deployed their lidar-based 3D perception systems in partnership with Chattanooga, and Muller says it can be easier to form those key partnerships on a relatively smaller level, as bigger cities “don’t want to be the test subjects.”

Coming into these discussions and in thinking about this article, the first instinct was to figure out which types of technology make the most sense as a starting point, whether it be these 3D perception systems or something else. Everyone agreed, though, that this was the wrong way to think about it. Instead, two themes came up. One was the benefits of “starting small,” with Geraghty, who formerly worked for the city of Portland, Maine, noting that one of the first innovative programs in Portland was adding sensors to street lights to optimize energy use, a relatively light lift for implementation which led to cost savings that helped implement other programs down the line. Similarly, Muller notes that Seoul Robotics has started with smaller, more focused technologies like the wrong-way driver detection system to start a relationship with a local government and not overwhelm.

More important than that, however, and a point echoed by everyone who spoke to Geo Week News for this story, was that cities shouldn’t be looking for a tool to shoehorn into their communities, but rather tools offering solutions to specific problems faced by the area. As Dr. Sartipi put it talking about Chattanooga, “we have traffic jams, but we’re not Atlanta or Los Angeles.” In other words, traffic analysis tools weren’t at the top of the list for Chattanooga, but other parts of the country may consider those tools as a bigger priority. Peter Mildon, who co-founded UK-based Viva, a smart city tool provider focused on transportation and infrastructure, echoed those thoughts from the private side of the equation. Mildon notes that when his company was first starting, they specifically targeted cities which have put a priority on moving away from cars and towards pedestrian and bike mobility, as that’s an area on which the company’s tools focus.

Above all else, though, the point to which everyone returned, as alluded to above, was the strong need for productive collaboration between the private and public entities. The process for setting these systems up is often a rocky one, with everyone acknowledging the challenges that are inherent with people coming and going from both sides of the equation. Political leaders enter and leave office while key members of companies leave for new opportunities, so having that strong baseline between each side in place helps guide the partnership through these changes. 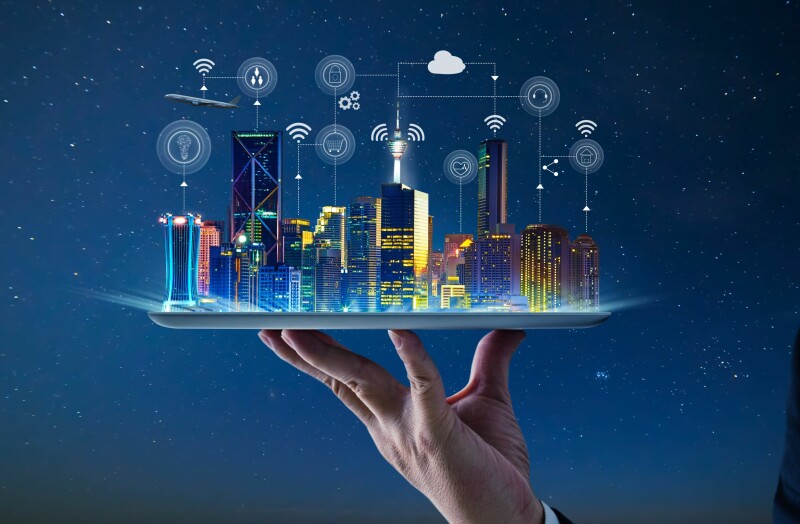 That collaboration is also necessary to another crucial piece of the equation: Public buy-in. There’s no denying that there exists some level of skepticism within the public about tech companies being involved in day-to-day life, especially around data collection. Companies like Seoul Robotics and Viva develop tools that specifically do not collect this data - this is one of the potential advantages of lidar-based systems instead of, or alongside, camera-based ones - and it’s important that the public entities make clear that data collection needs to be transparent, and that representatives from these companies can clearly explain and prove that to the public on a consistent basis. Similarly, Dr. Sartipi notes the importance of multi-disciplinary collaboration within entities, especially when speaking with the public. She notes that, with her computer science background, she may not be the best person to clearly explain these concepts to the broader public, so CUIP pulls in team members from social sciences who can more easily convey this information to large, diverse groups.

It’s fair to expect more rapid development of these smart city systems in the coming years as 3D perception and IoT technology improves, especially with increased focus on sustainability goals around the world since many of these tools complement that work. Companies are aware of this growth, too, with Muller noting that working with university students is a smart strategy for companies in this field as they can start to develop these key relationships early ahead of the expected surge, a strategy also called out by Dr. Sartipi.

That said, no one should expect the road to functional smart cities to be an easy one, as barriers exist every step of the way, particularly in the United States where companies work through a less centralized set of standards compared to places like Europe and Asia. But with a strong foundational partnership in place, a city looking for solutions to existing problems rather than just exciting technology, and a private company willing work arm-in-arm with all levels of government, the benefits can make that long road well worth it. Chattanooga has come a long way in the 54 years since that Walter Cronkite broadcast, and other cities can look to that as an example of how open minds and innovation can open the door to similar strides.