Building information modeling (BIM) has been applied to design-build construction projects for many years, and in many countries, an increasing number of which are mandating BIM for public projects. There is hard data supporting the benefits of BIM for design and construction.

While the UK government has said that “…we know that the largest prize for BIM lies in the operational stages of the project life-cycle,” there has not been hard data to support this.

At SPAR3D 2018 in Anaheim, George Broadbent of Microdesk reported the first results of a quantitative ROI analysis of the application of BIM from construction through operations for several large projects. 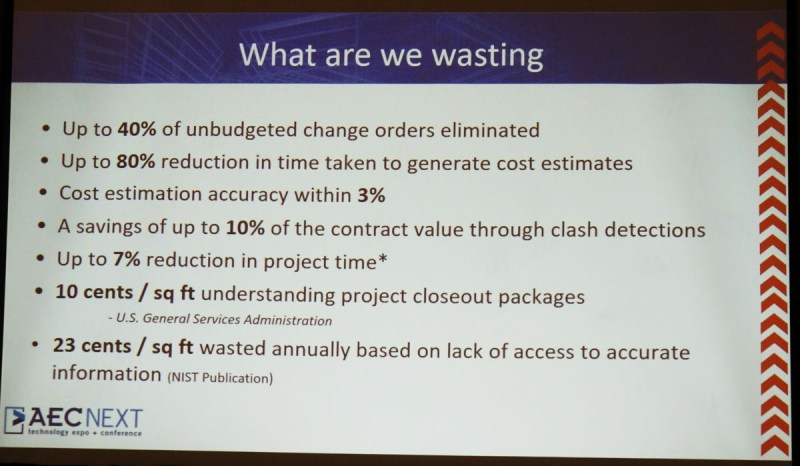 The question that George asked at the beginning of this project was “Does BIM really benefit facility operations?” There has been a lot of interest in the benefits of BIM for facilities and asset management from people in the facilities management (FM) sector and from owners, but concrete ROI data has been lacking.

On many projects, information provided by the construction contractor is handed over months after completion of the project. It can take the operator of the facility a year to go through this information to find what they require to operate the facility. This period is called the “blind spot,” corresponding to the time the facility operator is managing the facility with limited information.

Since for many types of equipment the highest probability of failure is in their first month or two of operation–just during the period that the building operator often doesn’t have access to information about warranties and extended warranties–this increases the risk of equipment and even facility failures. In addition, there is a cost associated with just finding the information required to service equipment. An NIST study across several industries estimated that the cost associated with this is 23 cents/square foot which adds considerable cost to operating the facility.

Most of the spatial and non-spatial data collected during construction is useful during operations. 100% of floor plans and most of the 3D model (geometry and associated data) are needed in operations. Some owners find that just the BIM model is adequate for managing the facility. Others augment the BIM model by a Computerized Maintenance Management System (CMMS) which adds financial, occupancy, maintenance history and other information. 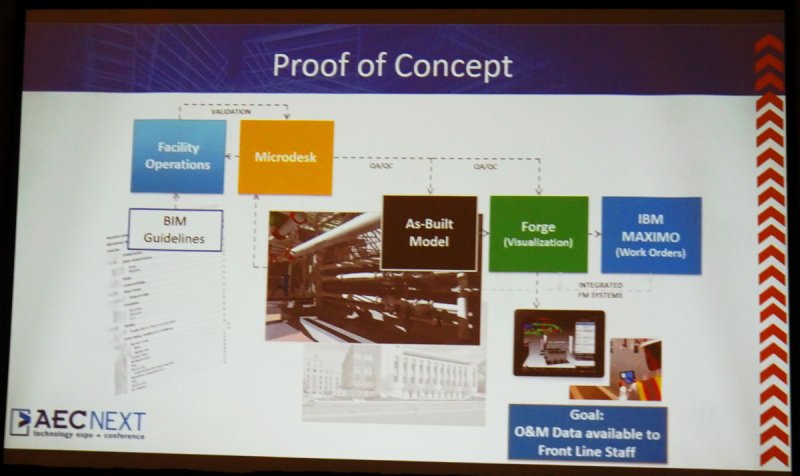 The proof of concept

For this proof of concept study, the implementation of BIM for FM used a web-based tool to provide mobile and desktop access to the BIM 3D geometry and tabular data of the as-built model, and Maximo for managing work orders.

George described several case studies including hospitals, a medical research facility, an airport, and a university. For each facility, several use cases were included in the ROI analysis. For example, dealing with plumbing leaks, electric power shutdowns, passing on tribal knowledge from senior staff to new hires, and conducting infectious risk assessment (ICRA/PCRA), and so on. 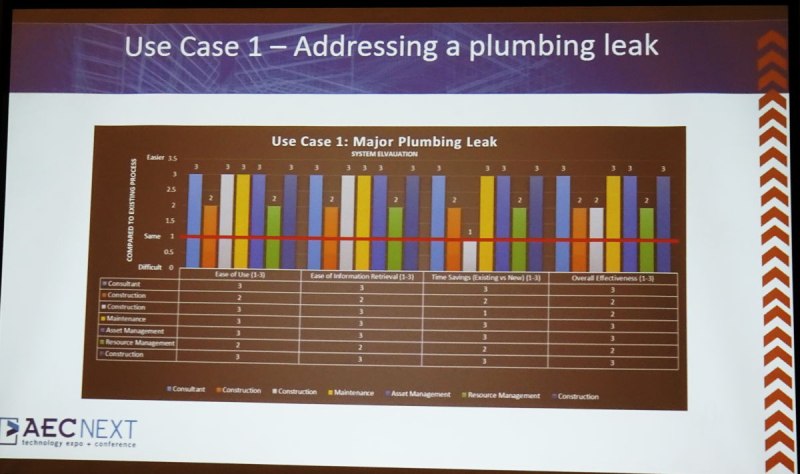 After introducing BIM models for facilities and asset management, FM staff were surveyed and asked, for example, whether they found dealing with a plumbing leak using BIM easier, the same, or more difficult than the traditional approach. The analysis quantified the time required to resolve a plumbing leak before and after the introduction of BIM.

George gave two very interesting examples of the ROI analysis related to maintenanace operations in a hospital. Passing tribal knowledge on from the older generation of FM staff to the younger involves a junior FM staffer accompanying a senior staff member walking the building for about a month. This requires about 200 hours of staff time. The hospital hires about 12 people per year so this amounts to 2400 hours per year. With BIM and virtual reality (VR) this was reduced to 22 hrs per person, a very significant staff time savings.

In another example, a review of infectious risk assessment (ICRA/PCRA) analysis in a hospital takes about 152 hrs and this has to be repeated 200 times per year. With BIM the time required to conduct these analysis was reduced to 74 hrs per review, saving 15,600 hrs annually. 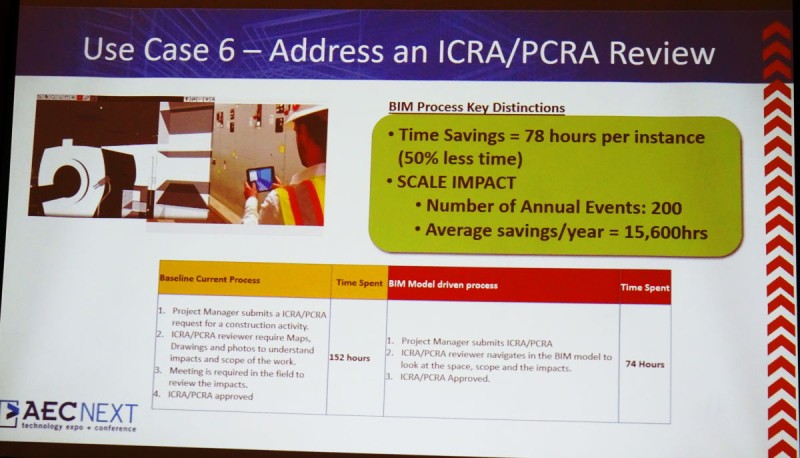 At the conclusion of five years running on the projects, the ROI analysis found a positive BIM in all cases, and estimated that introducing BIM for FM saved on average 5% of operating costs per annum. George said that it was estimated that introducing BIM reduced to the time looking for things by 83% of the 23 cents per square foot cost for doing this from the NIST study. Since operations and maintenance are roughly 75% of the total cost of a facility, these results represents a substantial savings over the full lifecycle of a building. 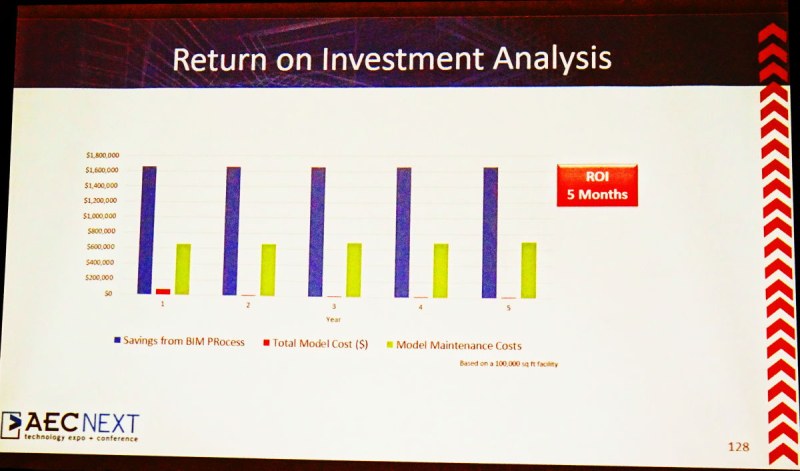 Towards an integrated BIM and geospatial approach to construction