When a prominent Danish surveying consultancy won a bid to scan thousands of housing flats, they quickly realized that traditional workflows would involve too much time per flat.

To mitigate this challenge, the firm chose the Trimble X7 for its automated cloud registration capabilities, speeding up not only the field acquisition time, but also nearly eliminating additional office processing time. The resultant 3D models have reduced tenant turnover times for the client, saving many hours and multiple visit for site evaluations and measurements.

Boligforeningen AAB is a non-profit that administers nearly 20,000 homes and flats in the greater Copenhagen area, managing and leasing these to achieve sustainability and affordable housing goals. AAB issued an EU tender to scan thousands of these units to streamline the process of tenant turnovers. With 3D models of units, estimating costs for unit refurbishment prior to the new tenancy would be reduced.

“It was fast enough – 500,000 points per second – but it was the automated cloud-to-cloud registration in the field and on the tablet that stood out. Results look to be as good as what we could do registering the point clouds in the office.”

LE34, a prominent multidisciplinary Danish surveying consultancy, sought to bid on the project but realized that a conventional scanning workflow might not provide a competitive edge to win the tender, so they looked to automate the process.

Director Anders Nygaard Møller was intreigued by a recent demonstration of a new 3D laser scanner, the Trimble X7, and worked with a distributor to acquire their first X7.

Read the full case study from Trimble below: 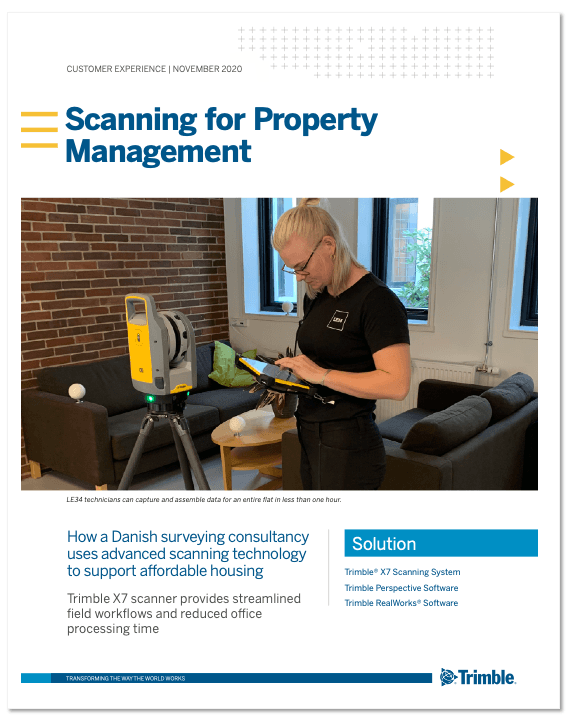