Omega Geomatics put point cloud processing to the test in a pilot project.

Registering point cloud data is a key stage in the surveying workflow and can have a significant impact on the time, cost and quality of construction, design and build or a surveying project. As an alternative to detecting artificial targets placed in the scene, features can be detected by analysing the point cloud to provide targets. Conventional point cloud processing software will typically do this by detecting basic geometry within the scene including lines and planes. Using these features to perform registration is useful if target placement in the scene is challenging, with this technique proving to be popular amongst laser scanning professionals on projects.

Conventionally, targets or features can be selected within point cloud processing software in three ways:

The Vercator® cloud uses the latter, and instead of finding basic geometry formed from a limited subset of the captured data, Vercator takes a holistic view of the point clouds. This means that the software makes use of all points to generate matching features for the initial registration.

Why cloud computing based registration?

Cloud working provides the ability to scale processing to fit the job size and removes the need for expensive hardware and software updates, consumer computer performance has become a thing of the past. By harnessing this power, it allows for accelerated and automated execution taking advantage of cloud-based parallelisation and scalability, while allowing a workflow that can be shared easily between stakeholders capturing data in the field to operatives doing data analysis in the office or anywhere else.

How value is derived – a case study

As a leading survey company, Omega Geomatics must keep up to speed with the latest innovations in the Geomatics industry. One of the areas that has seen big leaps forward in technology has been Terrestrial Laser Scanning. The latest scanning packages have on-board processing and intelligent sensors to help with scan placements.

Before looking at investing in new equipment mid-2021, Omega was curious to see if they could prolong the life of their existing fleet of Laser Scanners using existing software in the market to improve productivity. The intention was to allow major cost savings in the annual budget for investment into other areas of the business. They initiated an R&D project with the intention of presenting the findings to their senior management team for a review before implementation of the new system, if it could be proved to provide cost and time savings.

Omega has three Faro X-series laser scanners amongst its scanning fleet. The workflow with these systems was to scan in various positions and then undertake the registration of the scans on a site laptop or desktop PC in the office. A typical registration for the laser scan of a small house (30-50 Scans) may be up to 1.5 hours of work for a surveyor. Typically, the Surveyor would carry this out on a separate day in which they have a few projects to register.

Omega looked at various software packages available and after some research it seemed that Correvate's Vercator software looked the most suitable for their needs. Omega carried out a pilot project with Vercator to assess its performance, which you can read about further down this page in the pilot project section.

Vercator is an entirely cloud-based software in which the scans can be uploaded and registered on the cloud direct from site. The software also has a mobile app that allowed the on-site registration to be undertaken. This was the aspect that most appealed to Omega as they had seen that the 'fitting together' element of scan registration was the most time-consuming part of the process. It is also the one part of the process where 'human error' can greatly influence the end accuracy of the project which can come from scans being misaligned with one another. The app allows the Surveyor to place and link the scans together in a network. By linking the scans together, the Surveyor can, at a glance, check that his registration network is correct and the algorithm within the software will link the correct scans together during processing. 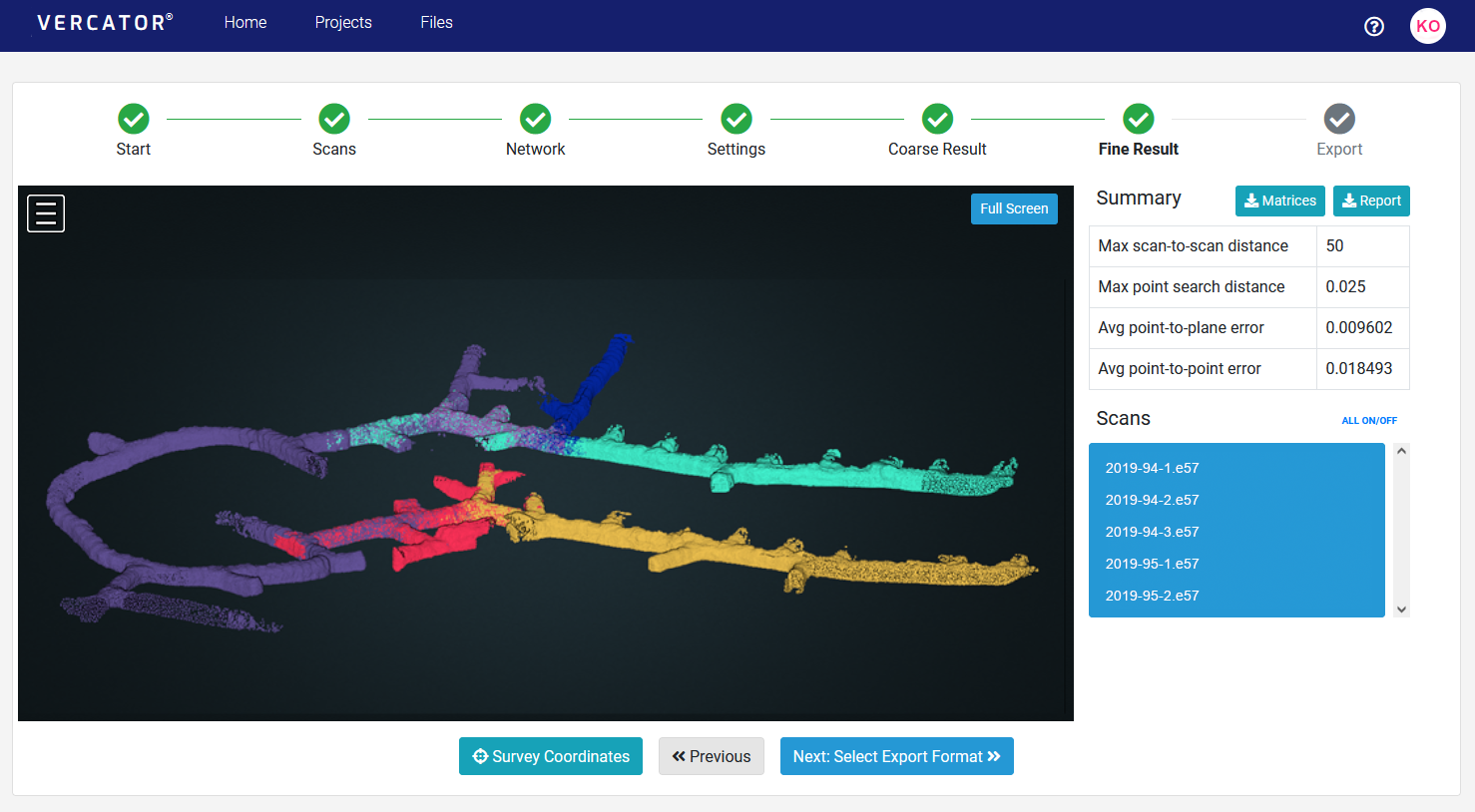 The pre-existing process Omega had been using was an office based initial Top View registration of a cluster of scans using Faro Scene, then a cloud-to-cloud registration. If the building is repetitive then the risk of incorrect placements is increased due the software not being intelligent to understand exactly which scans should be linked to one another. Manual registration would then be required to move the scans into their correct placements. This was an area of inefficiency within the business that they wanted to eradicate when these older scanners were used on projects.

From Omega’s first successful pilot it was clear that there were cost & productivity savings by using Vercator, and Omega would be able to continue to use their existing scanners without upgrading to newer models. These savings are scalable relevant to the size of a scanning project. The larger the project, the greater the cost savings achieved.

Site time: existing and new methods are similar. We have not recorded any difference to date. We have seen Surveyors are able to use the app and upload with no change to the site time we have quoted for.

Office Time: Time spent in Faro Scene was twice the time cost of processing in the Vercator Cloud with the requisite saving in labour. In Vercator, the main office processing was the application of the Survey control. There are also very brief log ins needed to start the export of the data, but these take less than a minute and can be done remotely by any member of staff.

“The time saving on this project’s office time was around 83%. This was a significant productivity saving and after several supervised tests the software is now in full use after sustained results. As a minimum we had previously had 1.5 days a week of processing that the 3 scanning teams would create, which is no longer required as the teams are able to process on the same day. This equates to a significant saving in fees per week while allowing us to take on more work.”

To find out more or arrange a demo or trial, visit vercator.com