It’s not every day that the Governor of Nevada is on stage alongside the CEO of one of the world’s leading trade show organizers with the Mayor of Las Vegas in attendance, but these industry and political leaders were just a few of the people in attendance for the ribbon-cutting ceremony of the new West Hall at the Las Vegas Convention Center that happened on June 8th, 2021. The ceremony took place just before the official opening of the World of Concrete, representing the first major trade show to take place in Las Vegas since the beginning of the COVID-19 pandemic.

Nevada Gov. Steve Sisolak and CEO of Informa Markets Charlie McCurdy were onstage at the ceremony to commemorate and celebrate what Steve Hill, LVCVA president and CEO, said was an “important day in Las Vegas,” although he was quick to point out that it was much bigger than the 1.4 million square foot West Hall expansion. The opening of World of Concrete signaled the opening of live events, conventions and trade shows across the country.

“Over the past fifteen months, the live event industry has disappeared,” Hill said. “In Las Vegas, that has meant tens of thousands of people out of work. Over $11 billion dollars a year for Las Vegas in economic impact was just gone. We needed to get live events back up and running, which makes this a big day for our city and our industry.”

Hill thanked Governor Sisolak for allowing construction at the West Hall to continue at the Las Vegas Convention Center expansion in the early days of the pandemic. Sisolak viewed construction as essential on multiple levels, enabling the expansion to be completed. Effectively balancing the needs of the community with the health and safety concerns of workers put the city and industry on a path to reopening that will expand in a big way for the rest of 2021 and beyond. 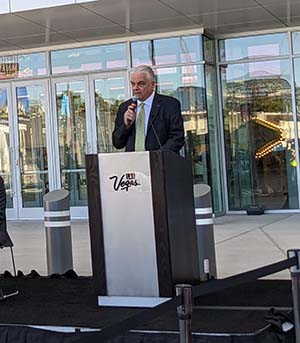 “Everything we’ve done has been rooted in a strategy for economic recovery,” Sisolak said. “This expansion puts us in a position to host more and bigger events. We’ve got a bold vision for the future and we want everyone to know there is no safer or better place to hold a convention.”

Sisolak mentioned that WOC was a fitting event to open the facility and reopen the industry, as concrete is the most commonly used building material in the world. It provides a literal foundation for some of the most ambitious projects in the world, and that same type of figurative foundation is what the future of the meeting and convention industry will be constructed upon.

That figurative foundation was fully defined back in March when McCurdy pushed for and received a commitment from city and state leaders to know that WOC could safely host a large gathering by June. The details and logistics to sort all of that out were challenging, but the perspective that McCurdy shared around what it meant to effectively collaborate and come out of such discussions with a plan that made sense for everyone underscores how this figurative foundation will be further cultivated.

“I just want to give a round of applause to the human spirit,” McCurdy said while adding his own support. “We’re thrilled to be part of this moment as tradeshows return to the United States.”

When the question of who would hold the scissors to cut the ceremonial ribbon came up, everyone on stage turned to McCurdy. After making the cut, the stop signs literally shifted to being “go signs,” signifying a major shift for Las Vegas and the live event industry. 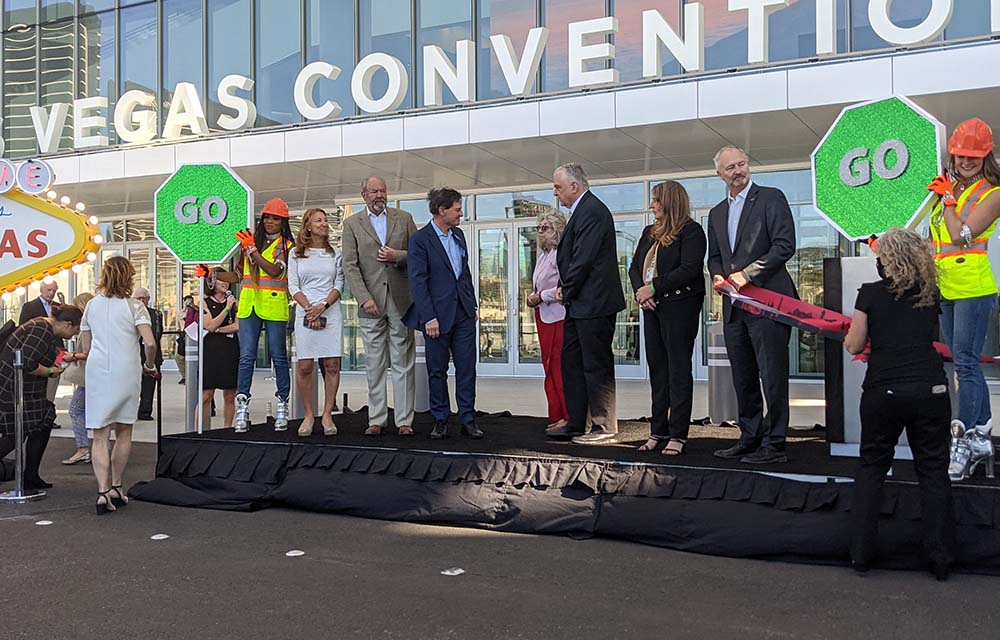