David Smith has been working with 3D technologies for longer than many of us have known they exist. He wrote the first real-time 3D adventure game for computers in 1987. He founded Virtus corporation with Tom Clancy (*that* Tom Clancy) in 1990 and the two produced Virtus Walkthrough, the first real-time 3D design tool that you could run on a computer costing under a few thousand dollars. Smith used 3D modeling to save James Cameron save a bunch of money when he was making The Abyss, and he helped create Red Storm Entertainment, which went on to produce the uber-popular game series Rainbow Six.

As impressive as that is, it’s the work he’s done lately with Lockheed Martin and as CTO of virtual-reality hardware company Wearality that is most worth your attention. The company intends to create a real-time 3D collaborative reality Smith calls “The Augmented Conversation,” and bring it to more than a billion people with affordable AR and VR glasses.

He promises that it will change the way we communicate. Read on for more about Smith’s vision and a sneak peak at his keynote at SPAR 3D 2016.

SPAR 3D: Can you tell me a bit about how you got involved with Wearality? 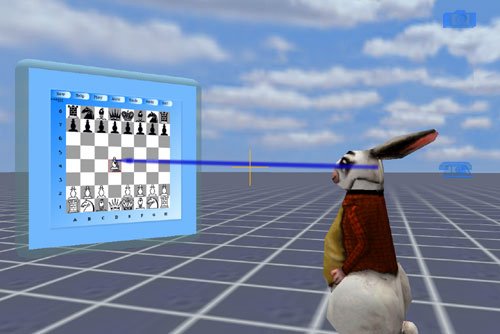 David Smith: In 1990, I started working with Alan Kay, who was the father of the first computer, and a Turing Award winner. We started exploring collaborative computing—essentially multi-user 3D spaces.

We joined forces in 2000 when Alan was at HP Labs as a senior fellow and we built a system called The Croquet Project, which is a multi-user 3D real-time collaboration engine. It lets you share documents, share 3D objects, create things inside that space collaboratively. That was extremely interesting, extremely powerful, and it’s the basis of everything I’ve been working on. It’s about collaboration, and letting multiple people communicate in 3D.

SPAR 3D: How does that tie into your work with Wearality to build VR and AR devices? It doesn’t seem like an obvious fit.

David Smith: The lenses we developed [at Lockheed Martin]are what you would use for a high-end flight simulator. There’s a super wide field of view, we can get 180-degrees per eye, in focus everywhere, perfectly clear. And we did that with both a VR lens and an AR lens, which can get up to 140-degree field of view. And that will be part of a product in a few years.

With both of these technologies at Lockheed, we decided to start a new company, and build consumer software off of that. The first product is fantastic, but the new one coming out in October is head and shoulders above that. So, we’re really going to have something that’s extraordinary, and extraordinarily different, and very affordable.

The longer-term goal is what I call the augmented conversation, where you and I are talking, and as we talk the computer does a simultaneous simulation of the things we’re saying. It’s a full participant, and it rapidly creates stuff as we’re engaged, and both of us can interact with it. It’s sort of a living, breathing white board that expresses those ideas and allows us to explore those simulations.

SPAR 3D: Is that what you’ll be presenting on at SPAR 3D? 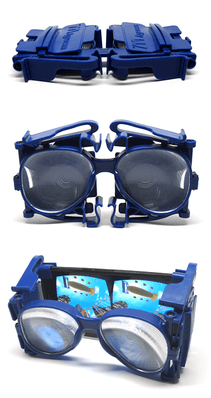 David Smith: Yeah, I’m talking about affordable mobile VR, but it’s going to go like this: “Here we are, this stuff works, it’s great. Look where we’re going.”

I think we’re defined most by how we communicate. So if we’re expanding the scope of how we communicate, we’re expanding the scope of who we are in a fundamental way and I think this may be one of the biggest transitions for human intellect, human capabilities. Everyone becomes superman. Everyone can think things, do things that they couldn’t otherwise, and every new app becomes a micro super power that is added to your abilities.

SPAR 3D: When we spoke to Wearality’s Michael Jones a bit back, he had talked about bringing augmented reality to a billion people. Is Wearality’s goal to bring this “augmented conversation” to that many people?

David Smith: I think about the cell phone today. There’s more than a billion cell phones in people’s hands, but those cell phones are also gateways to the most important information system ever created. Those billion people are extraordinarily powerful—they have the world’s libraries in their pocket. That was transformative.

All we’re doing here is creating AI around that, that gives you that control, and a platform around that that’s always on and always expanding your intellect and abilities. And particularly your ability to communicate.

SPAR 3D: Once this augmented conversation becomes a reality, what sorts of things will it enable people to do that they haven’t done before?

David Smith: That’s a really good question. You know it’s a cop out, in a sense, to say that I don’t know. I know it’s going to be marvelous.

Let me give you a little bit of history to explain why I don’t know. When Steve Jobs and Steve Wozniak shipped the Apple II, they originally said it was going to be a home hobby computer. You’ll play games with it, and maybe there will be some educational applications for it, but Dan Brickland, who was at Harvard B school at the time, saw the system and said “that’s a system I need to build a spreadsheet application on top of.”

He invented spreadsheets, and the place he put it was the Apple II. Once he did that, once VisiCalc showed up, sales of the Apple II increased month over month by three fold. It was like it was on a rocket. So the Apple II is a spreadsheet engine. And still, when you think about PC computing, it’s still very much that enterprise-centric thing. Games are still important, don’t want to take that away, and all the other media subsumed by it.

But Apple did not know that was going to be the center of their world. It was other people who made that happen. So, it’s not to say that Apple was surprised, but it was not their definition of what the platform would be.

SPAR 3D: So, you create the platform, you put it in the hands of creative people who understand how it works, and then they figure out what it’s best for?

Four Facts about the Current State of AR for Enterprise